ASUS Zenbook vs Vivobook – Which Series is Better?

When we’re looking at ASUS laptops, there are many different series of laptops out there for us to consider. Two of their main models are the ASUS Zenbook, and the ASUS Vivobook.

To the untrained eye, it can be difficult to tell the difference between these two and know which one of them would be the better choice for you. Of course, this will come down to the model of laptop as well.

But as a whole, which one of these would be the better choice; the Zenbook or the Vivobook? Well, let’s look at both ranges to get a closer look at the two.

The main difference between the ASUS Zenbook line and the Vivobook line is that the Zenbook is a more expensive, premium range of laptops. Most of the ASUS Vivobooks that have been released are targeted as those looking for a budget friendly option.

It’s quite difficult to compare a whole line of laptops to another one, but this is the short answer to a much longer response. They really appeal to two different sets of people entirely.

Even though both of these are “books”, don’t get confused and think that they may run on the Chrome OS (a common mistake!). For the most part, both of these laptop ranges run on the Windows OS, and they’re very popular amongst those looking for a good deal on a new laptop.

So how else do these two different ranges of laptop differ to one another? We’re going to check things out in more detail.

If you’re after some of the best laptops that ASUS have to offer, then you’ll want to look at their Zenbook range. Although many of them are not that expensive, their best models can undoubtedly go toe-to-toe with some of the biggest brands out there.

They have been around for almost a decade now, with the first Zenbook being released all the way back in October 2011. ASUS had been trying to create an attractive laptop line for a while, and the Zenbook has been one of their bigger successes in the field.

As you may have guessed from the name, they are well known for their simplicity. They are considered to be one of the most attractive laptops on the market, typically designed with an aluminium chassis. For those looking for something elegant and premium, the Zenbook range is probably worth investigating.

The Zenbook series is the higher quality of the two ASUS ranges, and they’re likely going to last longer than a Vivobook.
There are more options with the Zenbook line, and they’re not all expensive options. You can find some cheaper deals, too.
A Zenbook will be more suitable for designers, video editors and those looking to use large programs.

Of course, with higher quality comes a much higher price tag. These laptops can go up into the thousands very easily.
The display of the Zenbook series is fine, but it’s nothing exceptional.

One of the best Zenbook’s that’s been released in the last few years is the UX534. It is essentially ASUS’s answer to the Dell XPS and the Thinkpad, and it offers great value for money.

For a similar price to the aforementioned laptops, you can get a 16GB powerhouse with a Intel core i7-10510U processor (4 cores, 8 threads). It has an inbuilt screenpad that allows you to navigate your apps very easily. You can read more about it in my list of the best ASUS laptops.

As well as this, it has a NVIDIA GTX 1650 graphics card too. Although the laptop itself is not specifically designed for gaming, this is a gaming level GPU, which means that it is very capable of recreating some amazing visuals.

There’s a good selection of different styles of laptop within the Zenbook range, like the UX463, which is a 2-in-1 model. For the more premium tier ASUS laptops, you can look at the UX481, which is an expensive yet high quality laptop.

For those looking for something cheaper, then the Vivobook range of ASUS laptops is likely to be more suitable. The majority of the models that they release are either 4 or sometimes 8GB of RAM, and they’re always very reasonably priced.

This range isn’t the one that you want to choose if you’re trying to get the best quality possible. Generally, the parts that are used to make Vivobooks are pretty cheap, and you can see the difference in quality between the two ranges. But for those looking for something cost effective, then often the Vivobook is a great choice.

You can definitely find some good bargains with the Vivobook line of laptops, with many of them being lower priced.
Although they’re cheaper laptops than the Zenbook’s, they still tend to have good screens and displays.
Across the board, the battery life of the Vivobook range isn’t much lower than the Zenbook range.

With lower prices comes lower parts, and in general the Vivobook line doesn’t have the same quality as the Zenbook line.
A Vivobook laptop is going to have a shorter lifespan than a Zenbook, so don’t expect it to last more than 5 years.
There isn’t as much range with the Vivobook line, and there’s only a few Vivobook’s which I’d actually buy (listed above!). 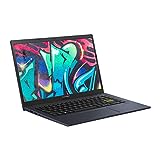 As I mentioned, the Vivobook range is generally there for more budget friendly laptops. One good example of this is the ASUS VivoBook X413FA, which is one of the top low cost laptops on the market.

You can’t find many 8GB laptops within the £500-600 range like this one – it has the specs of a much more expensive laptop. Along with this is 512GB of storage, which is helped by the 32GB of Intel Optane memory, which allows the storage and RAM to connect to each other faster.

It’s a very responsive laptop, with a well designed touchpad and backlit keyboard to match. The display of this laptop is also good, with a thin bezel to make the most of the screen size. All in all, it’s just a pretty great budget laptop.

There have been good laptops released under both of these different lines of ASUS laptop. In general, those looking for a lower priced laptop can start by checking out the range of Vivobooks that ASUS offer. If you’re looking for something of a better quality, then you might want to check out the Zenbook, which are some of the top laptops that the brand offer.