As one of the most popular sizes, finding a good 40 inch smart TV should be pretty straightforward. However, there actually isn’t that many different options out there on the market, and finding a good model can actually be pretty difficult.

Which smart TV should you end up going for? Well, we’re going to look at some of the best models, as well as going through what you should consider when you’re looking for a 40 inch TV.

You also might want to check out the 50 inch TV‘s we recommend too if you want something just a little bit bigger. But for now, let’s look at some of the most recent options available.

The problem with 4k televisions is that they come with a high price tag attached to them. If you’re looking for a more affordable 40 inch TV, then you could look at going with a brand like Hisense, who make some of the best budget options around.

The main thing that you’re looking at is the picture quality, and this model has a 1080p resolution. This is going to be great for most people, and when you’re watching the TV from a distance anyway, it’s difficult to tell the difference between resolutions. A 4K TV is really made for those who want the very best.

But this model manages to still produce a great picture, and it has a good sound system installed too. This uses Total Surround technology, which helps to produce a more complete sound, and is pretty good considering the TV’s low price.

It’s quite easy to get this TV up and running with a quick set up, and it’ll come with all of your favourite apps installed. like Netflix and YouTube. It also has a web browser built into the TV too, which you can use to explore the internet.

Overall, this is a budget 40 inch TV and for the price, it’s hard to find anything that competes with it. There aren’t many smart options when you’re looking around this price, and this is the best of the bunch. 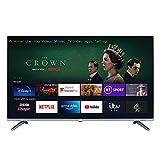 If you like the layout of the Fire TV operating system, then it may be worth getting a smart TV that already has it installed.

It has 3 HDMI inputs that you can make use of, as well as an optical cable connection port too. Whilst you can connect to it using an ethernet cable, you’ll likely want to take advantage of its built-in wifi and Bluetooth instead.

Even though it’s not 4K or HDR, the picture that this television manages to produce is pretty strong. It has a high 5000:1 contrast ratio, which provides deep blacks and an overall excellent picture.

The only thing that I don’t really like about this Fire TV is that you have to sign in with your Amazon account to use it. And if you’ve used a Fire stick at home already, then you’ll know that there’s quite a lot of ads in the interface.

But aside from this, for those that want a TV with a voice assistant built-in, you can’t get anything more seamless than a Fire TV. It will work with your home Alexa easily, as well as any streaming services you want to watch.

Another cheaper option for those looking for the best 40 inch smart TV on a budget is this Blaupunkt 40/138Q, which has a basic design but does everything you could ask it too.

One good thing about this television is its connectivity. It has a ton of different ports that you can connect to, including 2 HDMI ports and 3 USB ports for you to use too.

Whilst the picture that the display manages to produce is good, the audio quality is even better. It uses in-built JBL speakers in the television, and it manages to deliver some good bass. It’s good for TV and films, but it’s also good for just listening to music too.

Getting a good quality smart TV for a low price isn’t that easy. But this model manages to do this pretty well, as although it’s not particularly expensive, it’s definitely well made and a fine option for your lounge or bedroom.

Okay, so this one’s a little bigger than the specified size, but the Samsung 43″ TU7100 is too good to be omitted from this list. It’s only marginally bigger than the other televisions listed here, and its quality means that it definitely deserves a mention.

This 4K Ultra HD 43 inch TV has support for all of the popular UK apps, and it manages to produce a solid image quality overall. The high dynamic range definitely helps when watching movies, as it’ll allow you to easily see the darker images on display.

With the stand it’s less than 200mm in depth, making it very easy to fit into your living room or even in your bedroom. This LED TV also manages to produce excellent audio too, so it’s unlikely you’re going to need to order an extra soundbar (which is often the case with cheaper models).

So, if you’re looking for a 4K Ultra TV, then this one is quite hard to beat. As long as you’re okay with an increased 43 inch display, then it’s worth looking at the TU7100.

The Sony Bravia range of televisions that has been released over the last few years has been really impressive, with this model KD43XG70 being one of the top 40 inch smart TVs available on the market. It actually measures at just over this, with a 42.5 inch size.

For some people, a 4k television will be too expensive. However if you can afford it, this is the kind of size where you’re going to be able to see the massive difference between 4k and a standard 720p or 1080p resolution. It’s the perfect TV for setting up your own home cinema with, and it’s ideal for watching movies on.

It isn’t just the video that’s pretty good with this TV. The audio speakers that it uses are quite strong as well. Even though the slimline design of this TV doesn’t afford a ton of room for in-built speakers, they still manage to pack quite a lot of power.

This model also has a well built stand and its legs are sturdy, but it would also be perfect to be mounted onto the wall if necessary too. It has 3 USB ports that you can use, as well as a HDMI connectivity too.

Overall, this is definitely one of the best options available for those looking for a smart TV that produces an amazing picture, which is the most important thing for the majority of us.

For those looking for something a little better, then you could consider this Panasonic TX-40GX800B television. This is a high end model, so bear in mind that it comes with a high end price tag to match.

The main reason why this model is so expensive is that it uses both Dolby Vision and Dolby Atmos Sound. Dolby Vision is essentially that it optimizes that pictures on your display, giving you a cinema quality finish.

The colours on your screen will be brighter and more vibrant than most other options out there. It has specific gaming modes and sports modes, which are optimized for the different types of use.

Adding Dolby Atmos sound into this too is another massive plus and something that will interested movie lovers. It helps to give you more of a surround sound experience, and it’s a step up in quality compared to other 40 inch TVs.

In addition to the high quality video and audio, there are other good things to note too. It’s very easy to connect any of your Bluetooth devices to this TV, and it works excellently with any smart home devices you have as well, including both Amazon Alexa and Google Home.

So, if you’re looking to take advantage of Netflix and Amazon Prime 4K streaming, then this Panasonic TV is going to be the perfect choice.

One of the most common questions about 4K and televisions in general is whether it’s worth you opting for a 4K resolution. For the most part, 40 inches is around the size that you’re going to start to see the difference in resolution – it’s usually not worth opting for a high resolution in a smaller TV. But at 40 inches, if you want the best option out there, then it’s a good idea to opt for a 4K television. This way, you can be sure that your television is going to be good for the next decade.

If you’re not entirely sold on the television to purchase, then it really depends on a couple of things. Where are you going to use the TV? If it’s your main TV in the lounge, then I’d opt for a 40 inch. If it’s a smaller TV in a secondary room like the kitchen or bedroom, then maybe a 32 inch model would be the better choice.

The distance that you sit from your 40 inch TV is going to be different for everyone, and it will really depend on your own preference. However, it’s sensible to sit at least 1.5m (5 feet) away from your TV at a minimum, as sitting too close could lead to eye strain.

Is a 40 inch TV big enough for gaming?

Overall, a 40 inch TV is going to be the perfect size for the majority of people out there. It’s large enough that having a good resolution is going to be a necessity, so opting for at least 1080p is probably going to be a wise idea. But if you want to, many people would probably advise that a 4k model could give you an even better viewing experience.

Why? Well, there are a few reasons you may actually want to opt for 4k if you’re looking for a 40 inch television. This is largely down to the resolution and our expectations, as you would even notice the resolution difference between 1080p and 4k on a smaller 32 inch TV. The decision between the two will really come down to where you’re using the TV itself.

If you are in the living room watching from a fair distance, then a 4K TV might not be a necessity. But if you’re in the bedroom at a closer distance, then it could be worth paying out a bit more.

What is Rakuten TV? Full Review

TV vs Monitor – How to pick between the two