If you’re looking for an immersive experience, then buying a 75 inch TV is one of the best things you can do. They’re some of the closest options you can get to having a cinema in your own home (reasonable options, anyway).

But when you’re looking to buy a large TV like this, you want to make sure you get the right model. They tend to be pretty expensive, so ensuring that you make the right choice is important.

But how can you tell which 75 inch smart TV is the best option for you? Well, there are some things you can look out for. So, let’s look at the best models out there, and then consider what things you should be looking for in large TV. 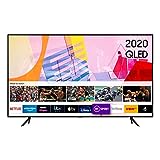 For those looking for the very best out there, then the Samsung Q60T is definitely one of the top models out there you can choose. It typically comes at a premium price point, but there are a few reasons why it’s worth it’s cost.

The most important thing to focus on with this TV is it’s high quality display. Of course, this is a 4k model so it has over 8 million pizels, but nowadays this is pretty standard for a 75 inch TV.

But it’s more than just the 4k that you should look for. This is a QLED TV, also referred to as Quantum Dot. This allows the TV to have a much higher contrast ratio, which will help to improve the overall picture quality of the TV.

A QLED will produce more vibrant colours than your standard model too. It uses a Crystal Processor, which produces a vibrant yet highly defined picture.

But a Samsung TV is generally about more than just the visual quality. They also have one of the best operating system’s in their Linux based Tizen OS, which makes the navigation of the television very easy. You’ll easily be able to find your favourite apps on the device – they have the largest collection of different apps of any brand.

This is definitely one of the best 75 inch TV’s that you’ll be able to find out there, and it should be one of the first places you look when purchasing a new TV.

Another very good option if you’re looking for a high end 75 inch TV is this Sony Bravia KD75XH80. It’s fairly expensive, but it’s got a lot to offer.

This television is made with Dolby Vision and Dolby Atmos. Atmos ensures that you’re going to get strong audio from the TV, enough to create a good atmosphere when you’re watching a film. It’s very good for voice clarity too, and you’ll be able to hear the actors on your screen very clearly.

Dolby Vision is essentially the standard the most brands are trying to meet when they’re creating a home cinema experience – it’s basically having a Dolby Cinema quality movie in your own home. Generally, it will help to make the picture appear more realistic, as there’s more definition in the picture on your screen.

The Bravia also has a very good array of apps for you to choose from too, including all the popular ones like Netflix, as well as newer apps like Disney+. They have more than 5000 apps to choose from in the Google Play store.

Another thing to mention about this Sony Bravia TV is that it’s compatible with pretty much everything. You can easily link it to your Amazon Alexa or Google Home device. As well as this, it also has a Chromecast receiver built in if you want to stream things, and it also has Airplay built in too. This means you can easily streaming anything from your Macbook or iPad.

So all in all, this is a TV which has pretty much everything you could need. A vibrant picture backed by strong audio and awesome connectivity makes it an awesome option to choose.

Whilst most of the time Samsung televisions are priced pretty highly, they do have a more reasonable range of TV’s too. The TU7100 is their budget range of 4k TV’s, and the largest model that they sell of this series is 75 inches wide.

Like the more expensive models from Samsung, you’ll still get the same great Tizen OS. It’s very simple to use, and has as many apps as any other smart TV out there.

This is a slimline television, and it’s the perfect choice if you’re looking for something that you can mount on the wall – of course, it’s not that easy to do that with a large TV like this one. However, due to it’s design it does look pretty good when it’s mounted.

To cut costs, there are some parts of this TV which aren’t the best quality – this includes the stands which are quite cheap, and the audio is around average. But if you’re looking for a cheaper 75 inch smart TV with full 4k resolution, then this model fits your criteria. 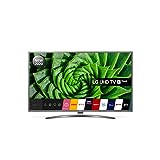 If you’re looking for a recently released TV, then you could try checking out the LG 75UN81006LB, which has a new model released in 2020.

This is an aesthetically good looking television that has a surround sound system audio, and would be a good addition to any home. It has most of the apps that you’re going to need, including Apple TV and many more.

It also comes included with the LG Magic Remote, which is one of the better things about LG televisions. This has buttons inbuilt to easy access Netflix and Amazon Prime, and an simple to use click wheel which allows you to find what you need to easily. iIt’s also responsive to voice commands, too.

The only thing that I will say about this LG TV is that it actually doesn’t come with BBC iPlayer installed on it. For us in the UK, this might be a crucial component for some people, and it won’t matter if you have your own separate Media Box with iPlayer on it. But, this is the main down-point about this TV model, which otherwise is pretty good.

For those looking for a cinema experience in the comfort of their own home, a 75 inch TV is going to be the perfect choice for this. It’s one of the largest sizes you can get with a television, and if you go any larger than this then the cost can go up a lot too. In the modern day, you can pick up a 75 inch smart TV for a pretty good price, and it’s probably going to give you the best viewing experience.

Is there a big difference between 70 and 75 inch TV?

Generally, there isn’t a massive difference when you only increase a televisions size by 5 inches. It will be around 4 inches wider and approximately 2.5 inches taller in height, so whilst they are obviously a little bigger, it’s not by a massive amount.

Because of their size, people usually wonder whether they can actually mount a 75 inch TV on their wall. Although they are quite heavy and usually weigh 25kg or more, you can actually still mount a large TV like this on your wall – you’ll just need to make sure that you use the right mount to do this. And, you’ll probably need some help with it too!

Is 75 inch TV too big for bedroom?

For those who are considering getting a 75 inch television for their bedroom, then you’ll really want to consider how much space you’ve got in there first. If you don’t have enough distance from you and the television, then you’re probably not going to be able to take advantage of your televisions size.

How far should you sit from a 75 inch TV?

For those who are going to opt for a 75 inch TV, then you’ll need to sit a significant distance away from the screen. In general, you’re going to want to sit more than 12 feet (4m) away from your TV screen to be able to see everything fully.

Getting a 75 inch TV may be one of the better decisions that you can make if you’re truly looking to get the best experience in your home. It’s the ideal size for the majority of large living rooms out there, and when you combine in with the smart functionality of modern televisions, it’s going to be the perfect entertainment for you and everyone else who wants to watch it.