When you’re trying to find a budget laptop, then one of the first brands that you might look for is Acer. But even though they’re mainly a maker of cheap laptops, that doesn’t mean to say that they don’t have some good quality models out there too.

Buying an Acer laptop can mean that you’re going to get something much more powerful than if you opted to go with Apple or another expensive brand. So for value for money, an Acer laptop is a good investment.

But with so many different models out there, which one is going to be right for you? Well, we’re going to take a closer look at the best Acer laptops out there so you know which one might be the best choice for you. 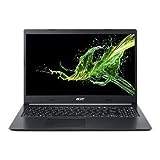 The Acer Aspire A515-55 is one of the best laptops released by Acer, which is no surprise as it makes up part of the Aspire series. Whilst they have released some poor laptops over the years under this line, this model is one of it’s best. It comes with 8GB of RAM, which is what you should be looking for if you’re looking for a capable laptop nowadays.

The RAM of this laptop is matched by a i5-1035G1 Intel, which is a quad core processor with 8 threads. It’s part of the Ice Lake generation of Intel processors, and it comes with max clocking speeds of 3.6GHz. This is pretty good, and it’s a capable processor that will be enough to do whatever you need to online, with the 4 cores capable of light gaming, Photoshop and more.

Although it’s a relatively cheap laptop, it’s actually finished off pretty well, with an aluminium cover and a slimline design. It’s undoubtedly an attractive monitor, and it offers great connectivity. This is true for both the abundance of ports on the device, but also for the Wi-Fi 6 technology that makes it very easy for you to connect to wifi wherever you go.

With a good display and sound system, it’s difficult to find anything not to like about this Acer Aspire model. It’s a great option for those looking for a top laptop on a low budget. 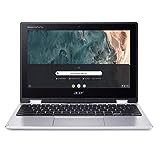 Not everyone needs a large laptop to spend hours each day on typing away. Many people out there are looking for a simpler, smaller design to use as and when they need to. this is why Acer released their Chromebook line, with the Spin 311 being one of the newer models.

This is more of a Notebook than a laptop with it’s 11.6 inch size, but what you lose in screen you make up in portability. It’s super easy to carry this laptop around with you, and it’s small size and light weight will be perfect for those looking for something to take to lectures with them.

Another feature of this flexible laptop is that it’s actually a convertible, which means that you can flip the screen around totally, and the hinge of the laptop allows 360° rotation. This model can double up as a tablet as well as a laptop you can use daily too, so it’s no surprise why it’s become a pretty popular option.

The only area where this laptop will be lacking for some is that it doesn’t come with a ton of storage (like most Chromebooks) and it isn’t the most powerful laptop either. But for those looking for a daily laptop for casual use, it’s definitely a good option.

Another cost effective Acer laptop is the Acer Swift, with this series being pretty well known by those looking to save as much cash as possible. Whilst the specs of the laptop aren’t great – 4GB of RAM isn’t particularly powerful – it’s still a suitable laptop for those who aren’t looking to need anything more than this.

Aside from the power and the lack of storage (it only comes with 128GB SSD), there are many things to like about this laptop. It’s metal chassis is made to the same standard as more expensive Acer laptops, and it’s a thin laptop that’s pretty light too. The display is great too, and will produce some perfect visuals.

It’s not just a pretty well designed laptop, but it’s made with performance in mind too. It actually has a really long battery life, which is impressive even amongst better quality laptops. It also comes with a fingerprint reader that will easily allow you to log into the device without having to enter a password.

Overall, I’m hesitant to ever recommend a laptop that only has 4GB of RAM, as they’ll likely be obsolete in the future. However, this could give you a few good years of use if you’re looking for a competent laptop to get things done.

One important thing to look at with any gaming laptop is the specs – they matter more in a gaming laptop than a regular work laptop. This model has a Intel Core i7-9750H processor, which has 6 cores and 12 threads, with a base clock frequency of 2.60 GHz. This is going to be good for gaming, and should be more than capable.

It only comes with 8GB of RAM, but you can see how you get on with this and easily upgrade to 16GB if you need too. It uses a Nvidia GeForce RTX 2060 GPU, which is going to be pretty great for gaming as well. Oh, and whilst it comes with 256GB of SSD storage installed, it also has 1TB of HDD storage too. So, you’ll be able to save multiple games without much issue with these hard drives.

If you haven’t owned a gaming laptop before, then I’d advise that you start with a model like the Acer Predator 300. It’s powerful enough to play your favourite games, and it should last a good while too.

Why is Acer so cheap?

This is a common question about Acer, and it’s a pretty simple one to answer. People see an Acer laptop with 8GB RAM and 256GB storage, which is the same as a Macbook or a Thinkpad – yet the Acer is half the price or even less. This is partially due to the brand value of the other brands, but Acer also generally use cheaper parts. Not all processors are made equal, and it’s the same for the other parts that are used to make up laptops too.

In general, Acer laptops will last for around 4 or 5 years before they’ll become outdated. At this point, you’ll need to consider either investing in a new laptop, or at least upgrading your laptop and giving it some better hardware.

Can I upgrade an Acer?

One of the best things about opting for an Acer laptop is that it’s very easy to upgrade them – this isn’t possible with some other brands of laptop that are out there. So, further down the line you can make your Acer more powerful and update it’s parts.

What country is Acer from?

Although many people think that Acer is from mainland China or even Japan, this isn’t the case. The company was actually started in Taiwan all the way back in the mid 1970s.

Is Acer owned by ASUS?

It’s commonly thought that Acer own ASUS, or maybe even vice versa. The truth is that neither company own the other, though ASUS was founded later than Acer, by ex-employees of the company.

In conclusion, there are still sceptics of the Acer brand who will avoid their laptops at all costs. This is fair enough, as I’ll be the first to admit that they’re not the same quality as other laptop brands out there. However if you do your research before buying an Acer, then you can find yourself a really good deal and a pretty decent laptop, too.