May 3, 2022 by Jon | *As an Amazon Associate, we earn from qualifying purchases

If you’re looking for a fast and responsive laptop, then a Chromebook might be the best option for you. A lot of people love the Chrome Operating System, which is much more lightweight that the alternatives – you don’t need to worry about a ton of junk software making your laptop slow.

But there are many different Chromebooks out there on the market, and it can be difficult to know which one might suit you the most. You could also consider looking at the best detachable laptops if you’re looking for something lightweight and easy to use.

However, for now we’re going to take a look at some of the top Chromebooks available right now, so that you can make your own informed decision.

The Pixelbook Go is undoubtedly one of the better Chromebooks out there right now. Google have created this laptop to try and give the simplest form of internet browsing out there, and it really works well. The device is very sharp, much faster than the majority of Windows devices out there.

The Pixelbook Go is a well designed device, with one of its most impressive features being its high quality HD display. Of course, because it’s made by Google, it’s very easy to set this laptop up with a Google Home if you have one as well. It can be a nice piece of the puzzle if you’re trying to build a complete smart home.

As well as this, the device weighs less than a kilogram, making it one of the most portable laptops around. It’s only 13mm thin too, which helps to make it even easier to carry around with you. Oh, and even though it’s a smaller design, it still manages to pack a ton of battery life into the Go. It’ll easily last a full day or more without needing recharging.

Even though Chromebooks aren’t designed to have a whole lot of storage, this model does come with 128GB of SSD space, which should still be enough to save anything that you don’t want to keep on the Cloud. If you’re looking for a high standard of Chromebook, then the Google Pixelbook Go is one of the best options out there.

Quite expensive
Whilst the keyboard is good, the trackpad is just average

Verdict: Undoubtedly one of the best Chromebooks on the market, this is Google’s best offering to the laptop world. 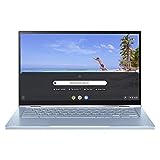 Another option for those looking for a cheaper Chromebook is the ASUS C433. It’s another impressive flip laptop that suits most budgets, as although it’s made to a decent quality, it’s pretty affordable.

This is a 14 inch laptop, but it manages to stay quite lightweight and portable due to the thin bezel design, which maximizes the screen space. The ergonomic design makes it very easy for you to type, and it has a ton of ports that you can connect to the laptop with.

It has a pretty solid battery life, and it’s very easy to set up with all the apps you need on your Chromebook. All you need to do is go on the Google Play store and you’ll be able to download all of the apps that you want.

So, the C433 is a well designed laptop with a long lasting aluminium chassis. It provides another budget Chromebook alternative to the more expensive options that are out there.

Verdict: Undoubtedly one of the best Chromebooks on the market, this is Google’s best offering to the laptop world. 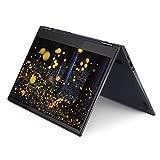 The majority of Chromebooks out there are released with convenience in mind, with most of them being less than 14 inches in size. If you’d like a Chromebook with a larger screen, then a good option is this Lenovo C630. It’s one of Lenovo’s less popular laptops, but as far as Chromebooks go, it’s a pretty good device.

What’s impressive about this device? Well, it’s more than just a laptop, it’s a 2-in-1 device as well. This means that you can actually flip the screen back on the laptop, all the way to a 360 rotation.

Then, you can use the laptop as a tablet, with its full HD touchscreen. You can also set the device up in “tent mode”, which is great if you want to balance it at an angle and watch a movie.

Although the specs of this laptop aren’t high end (an i3 processor isn’t great), it works well with the Chrome OS, and you don’t need any more power than this. It has minimal storage. but it’s very easy to set the device up with all your online apps, and you can easily save any files to Google Drive if you need to.

This is one of the best convertible laptops out there in my opinion. If you want a fast Chromebook that you can also use as a tablet, with a responsive touchscreen, then this is a great option.

Very well priced, even for a Chromebook
Can easily be switched into tablet mode.
Strong display with a high resolution

Verdict: For those searching for a 2-in-1 Chromebook, this is a great choice.

You don’t have to spend a lot of money on a Chromebook to get yourself a decent laptop. The Spin series from Acer is one of their cheapest yet, and for those looking for a daily laptop for casual use, then it might be worth opting for this model as opposed to the other more expensive options.

Like the C630, you can also flip this laptop into a tablet too. These 2-in-1 laptops have become increasingly popular in recent years, largely due to the increased use of tablets like iPads.

They’re great for browsing, and this model includes a Stylus pen with the device, meaning you can use with on the touchscreen to draw, write or do anything you need to. The touchscreen, though responsive, is made with Gorilla Glass. So, you can be sure that it isn’t going to break any time soon.

It also has a strong and durable aluminium chassis, and it’s also quote an attractive laptop too. Whilst it doesn’t have a great deal of power, it should be more than enough for most people out there. So, for a fairly cheap and well designed laptop, this is a great budget alternative to the rest of the laptops that I’ve mentioned here.

Build quality could be improved
Can get noisy under intensive use

Verdict: Though not the best Chromebook, it definitely offers excellent value for money.

How are Chromebooks different to Windows laptops?

Chromebooks are different to Windows laptops because they run on a completely different operating system, the Chrome OS (like Macbooks run on the Mac OS). The Chrome OS is a simpler operating system, and whilst the layout is quite similar, you won’t have as wider access to as many different programs as you do with Windows. Aside from this, they’re actually fairly similar to one another.

What is the most popular Chromebook?

There are many different Chromebooks that have sold well across the world, but in recent years the Google Pixelbook Go is one of the most popular options. Although it’s pretty expensive, it has all the functionality that most people could need from a laptop.

Why do Chromebooks expire?

One of the biggest criticisms of Chromebooks is that they come with an expiration date – this is when Google will stop giving you access to auto updates with your Chromebook. As of 2020, Google is giving 8 years of auto updates, which is more than the lifespan of most laptops anyway.

How much RAM do I need in a Chromebook?

You can get away with only having 4GBs of RAM in a Chromebook; this should be powerful enough for most people. If you want a better experience, then you can opt for a Chromebook with 8GB of RAM instead. 4GB of RAM will be okay for the near future, but long term, you’ll likely be wanting more than this.

What should I look for when buying a Chromebook?

Generally when you’re looking to buy a Chromebook, you look for the same things that you’d like to find in a normal Windows laptop. Enough RAM, a good processor and a good quality display are some of the first things to look for in any Chromebook. You can also consider looking for a 2-in-1 Chromebook if you want something you can use as a tablet too.

All in all, a Chromebook can be a great choice for those that want a simplified surfing experience. Whilst you won’t get all of the compatibility that a Windows laptop offers, many people don’t actually need it, and find that a Chromebook can be the better option.

For the best Chromebooks, you’re actually going to be paying a similar price to a base model premium Windows or Mac device. However, they can hold their own as they have a long battery life, plenty of power and above all, they’re usually really easy to use.