When you’re looking to build your own projector setup, then there are many different pieces of equipment you’re going to need. One of these is definitely a good projector screen. But, none of them are going to be quite as important as the projector itself, which is going to dictate the quality of your viewing overall.

This is especially true if you’re going to be projecting images during the daytime. Why? Well, the majority of projectors out there are designed to be used during the evening, or ideally even at night time. Most projectors don’t have the brightness to be used in the daylight.

And finding a model that is capable of projecting a bright enough image to be seen in daylight isn’t that easy. You can simply look at the lumens of your projector, but there is a bit more to it than this. Still, most projectors aren’t made for daylight viewing.

However, there are some options out there that will work well during the daytime. But, you need to know which models to look for. So, here are some of the best daylight projectors that you can use for films and presentations all day long. 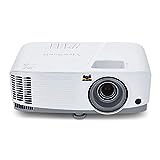 If you’re looking for a strong projector that can be as easily used for boardroom meetings as it can for watching films at home, then I’d advise that you check out the ViewSonic PA503W. It’s a very bright projector, and partnering it with the right screen can give you an awesome viewing experience.

This model has a reasonable contrast ratio of 22,000:1, which should be good enough to produce some good blacks whilst still giving you some vibrant colours. It also uses SuperColour technology, which helps to accentuate the colours even more. It has 5 different colour modes you can use too, each designed for different circumstances.

If you’re looking for a budget option, then you can order this projector with SVGA resolution, which is basic TV standards. But, you can also get it with upgraded WXGA specs too, which is an increased resolution and will overall provide a much better viewing experience (WXGA is 800p).

Bear in mind that if you do opt for this projector, then you’re going to need to order a mini HDMI cable too, as this is what it uses to connect to other devices. But overall, if you’re looking for a great viewing experience in both evening and daylight, then this is a perfect option.

This is one of the brightest projectors available for its price.
It is very simply designed, and its white colour will blend in easily with your room.
The SuperEco mode is very useful if you want to minimize your energy usage.

It has a fair contrast ratio, but some may feel it could be higher to improve definition.
The in-built speaker is fine, but you’ll want an extra speaker for better performance.

Verdict: Overall, this is one of the best projectors for daylight viewing. It is a good choice both for the office, but also for casually watching movies too.

Not everyone is looking to project a 100 inch image. If you need something with more than this, then a long throw projector is what you’re looking for. And if you’re looking for a great long throw projector, then the EB-X41 is one of the best options out there. It can project an image up to 300 inches, making it perfect for movies but also for presentations in large rooms too.

It has a brightness of 3600 lumens, which makes it suitable as a daylight projector. You’ll need to use it with a grey screen for the best results, as typically this colour works better during the daytime than just a standard white projector screen.

Although it’s a long throw projector and quite a powerful device, this is all wrapped up in quite a small package. It only weighs around 3kg, so you can easily move the projector around if you need to. Whilst it’s not a fully portable projector, it’s light enough that’s it’s not a chore to move it.

One of the better things about this projector is that it comes with an extensive 2 year warranty, which should help you out if you have any issues. So, if you’re looking for a good daylight projector that’s simple to set up, and works with wifi, then the Epson EB-X41 is not a bad choice.

It has excellent colour accuracy, which is very important for a good projector.
Getting the right set up with this projector is straightforward with easy keystone correction.
You can get this projector completely set up within just a few minutes.

As a long throw projector, it is best used with a very large display, which will be too big for some.
This is another projector with just an average contrast ratio.

Verdict: For those looking for something reliable that will last a long time, this Epson EB-X41 is definitely going to be a perfect fit.

Another good option if you’re going to be using your projector in a room or area with a lot of ambient light is the ViewSonic PA503S. It’s the base model of the PA503S I’ve already mentioned, just with a lower resolution.

This model is at the lower end of what you can look to spend on a good quality projector that will work as well in the daytime as it does at night. For the money, it’s actually quite impressive, and the 10 watt sound system definitely stands out.

Although this model is brighter than most other projectors out there, it still has a fairly long lamp life and you won’t need to change the projector lamp bulb for many years. It has both an Eco Mode but also a Super Eco Mode, which can be used when you’re using the projector in darker conditions.

With the PA503S, you also have an inbuilt timer which you can use to turn the projector off after a certain period of time. This can help with prolonging the lamp life of the device itself, but it can also be a good way to ensure that it doesn’t overheat after being left on all night!

This projector has the ability to reproduce colours very well, and with the high level of brightness you’re definitely going to get a vibrant image projection. It’s another pretty great option for anyone looking to get a quality daylight projector.

It has a high amount of lumens for a bright display.
The timer can definitely come in handy to send the projector to sleep.
This projector has a very long lifespan, so you won’t need to worry about replacing any bulbs for a while.

Verdict: If there’s one thing that stands out about this projector is that it offers excellent value for money.

You could also look at option, which is great for those looking for a projector to use during the daytime. The Epson EF-100B is a well finished device, with a lot of good things going for it.

One of the better aspects of this projector is the 5 watt speaker that it uses, which is definitely one of the better speakers you’ll find in any projector available. It’s made to a very high standard, and is capable of producing some great sounds.

As well as the speaker of this device, I’m also pretty impressed with the build quality too. It’s encased in fake leather and has a metallic trim, and it’s pretty compact too so you can take it with you anywhere you need to.

The only consideration with this model is the price, which is pretty high. However if you’re not fussed about the price, then the Epson EF-100B is definitely a contender to add to your shortlist.

If you’re looking for something portable, this is going to be the perfect choice.
The user navigation of this projector is pretty good.
You can easily use this projector with a Now TV or Amazon firestick.

The resolution that this projector offers isn’t the highest considering its cost.
The price may put some people off opting for this projector.

Verdict: This is another one of the best projectors, capable of producing a good quality image on your display.

Do projectors work outside in daylight?

Yes! You can get projectors that work outside in the daylight, despite what some people may tell you. Sure, the visibility might not be as clear as if you were projecting an image in pitch black, but it will still be a lot better than if you were trying to watch a TV outside. You will need a projector with a higher lumen count though.

Essentially, the 3000 lumens mark is around the area you want to be looking when you’re trying to find a projector that works well in the daylight. It’s the right level so it’s not too bright to be used in the dark, but it’s also bright enough to be seen in the daytime too.

How many lumens do you need for an outdoor projector?

How many lumens do you need to project in daylight?

There is no strict limit for how many lumens a projector must have to be seen clearly in daylight. It depends on many different things, including the type of projector that you’re using. That being said, as a general rule you’re going to need a projector with at least 2500 lumens for it to be seen in the daylight. Though personally, I prefer to opt for a projector with 3000+ lumens.

How do I get my projector to work outside?

If you’re trying to get your projector to work outside, then of course the main thing you’re going to need is a bright enough projector. But, you’ll also want to take some other things into account. You can also get a high contrast grey screen for your projector, which will help to improve its visibility in daylight.

There are many different outdoor projectors that you can use in the daylight, but making sure that you get one bright enough is of the most importance. If you don’t do this, then you’re never going to be able to use it in the daytime.

Whilst going for a high resolution is fine, if your projector isn’t bright enough, you’re not going to be able to appreciate the increase in pixels. When it comes to the best daylight projectors, the more limens of brightness you have, the better.

But with any of the projectors recommended here, you should be absolutely fine watching films, TV and whatever else you want to do in the daytime. As long as you have a bright light source and a reasonable image quality, then you should be good to go.

Is projector paint worth it?

What is contrast ratio in projectors?