If you want a good laptop for web development, then you’ll probably hear a lot of programmers say that it doesn’t matter. Whilst it’s true that you can code on pretty much any laptop, there are some that are better options than others.

This can be a combination of a higher quality laptop with more power, or even a device with an ergonomic keyboard making it easier for you to type. Either way, there’s definitely things that you can look out for which will make it much easier for you to code.

Generally, mid-sized 15 inch laptops are good for web development. So, let’s take a look at some of the best models out there you can choose. 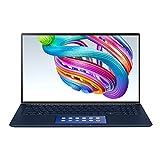 The ASUS ZenBook UX534 is one of the best designed laptops released in recent years. If you’re looking for a well priced laptop for programming and web development, then I think you’ll struggle to find many better options than this laptop.

This laptop uses the Intel i7-8565U processor, which is one of the most commonly used processors with laptops nowadays. It has 4 cores and 8 threads, which should be perfectly fine for tasks like programming and web development. It also has 512GB of storage, which is nice to have too.

With a NVIDIA GeForce MX150 graphics card in the laptop too, this allows to laptop to power some strong visuals. The display is fully HD and has IPS technology too – this IPS tech makes the laptop easy to view from any angle, as well as letting it produce some bright colours too.

The most noticeable thing about this laptop is the screenpad, which is built into the touchpad of the laptop. This, combined with everything else that I’ve mentioned, makes this laptop a pretty good choice.

Very responsive laptop when using it.
Good graphics card for producing images.
Battery life is above average and should last you a full day.

Can get fan noise when using larger programs.
Display isn’t of the very highest quality.

Verdict: If you’re looking for value, then this is one of the best laptops for web development on the market.

Whilst not everyone is a fan of Dell laptops, they’re are generally thought of as some of the best quality laptops out there on the market. This is true for their premium line, the Dell XPS, anyway.

This laptop comes with 16GB of RAM, which is increased from 8GB of RAM. If you’re looking to future proof your laptop so it’s still going to be responsive in 5 years time, then a 16GB is an essential purchase.

It also comes with a 8th Gen quad-core Intel processor, which has a max turbo frequency of 4.60GHz. It also has 512GB SSD, which should be sufficient for anything you need to save to your laptop.

All of this is packed into a pretty small laptop – it’s actually described by Dell as the smallest laptop of its size. This is partially due to the narrow bezel display, which means that there’s minimal space at the sides of the screen.

It only weighs around 2.7lbs, so it’s also a very portable laptop as well, perfect for taking to lectures if you’re studying computer science. So, if you’re looking for a laptop that can be used for the next 5 years or even longer than this, then the Dell XPS is a pretty solid choice.

Good high resolution display is beautiful to look at.
Design of the laptop itself is excellent.
Comes with an Intel core i7 processor.

Critics often say that it is overpriced.
Battery life is okay but not great. 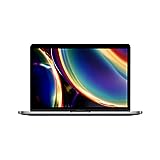 When you’re looking at the best laptop for programming, you’ll need to decide which operating system you want to use. Whilst some like Windows, many programmers prefer to use a Mac instead. You should decide which OS you want to end up using and stick to it.

The new release of the Macbook Pro is undoubtedly impressive, and even critics can admit that it’s one of the best built laptops out there. The overall quality of the Macbook Pro is strong, and the layout the laptop is good too, with the responsive Magic keyboard that Mac’s are known for working well with its touchpad.

The Pro is well known for having a good quality display to match the internal hardware used inside its aluminium chassis. The base model of this laptop comes with 256GB of SSD storage which is upgradeable. If you’re looking for a premium laptop, then it doesn’t get better than the Macbook Pro.

Whilst this laptop isn’t the most powerful out there, it still has 8GB of RAM and it now comes with the new improved M1 processor chip. First released in the Macbook Air, this 8-core CPU is a big improvement on the old Intel Core i5 or even i3 processor that they used to come with.

This improvement is great news for web developers, as more cores means that the laptop can cope with more programs running at the same time. So, if you’d like to use the Mac OS more than Windows, then it’s a good idea to opt for the base model of the Macbook Pro.

Definitely one of the best when it comes to UX.
Good keyboard for fast typing.
The graphics on this laptop are second to none.

Limited to working on the Mac OS.
Can be really expensive with upgrades.

Verdict: You already know what you’re getting with a Macbook – a strong build quality and a pretty great laptop overall.

Whilst I’m a fan of the Macbook Air and the Macbook Pro, there’s no denying that they’re pretty expensive for the spec of laptop you’re actually getting. If you’re looking for better value for money, then I’d advise that you check out Huawei’s Matebook line, which has some of the best priced laptops out there for programmers.

If we look at the Matebook D 15, it’s around half the price of the base model of the Macbook Pro. But it has the same amount of RAM, a similar quad-core processor and the same amount if storage too.

Whilst the display isn’t as good in terms of quality, that’s really the only big difference between the two laptops. It does this by using cheaper parts overall (for example, Huawei often use AMD processors, which are cheaper than Intel processors).

As well as having all the necessities you could need of a laptop, it also has some nice additional features too. Having a fingerprint reader isn’t a must, but it’s nice to be able to log in quickly and easily. All of this is wrapped into a laptop that’s only 16mm wide, too.

This is one of the cheapest 8GB laptops available, and it offers great value for money for those looking for a decent value programming laptop.

Ideal for casual daily use and programming.
Base model comes with ample power and storage.
Provides really good value for money.

No touchscreen with the UK version.
Camera for this laptop is hidden beneath a key (strange).

Verdict: Another one of my favourite budget laptops on the market, the Matebook series definitely impresses.

Although you might not have thought it, some of the best laptops for programming are actually gaming laptops. This tends to be because they have a high spec, which is amazing for gaming, but it’s also good for other activities too.

Whilst you don’t need a super powerful laptop for web development, it can come in handy to have something well built. This laptop has a responsive keyboard, so when you’re spending long evenings typing, is definitely going to be needed.

As well as this, the laptop itself is quite powerful. With an i7 processor the driving force behind 16GB of RAM, it should be able to cope with anything you throw at it pretty easily. You also have a whole TB of storage space where you can easily store all of your files and programs.

Whilst web design or programming isn’t this laptop’s main use, it can also be used pretty easily for this activity. The retina display definitely makes it pretty easy on the eye for long hours at your desk.

The overall design of the laptop is great, and the long battery life lends itself well to any web developer looking for a laptop.

Doesn’t come with any user guide or setup information.
Trackpad could be improved to be more responsive.

Verdict: This might be a little overkill for our needs, but it’s still a good choice if you’re after something reliable.

What kind of computer do I need for Web development?

If you’re worried about choosing the right computer or laptop for web development, then don’t get too caught up on this. As long as your device has an adequate amount of power and a working keyboard, then any kind of laptop is going to be fine.

Is Windows good for web development?

Whilst you might think that Windows would be the best operating system to use, most people will agree that it doesn’t really matter which operating system your laptop uses when you’re getting started. More important is that you just get started, as a lot of what you need to learn will be OS neutral. Some people prefer Macbooks, mainly because of their high quality, but also because they are based on Unix. Another commonly used OS is Linux, which is also based on Unix – a lot of developer tools are set up on Unix. But often you can get a more powerful laptop for cheaper than a Macbook, which is a reason to opt for Windows instead.

Is Python better on Mac or Windows?

If you’re wondering which operating system Python runs better on, then I’d have to say that it runs better on the Mac OS in my opinion. But, this kind of question is not really necessary with programming, as I know people who prefer doing this on Windows (and many more who prefer Linux over everything).

How much RAM do I need for Web development?

There is no specific requirement for the amount of RAM that you need for web development. At the moment, an 8GB laptop should be more than enough for your development work. Making sure you have a well built laptop is as important as the actual internal components.

Which processor is best for programming?

In an ideal world, you’ll get a processor that has 8 cores for web development. Why? Well, a lot of software out there can use up to 8 cores, so this will give you the best performance. This is in no way compulsory however, and most mid range processors will work just fine.

Overall, purchasing a laptop and getting started as soon as possible is the best thing you can do. It be probably be more of an advantage than taking ages to decide which laptop to opt for, or which operating system you want your laptop to be on.

You can get started with programming on pretty much any laptop out there, so it’s important that you just pick a model and get started. As long as you have a moderately powerful processor and enough RAM, that’s all you really need in a laptop.

How to get Netflix on your TV