A mini projector can be the perfect way to socialise with your friendly and family, but they can also be used in office work settings too. There are a lot of different options out these to choose from, and it can be difficult to know which mini projector is best.

Whilst most projectors are designed with the idea that they’re used in dark, dimly lit rooms, you can also find brighter projectors that are suited to light conditions.

However, they are typically more expensive due to the increased power, and will likely be heavier too. So, let’s look at a few of the best portable projectors that you can purchase.

For many people looking to watch movies and play video games in a dark room, you don’t need a particularly expensive projector. This fairly cheap Elephas projector should do the trick, and will be what the majority of people are looking for.

This projector has a lot of different connection methods, which make it good for working with different devices. You can connect to it via HDMI, VGA or even just with a USB stick or micro SD card too.

It is quite heavy for a portable projector, and it’s not quite the kind of “pocket” projector you might be looking for. It comes complete with a functioning remote control which can allow you to adjust the volume, screen brightness and more.

One thing I will say about this portable projector is that you have to completely ignore the stated lumens. This isn’t the actual brightness in reality, and it’s a marketing ploy to make the projector look more powerful and brighter than it actually is.

The truth is that when you’re looking for something that is less than £100, then you’re not going to be able to buy a projector of a high quality. The best portable projectors start at a few hundred pounds minimum, and run up into the thousands very easily.

However, this is still a perfectly good option for those looking for a simple mini projector to watch films on. It’s very low cost at less than £100, and for many people, it will fit the bill perfectly.

Barely any fan noise whatsoever.
Has a long lamp life which should last for years.
Very cheap in price, making it the perfect entry level projector.

Doesn’t come with a case to carry it around in.
Isn’t going to match high quality models.

Verdict: No, it isn’t of the highest quality. But for many people, this will be exactly what you’re looking for. A cheap and easy way to watch movies with the family!

The Anker Nebula Capsule is probably the most well known mini projector on the market. One of its standout features is the connectivity, with you being able to connect to it wirelessly in many different ways. This includes, Airplay, Miracast and Bluetooth if you want too.

Though there are newer alternatives to this projector like the Anker Nebula Capsule ii, I still think the original version provides the best value. With better models released, it also means that you can often find the original capsule at a cheaper price.

One of the main things that stands out about this projector is the compact design. Weighing less than half a kilo, this makes it easy for you to take with you anywhere. The built-in speakers are of a decent enough quality as well, and they’re definitely loud enough to deliver sound over a short distance.

It also has around a 4 hour battery life, which should be sufficient for one or even two full movies. All in all, if you’re looking for a well made portable projector, the Anker Nebula Capsule is an amazing choice.

Android operating system is simple to use.
Can use with Bluetooth or Airplay.
Sound is above average for such a small device.

Would prefer an auto focus option as opposed to manual.
Doesn’t deal with any ambient light at all.

Verdict: A long time favourite for anyone searching for a small projector that delivers a solid picture. 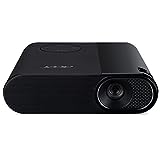 If you’re looking for a good projector to watch movies on, then this Acer C200 is going to be a great option. It’s not the cheapest projector out there, but it definitely gives you a good quality picture for its price. It is definitely a step up on the first projector on this list.

This projector has 200 ANSI lumens, which we know is accurate because of its ANSI regulation name. This is actually not very bright for a projector at all, which is why I recommend it as a cinema projector, or for gaming. You’re going to need to use it in a dark room, and it’s not a good option if you’re looking to use it in a light room.

It has a long battery life, and it can easily last 4+ hours without having to recharge it. It’s also very light at only 350g, making it a fairly light projector easy to fit into your backpack. You’re going to want to use a simple HDMI cable with this model when you’re at home, and if you want to connect to it wirelessly, you’ll need to purchase an adapter.

So, it makes for the perfect portable projector, and it’s definitely a safe choice for those looking for a good way to watch films. I think it provides excellent value for money overall.

Low contrast ratio could be improved.
No other connectivity options outside of HDMI.

Verdict: For a step up on the budget portable projectors out there, this Acer C200 is ideal. 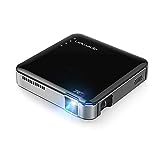 Although Apeman have typically been thought of as a cheaper Chinese brand, this isn’t the case with their projectors, which are made to a high standard. If you’re looking for a truly pocket sized projector, then this would be an awesome choice.

It weighs just 213 grams, making it one of the lightest projectors out there. It is also only 10cmx10cm in size as well, which means that you can sneak it into your backpack with ease.

This projector can still manage to produce a 1080p image on your display, and its native resolution is supported by a good contrast ratio as well. Together, they result in a strong overall picture quality.

The only thing to mention is that this projector has minimal lumens, meaning that it’s only really suited to working in dark environments. So if you’re looking for a projector to use for gaming, movies and other entertainment, then have a look at this Apeman portable projector.

It’s small enough to fit into the palm of your hand.
Manages to produce a really bright image.
The built in speaker is above average quality.

There’s no Bluetooth connectivity for you to use.
A short throw projector can only produce a small image.

Verdict: This Apeman projector produce a high definition image making it perfect for movie night. But bear in mind that it only manages to produce a small screen size.

This is not specifically a mini projector, but I thought I’d add it in at the end just as an example of a projector that truly has the lumens it represents.

Many cheap portable projectors on the market state that their projector has 3000, 4000 or 5000+ lumens. However, this isn’t really the case, at least not measured by the ANSI standards that most people use.

This Epson EB-U05 is an example of a projector that does actually have this power (it’s 3400 lumens), however you can see that it’s much heavier, and it’s a whole lot more expensive.

This kind of projector is going to be more suited to presentations and usage throughout the day. It is a long throw projector, meaning in works best at a distance and projecting very large images. A projector like this can be a good choice if you’re looking for something that can do everything.

Very bright lamp portrays excellent colour accuracy.
Ideal if you’re looking for a long throw projector.
A good warranty to back the projector up.

Not very portable and quite heavy at 3kg.
Fairly expensive for the average consumer.

Verdict: Though not strictly a good choice if you’re looking for a portable mini projector, this option is one of the brightest out there for its price.

DLP or LCD – Which is better for Mini Projectors?

If you’re trying to decide between the two most popular display types, then it really depends on what you’re looking for. LCD projectors tend to be cheaper, and they have the ability to give more light (lumens) for a much cheaper cost. LCD projectors tend to use less power, and they’re typically less noisy than DLP projectors. However, you can still get a crisp picture with a DLP, but you will need to be using it in a dark room, as they’re typically less bright than LCD’s. You can buy DLP projectors with greater lumens, but they can cost a lot more than the comparative LCD.

Do lumens matter in a mini projector?

When you’re buying a projector, typically you’ll want to check the amount of lumens the projector has. However, if you’re buying a relatively cheap projector, then sometimes the lumens stated are not going to be accurate. Many sellers use “lumens” as a selling point. So, if you see ANSI lumens, then this is likely to be accurate. But if you see a £50 projector that says it has 5000 lumens, then this is unlikely to be true. Take it with a pinch of salt and check out the reviews to get more information about its brightness.

Are small projectors any good?

The good news is that small projectors can be just as good as larger projectors. As technology has advanced, we’ve been able to fit enough power into smaller, portable projectors as we can into larger models. So although they might be a little more expensive, they perform much better than they have in the past.

Can you watch Netflix on a mini projector?

Yes, you should have any problems watching Netflix through your portable projector. Just make sure that you have the app installed and you have the right connectivity in place for your projector, and you’re good to go. This is the same for any other streaming apps out there too.

How can I connect to a mini projector?

The way that you connect to your mini projector will depend on what capabilities it has. Most portable projectors will allow you to connect to them via VGA or HDMI port, which is great if you want to link your laptop up to it. However, you can also connect to them with storage devices, like a USB stick. So, it might be best for you to download your films onto a storage device and connect to it that way, as this helps to increase portability.

In conclusion, there are many mini projectors out there that can be used with the lights off. But if you want something that you can use at work or in a brighter environment, then you’ll likely need to pay more for this.

You’ll need a portable projector with more lumens, which will be more expensive. If you’re not using your projector in a darkened room, then it’ll have more light sources to compete with. And for this, a more powerful and brighter projector is needed.