May 13, 2021 by Nathan | *As an Amazon Associate, we earn from qualifying purchases

There’s no doubting that virtual reality has been a massive talking point within technology for the past 5 years. Much of the debate is around the best VR headset is, and depending on who you ask, you’re likely to get different opinions on the matter.

Plus, it’ll also depend on what you’re looking for from your virtual reality experience. Motion tracking, room scale VR and external sensors are just a few of the things you’ll want to think about if you’re looking for the best VR headsets.

And whilst there isn’t a great amount of options available when you’re looking to purchase a VR headset, it’s important to know what’s available out there before making your own decision. So, let’s look at the best virtual reality headsets you can currently buy on the market.

In short, when it comes to standalone headsets, it’s pretty difficult to beat the Oculus Quest at the moment. It’s completely wireless, and it’s a tethered headset, meaning it’s not reliant on any other software or devices (like a gaming console or computer).

It is a little short on games though, and it’s the same case with the Oculus Rift. For a good game library, you’re probably better off sticking with console and going for the PSVR, and PS5 users will want to hang tight until the PSVR 2 is released. We’re also going to take a quick look at the Valve Index too. 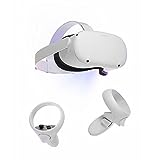 The Oculus Quest 2 was released towards the backend of 2020, and it’s been received well by users. Overall, it’s set a new standard when it comes to virtual reality headsets, and it’s definitely given the other VR brands something else to think about.

The main differences between this version is that it’s lighter than the previous version – this is pretty noticeable when you actually put the Quest 2 on. As well as being lighter, it’s also slightly smaller as well, which is another plus.

If we’re looking at the spec improvements of the Quest 2, then the main things we can point out are a newer version of Android. Along with this comes a 2GB of RAM update from 4GB to 6GB, and a double up of the storage from 128GB to 256GB. It seems like they really did listen to feedback about the first generation.

Despite being smaller in dimension and weight, the Quest 2 is actually much more powerful than the previous Quest. It’s easier for you to put the Quest 2 on with its newer headstrap build, and it’s more closed around the eyes. This helps to keep the light out, which is essential if you’re trying to immerse yourself somewhere else.

The Quest remains a wireless VR headset, which for many people is an essential part to really immersing yourself into the virtual reality experience. It can be a little difficult to really get into things if you’re worried about tripping over wires all of the time. But, the PSVR doesn’t have those problems.

The downside of this is that whilst you get the benefits of a completely wireless experience, you do have to think about battery life. It’s a little below par when we compare it to other devices that we’re using on a regular basis, though it’s a little unfair to compare it to most other gaming peripherals.

So, in conclusion this is probably the best virtual reality headset for the majority of folks out there. It definitely isn’t cheap, but it’s definitely worth its cost in terms of usability and performance.

If you’re looking for a virtual reality headset to use with a console, then the PSVR is going to be your best option. It much not have proven to be as well received as Sony would have liked, but it’s still one of the top options if you want a VR headset you can use with your Playstation.

Comparing the Playstation VR to other gaming accessories makes it very expensive. But if we compare it to other virtual reality headsets, then we can clearly see that it’s actually relatively affordable for those looking to dabble in virtual reality.

And whilst it’s far from perfect, it’s a very good place to start for most people. There’s minimal latency with the PSVR, and you’re best off using it with a proper TV or monitor capable of providing a fast refresh rate (120Hz). The current model will be compatible with both the PS4 and the PS5 moving forward as well.

There are many worthwhile games that you’ll want to look for if you’re going to go for the PSVR, with none more highly anticipated than Hitman 3. Highly regarded by those older folks that are used to playing the original games and younger players who have played the remastered versions, this is just one of the games that are lined up with Playstation VR.

So all in all, it’s the top option out there if you’re looking for a VR headset that you can use with your gaming console. Whilst it might not be the perfect finished article as of yet, it still provides a good gaming experience. There’s a reason why it’s still the best selling VR headset.

Whilst we like the Oculus Rift S a lot, it’s a good time to mention that Oculus are actually discontinuing the Rift line for the foreseeable future. This doesn’t mean that they’ll stop providing support for the Rift series, but they’re not selling any more as of some point in Spring of 2021. This is due to the company trying to focus on headsets that aren’t required to use another device (PC).

But if you’re looking for a PC virtual headset, then at present the Oculus Rift S is the best option out there. Since the first Rift was released back in 2016, Oculus have been at the pinnacle of everything within virtual reality gaming. The Rift S was released in 2019, replacing the original version of the Rift.

There have been some changes to the Rift from the original version – switching headphones out for speakers, a much more comfortable headband and an improved tracking system as well. The good thing about the Rift S is that it uses 2nd gen touch controllers, which are better than those used with the original.

It’s also very simple to set this headset up and get it ready for use. One reason some people opt for the Playstation VR is because they assume it’s easier to set up. In fact, the Oculus headsets are as easy to set up themselves, and you can be using it within 5 minutes or so.

In conclusion, the Rift S is not a bad option for those looking for a slightly cheaper PC virtual reality headset. If you can afford it then I’d definitely say to opt for the Quest 2, but this isn’t a bad alternative to the more expensive headset.

If we’re looking at the headset alone, then the Valve Index would probably be at the top of the list when it comes to VR headsets. It has some amazing features and things going for it that other models don’t.

Above everything else, the Valve Index provides one of the best virtual reality experiences overall. It’s a pretty seamless experience using the headset, which definitely has its motion tracking on point. It also has a really good field of view, making it one of the best VR headsets.

Another thing that it’s definitely got right is its audio. It’s one of the best sounding headsets out there, and with many of the first generation releases from other brands not being great in terms of sound, it seems like Valve has learned from their mistakes.

But saying this, there are a few pitfalls with the Valve Index. The main one is its catalogue of games. When you’re fighting against Oculus and Playstation who both have big catalogues, it’s hard to recommend when it doesn’t have a whole lot of different things to do in there.

As well as this, there’s also the price that needs to be considered too – and the fact you need a decent GPU and computer to use it properly. So for now, the Valve Index is good, but not great. We’ll wait and see what Valve produce next before spending all our cash on the Index, though.

Do you need a PC for VR?

The good thing about the Oculus Quest 2 is that unlike the Rift S, which needs to be connected to a PC, you don’t need another device to run it on. This is one of the reasons why it’s considered by many to be the best virtual reality headset out there. With other virtual reality headsets, you’d need a fairly high end gaming PC to use run it.

How much is a good VR setup?

With more and more headsets being released, the overall price of a good VR setup is actually getting cheaper and cheaper. It really depends if you count the PC/console too – if you already have those, then it shouldn’t cost you more than £500 to get everything you need for your own VR setup. But if you’re looking for one that you can use with your PC, then it could cost you substantially more than this.

Why is VR still so expensive?

For the time being, VR in general will continue to be a moderately expensive hobby for those of us who are interested in it. It’s not as expensive as it was when the first models were released in 2016, but it remains fairly expensive for the consumer, and it likely will do in the near future, even if it gains more mainstream acceptance. In a few decades time, we may see prices drop with more and more usage.

If you use your VR headset a lot, then you might end up suffering from eye strain. Taking breaks can help to stop this from happening. Aside from this, VR headsets are considered to be safe for use. So, you don’t need to worry too much if you’re planning to use your headset for hours on end.

Why has VR not taken off?

This really depends on who you ask. VR may be doing pretty well for itself, or it may not have taken of at all – it’s really subjective. The next few years will be pivotal for VR at least for gaming use, and we’ll see how the Quest 2 does over the coming years.

Overall, there are different virtual reality headsets out there depending on what exactly it is that you’re looking for. For those looking for something to use with a console, then the PSVR is going to be a safe bet. It’s unlikely Playstation will release anything new for at least 18 months.

But for those looking for a VR headset that manages to do things on it’s own, then there’s still no better option than the Oculus Quest 2 when you consider it’s price. It has a great catalogue for you to choose from, and it’s definitely one of the most exciting experiences you can have with virtual reality.

What to do when your Chromecast keeps disconnecting