If you’re looking to improve the internet connection in your home, then one of the best things you can do is to ensure you have a good wireless router. A router is essentially your gateway to the internet, so it’s important that you have the right one in place. It can be difficult to know which wireless router would be best for you, as there are many different options out there.

However, it is possible to differentiate between the routers available, and some are just clearly better than others. So, lets take a look at some of the best wireless routers that you can currently buy. 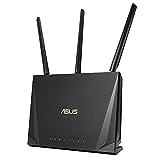 If you’re looking for the best compromise of price and performance of a router, then I’d advise that you check out this ASUS wireless router.

This router supports wifi speeds of up to 2400Mbps, which is more than enough megabits for the majority of people. The good thing about ASUS routers is that they use MIMO technology. This essentially helps to keep your devices separate from each other, and will help to eliminate any effect of another device using a lot of bandwidth. So if you’re in a shared household, then this router is going to be a good fit.

It also uses something called AI radar, which helps to ensure that your signal is strong. If you have kids, then you can easily set the parental controls on this wifi router as well. You can either restrict somethings activity entirely, or just minimize their time on adult sites. For those who aren’t particularly tech savvy, this router is very easy to set up too.

So overall, this is definitely one of the best choices of router if you’re located in the UK. 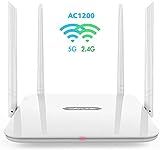 If you’re on a tighter budget, then you can look at other cheaper brands. This WAVLINK AC1200 model is a cheap price, but it still works as well as any other router.

The only problem with lower cost routers is that typically they aren’t made to the same high standard. However, this isn’t the case with this model, and you’ll be able to easily connect to this device with as many devices as necessary. The four antennae on top of this router help give it the capabilities for long distance connection, so if you’re in a 3 story house, you’re not going to have any problems with this model.

This router is good for people who aren’r really bothered about which router they get; they just want something reliable that’s going to get the job done. Obviously, by opting for a low cost router you’re going to compromise on the mbps capabilities of your router. But overall, this is best cheap wireless router currently available.

The eero is Amazon’s answer to the wireless router, and it’s fair to say that it’s been a massive success. The key to this is it’s simplicity, essentially just offers a solid home connection that’s easy to connect to your home devices.

If you already use Alexa, then obviously this would be a good option to match with it. Plus, unlike many other routers which companies abandon them, with Amazon you’re going to get continuous updates to help improve the device.

Another good thing about the eero is that you can easily control the settings for it via your phone app. The app also makes it very to check the usage of your internet and which devices are using a lot of bandwidth.

If you’re wondering how a mesh router differs to a regular router, then here’s how. A Mesh Wi-Fi router has many different points of access. This difference can give the Mesh Wi-Fi the ability to offer better speed and more reliability.

If you like the idea of the Amazon eero but just feel like you would need higher mbps capability, then you could consider going for the eero Pro. The pro version supports speeds up to 1 gigabit per second, which is much faster than the standard eero.

The reason why you might need a better router like this one is if you’re going to connect a large amount of devices to it. This model can actually handle up to 50 different devices at once, which should be more than enough for most households and even some offices. It also has some comprehensive filtering controls too, so if you want the ability to restrict some people from the internet, this is a good choice.

All in all, this router is definitely more expensive that the rest, but it’s the better option if you have a large household of people who might have more than 10 or 20 devices.

What is the purpose of a wireless router?

Should I get a wired connection instead?

It’s no secret that a wired connection is going to be faster that using a wireless one. However, the majority of wireless routers actually have the ability for you to connect to them with a cable as well. So, you can have the best of both worlds with a wireless router. But, if you went for a wired router, then obviously you’re going to have issues connecting to the internet of several devices at once, and you don’t really want to be restricted by a cable if you’re just browsing the internet on your phone!

What is a Dual Band Router?

You’ll likely see that the majority of routers available will say that they’re “dual band” routers, but most of us don’t really know what this means. Essentially it is just that these routers have the ability to transmit data at both a 2.4GHz frequency and a 5.0GHz channel. This reduces the possibility of any interference, and the 5.0GHz is typically much cleaner too. So with more bandwidth, you’ll be able to get a better connection on your devices.

What should I consider when buying a router?

When you’re going to be purchasing a router for your home, there are a couple of things that you’re going to want to take into account. Firstly, the most important thing is the performance of the router. How many mbps can it support? How good is the coverage? Is it a dual band router, meaning it can work over two channels and provide more bandwidth? These are all questions you’ll want to be asking yourself. You also want to consider how much security the router offers, and whether it can keep you secure from hackers.

Is a WiFi Router the same as a Wireless Router?

You’ll see the term wireless router and wifi router used interchangeable all over the internet. But yes, don’t worry – they mean the same thing!

A good connection is an essential for the majority of people nowadays, especially if you may be working from home more, which it seems like the majority of us will be doing! However, you don’t need to go out and spend a fortune on a wireless router, as there are many options available that are quite affordable. So, just make sure you do your research before you buy one and you can ensure that the internet in your home stays solid.

My Router Keeps Losing Internet Connection – How to Fix