October 13, 2021 by Jon | *As an Amazon Associate, we earn from qualifying purchases

Bose speakers tend to come under some harsh criticism sometimes. This is mainly from people who work in the audio industry, or have a keen interest at least. Though they’re not bad speakers, they’re often said to be overpriced.

However, one area where I think most people agree that Bose do really well in is the portable Bluetooth speaker market. Whilst they may not be as high quality as Klipsch or as user friendly as Sonos in the general speaker department, when it comes to portability, it’s very difficult to beat Bose speakers.

Enter the Bose Soundlink Mini. One of the more popular Bluetooth speakers on the market, it has had relative success in recent years. So much so, that it received a new generation – the Soundlink Mini 2. And then after that, we’ve had the Special Edition released of the Soundlink ii (2) as well.

But how does the newer Soundlink Mini improve on the original? That’s what I’ll be looking at, and comparing the newer generation of this speaker to the older one.

The main differences between the two speakers are;

These are the key differences, and in all honesty, there isn’t too much between the two. 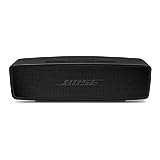 The Bose Soundlink Mini 2 is probably best known for its sound quality, which is surprisingly good for the small size of a completely wireless speaker. But, the original Soundlink Mini 2 was also discontinued all the way back in 2018 now.

At the time, the Soundlink Revolve was Bose’s main Bluetooth speaker they were trying to push. So, they intended to completely abandon the Mini line for a while, as they focussed on other wireless speakers instead. This was fine, until they saw the demand for the return of the Mini series.

This prompted Bose to release their Special Edition version of the Soundlink Mini 2. They released this speaker towards the end of 2019, and it’s proven to be fairly popular.

There have only been a few tweaks to the speaker itself. The main one is that it comes with a faster charging time and a slightly longer battery life of 12 hours in comparison to the original’s 10 hour battery level. You also have more options when making calls whilst your phone is connected to the speaker.

But on the downside, it now doesn’t come with a charging cradle, which will only matter to some. You can easily just plug the speaker in using its USB-C cable anyways, so a cradle isn’t exactly necessary to use it.

So aside from everything that I’ve mentioned, the Special Edition Mini 2 is the same as the original Bose Soundlink Mini ii in every other way, including in its design.

This is one of the lighter speakers available, which is no surprise considering its size. It weighs around 700 grams, making it very portable and easy to carry around with you. It has definitely got a good build quality, and it will last you a long time before you need to think about replacing it.

When we’re looking at the dimensions of the two speakers, they’re also identical in terms of size. So, this is something that Bose decided not to change with the Soundlink, even though they’ve updated some other aspects of the speaker.

Unlike many other portable speakers out there, the Soundlink Mini 2 wasn’t designed to be waterproof. So although you can take it with you anywhere pretty easily, you’ll need to watch out that it doesn’t get wet. This means that it’s not a great speaker to choose if you want something to take to the beach with you.

The Bose Soundlink Mini ii has an improved multifunction button in comparison to the original, but aside from this they’re very similar to one another. Though there’s not much of a difference, there are some key improvements, with the battery being a key one.

The battery life of the Soundlink Mini II is about average when you compare it to other similar speakers. Whereas other options may have 16 or even up to 20 hours of battery life, the Mini II only manages to last for 12 hours. Not poor by any means, but not excellent either. You can charge the device with a USB-C cable.

You can easily turn this speaker on with the large power button, and it is simple to connect to it as well.

As expected, the way for you to connect to this speaker is via a stable Bluetooth connection. However, you also have an aux input port on the device as well, which gives you another way to connect the two.

If you want to, it’s very simple for you to connect your device to your smart home speakers as well. It’s straightforward if you want to link the Soundlink Mini II up with your Amazon Alexa, and you can easily add the voice assistant feature if you want to use Siri with your speaker too.

You can use the volume controls and Bluetooth button on the top of the speaker to set it up quickly and easily. And once you do, you’ll be able to enjoy the sound quality it has to offer.

This is a fairly basic speaker, so it’s not filled with cool new features for you to try out. But what it does do is give you is a whole lot of power in a relatively small speaker design.

The speaker is especially good with delivering bass, which is typically something that portable speakers are particularly weak at doing. You won’t need to worry about playing deeper music and it struggling, because it copes very well, although the clarity could be improved.

Overall, the sound is definitely one of the best aspects of this speaker, though it may not compare to more expensive options.

The battery life is acceptable, but could be improved.
The older charging cradle is preferable to no cradle.
Big and bulky design might not suit some.

Overall, first of all it’s clear to say that it is pretty obvious the Soundlink Mini 2 is a better updated version of the original in a few different ways. So if you have the choice between them, then the 2nd Generation is definitely a better choice.

It manages to deliver a good sound quality and a fairly big sound, especially when you consider its small size. It truly is a portable speaker that you can pack up and take with you wherever you need to go.

But how does it fare against the rest of the speaker market? Well, it’s fair to say that it’s one of the better options if you’re looking for a portable speaker for your home or in the garden. Its design isn’t as durable and hardy as some other speakers on the market, but if you’re going to take good care of it, it’s a good option.

Are Bose speakers worth the money?