It can be really difficult to find a good quality photo printer, but one of the most recommended models is the Canon Pixma TS3350. The Pixma series is pretty highly regarded in the printer industry anyway, but this model is particularly cheap, making it very attractive to those looking for a bargain.

Most printers tend to have a long lifespan, and this is how we can tell if they’re a good investment or not. If a printer is still popular 5 years after its release, then you know it’s good. The TS3350 was only released back in 2019, so we haven’t really had enough time to truly analyse it as of yet.

But going off what we know now, how good is this printer? Well, let’s break down the good and bad things about this model. 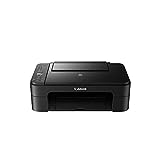 If we cut right to the chase, this printer will suit those who aren’t looking to spend much on a printer. It’s not going to do anything fancy, but in terms of finding a basic printer for a good price, then this is one of the first models that I’d look at purchasing.

However although this printer is basic and slow, it actually prints to a very high quality. It has a 4800×1200 dpi, which is what the majority of Pixma models offer. This allows you to print on normal plain paper, but it’s also perfect for printing images on photo paper.

So if you’re looking for a printer that can print photos comfortable, this is a good choice. Obviously if print speed is important to you, you’re likely going to want to look elsewhere.

The best way for you to typically use this printer is with the Canon print app, which works well and is usually very responsive. You can also print via Apple Airprint too if you have a Macbook or an iPhone. As well as this, you can also use Google Cloud Print if that’s what you prefer.

Another good thing about this printer is that the ink costs are generally better than other similar brands like HP and Epson. Although the costs of an inkjet printer will build up over time, they aren’t as bad with this model.

But like all printers, it’s not all good. Like most cheaper printers, it isn’t capable of double sided printing, plus it does have a smaller 60 sheet paper tray which isn’t great for large quantities of documents. So, let’s look at the positive of the TS3350, and then the negatives of this printer too.

If you’re looking for a printer at a great price, then this is definitely a cost effective solution.
Something that stands out with all Pixma printers is that they tend to have an amazing print quality when it comes to photos.
Compared to Epson, the printing costs of this model are pretty fair.

I’m probably being a bit picky, but the shell of the TS 3350 is pretty cheap and made of plastic. It doesn’t really matter at the end of the day as it gets the job done, but it’s not the most attractive printer to look at.

The good news is that this model has wifi printing, which means that you can connect to it very easily to print anything that you need to.

However, the bad news is that if you want to print with this model via a USB connection, then it’s quite slow. So, it favours wifi printing, which is probably good for the modern user anyway.

Another area where this Canon Pixma isn’t great is in its printing speeds. When you’re printing black and white, it can print at a rate of 8 pages per minute.

If it’s in colour, then it’s as slow as 4 pages per minute. So, from this we can easily see that this printer is intended for casual use, and not for those who will be printing often.

The plastic shell that is used with the printer is quite cheap, and not as well made as other brands.
If you use the USB connection, then it doesn’t tend to connect very well and can be unreliable.
The slow and sluggish printing speeds that this printer offers are definitely going to be too slow for those that print a lot.

Common Questions about the Canon Pixma

Can this Canon Pixma printer scan?

Yes, the Pixma TS3350 does have the ability to scan as well as print. It has an inbuilt flatbed scanner, so you’ll be able to get any documents from physical onto your computer too.

Does the Canon Pixma TS3350 have wifi?

Yes, you can connect to this printer with both wifi and via USB. However, the connection via wifi is typically faster than connecting via USB, so keep this in mind. You can choose between Airprint, Google Cloud Print and by simply using the Canon app too.

Do refill cartridges work with the Pixma?

Yes, refill cartridges can be one of the best ways for you to keep the costs of your printer down. You should consider them if you want to reduce your overall printing costs, assuming you print on a regular basis.

Is this the best Canon Pixma printer?

It’s hard to say that this is the definitive best Canon Pixma printer, but it’s certainly a pretty decent one. There are other Pixma models out there to consider too, like the PIXMA iX6850, which is one of the best A3 printers around.

In conclusion, I’m pretty happy to recommend this printer to those who only print occasionally, like once a week or so. It’s not powerful enough or fast enough to be used as a workhorse every day, so if you’re looking for that kind of printer, you will need to look elsewhere.

So, it does lack when it comes print speeds. But for casual use in your home, this isn’t a bad printer, especially if you can find a good deal for it in a sale. The strong wi-fi is reliable, and for the price, it’s definitely hard to find anything that can compare.