March 16, 2021 by Jon | *As an Amazon Associate, we earn from qualifying purchases

If you’re looking for a new laptop, then the likelihood is that you’re looking at models like both the Dell XPS 15 and the Surface Book 3. They’re two well designed laptops, and they both offer pretty different experiences to one another.

This means that depending on what you’re looking for, one of them is far more likely to suit your needs than the other. The Surface Book is said to be one of the most attractive laptops out there, whilst the Dell XPS series has been highly regarded for more than a decade.

But what are the key differences between these laptops, and which one would be best for you? Well, let’s look at some of the similarities between the two, and then how you can tell them apart.

In terms of the main similarities between them, they’re both pretty expensive in comparison to the rest of the laptop market. Of all the models out there, they’re two of the most popular 15 inch laptops you can buy.

They are both also probably best known for their build quality and high resolution display, which is one of the characteristics that allows them to command this high price tag.

But this is only scratching the surface when it comes to the analysis of these two different laptop models. So, let’s look at them both a little bit closer to find out more about them. 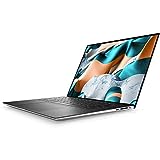 The Dell XPS 15 9500 is one of the most popular laptops on the market, and it’s well known that this series is pretty well respected. It’s often referred to as one of the best Dell laptops. It’s a newer similar variation of the XPS 15 7590.

As you’d expect, it uses some of the best parts available, which is one of the reasons why it’s pretty expensive. For starters, it can come fitted with an Intel Core i7-10750H CPU, but you can upgrade to a i9-9980HK processor at its highest spec. This is an 8 core, 16 thread processor that is good enough for well, pretty much anything.

At the minimum spec it comes with an i7 processor, which should speak volumes about who this laptop is designed with in mind. A 10th Gen Intel Core processor is still in the upper echelons of what’s out there, so for 95% of people, this will be more than enough.

It also comes with 16GB of RAM, and a good amount of storage as well. As well as this, it also has 16 GB DDR4-SDRAM, which is great for the graphics of the laptop. It is undoubtedly an impressive laptop from all different aspects.

But, the most impressive part of this laptop is undoubtedly the display, with the 4K resolution being a major selling point. It is available in 1080p too, but you’ll want to opt for 4K UHD if you want the best possible laptop that will last you a while.

And even further, combining this with a well laid out touchpad and a responsive keyboard do make this laptop difficult to beat.

The XPS keyboards have always been thought of as pretty decent, but with the XPS 15 9500, the size has been increased by around 10%. This makes it great for typists, especially when combined with its shallow depth.

Tough it’s not a gaming laptop, you could also consider the XPS 17 9700 if you’re looking for a larger display. It should be enough to play most games on, though it’s actually capable of much more than that.

The 4K display that this laptop has is one of the best around, and it’s perfect for those who want the very best in terms of quality.
It’s not only the design of the display that’s impressive, but the entire chassis, keyboard and touchpad are top tier.
This laptop only comes with premium parts, so you know it’s going to last for a long time.

Both of these laptops are expensive, with Dell XPS having a reputation for being amongst the most expensive laptops in the market (and some say overpriced, too).
For a high spec laptop, the fan sound is noticeable, and it probably shouldn’t be when you’re paying this much.
As you might expect with this model, it doesn’t have enough connective ports, likely due to its slim design trying to minimize this.

The Surface Book 3 is one of the most recently released laptops from Microsoft, and they claim it to be one of their best too. And if the past Surface Books are anything to go from, it should be pretty hard to beat.

They’re undoubtedly one of the top options for people looking for a 2-in-1 laptop, and the screen is easily detachable from the keyboard and touchpad. You can buy it with both a 13.5 inch and 15 inch display, and it really depends on what you prefer.

The touchscreen is one of the most responsive touchscreens around, which is why this laptop comes highly recommended to designers and those looking to make use of the Microsoft Stylus.

Bear in mind that it doesn’t come with any extra accessories, and they can cost a fair bit themselves. A Surface pen can cost as much as £100, so you’ll likely need to budget for this as well if you’re trying to stay within a certain price range.

The base model comes with an Intel Core i5 processor and 8GB of RAM, with 256GB of storage space for you to make use of. This is about average and what’s expected of a premium laptop nowadays.

It’s a significant improvement on the Surface Book 2, with a newer processor, a better quality graphics card and a stronger battery life. Having the 1660Ti NVIDIA GPU definitely makes a massive difference to the graphics on display.

From a negative perspective, it is a bit more expensive, so it’s not a good option for those on a tight budget. Because of its sleek design, it can also be viewed as a little bit fragile in comparison to more robust laptops too.

For those looking for something sleek and lightweight, there’s no better option out there than the Surface Book 3.
The Surface Book 3 has one of the best battery lives of any laptop out there, with it having the ability to last 2 days of full use pretty easily.
Although I wouldn’t advise this laptop if you’re looking for something purely for gaming, it still has the capability to run games pretty well.

The base model for the Surface Book 3 costs a lot, and in many cases, it might be worth upgrading to a better spec laptop to ensure it lasts 5 years or more without becoming outdated.
There’s no Thunderbolt 3 connection with the Surface Book, which might frustrate some people.
The accessories for the Surface Book are ludicrously expensive. But then, is that any worse than Dell? Probably not.

All in all, this is definitely one of the harder decisions to make between the two laptops, as they’re both pretty impressive. Out of the two, I think that I’d opt for the Microsoft Surface Book 3, purely due to its flexibility. Aside from this, they’re very similar in terms of quality and performance.

Even if we were to compare the Surface Book 3 to a more similar model, like the Dell 13 7390 (which is also a convertible 2-in-1 laptop), then I’d be more inclined to go with the Surface Book.

The new model has an amazing battery life, and it’s an awesome choice for anyone who will make the most of its touchscreen – it can also double up as a gaming laptop, too.

How to improve the picture quality on your laptop