Epson vs HP Printers – Is the Ecotank really better?

Two of the biggest printer brands out there are HP and Epson. And whilst they’re both very popular, sometimes those looking for a printer can struggle to decide between them.

Deciding which to opt for can be tough, and much of your decision should really come down to what you need. For example, the best printer for high quality text printing isn’t necessarily going to be able to print colour photos with great detail. And, one that works well with glossy photo paper may not print well onto plain paper.

Whilst both of these brands offer good printers and bad printers, there are some general opinions that we can form about them both. So, let’s look at the brands as a whole first, and then look closer into some of the models of printer that they both offer.

The difference between these two brands is that whilst HP printers are initially cheaper than Epson printers, they are more costly over the months and years that you use the printer. Whilst Epson printers cost more initially, you tend to save money on printing costs over the long term.

Bear in mind that you’re not going to save money overnight by opting for an Epson printer – it can take 3-5 years before you realise how much money you could have saved. Many Epson models come with over a years worth of ink supplied, so you need to factor this into your purchase as well.

And, there are many people who wouldn’t even benefit from an Epson Ecotank printer. Why? Well, they’ll just never print enough to even warrant having the extra initial cost on the first place. Let’s look at these two brands in a little more detail and compare them to one another.

Epson’s most popular series of printers is their Ecotank model, which was released more than 5 years ago now. The intention of this is that you don’t actually use ink cartridges like you would with the majority of printers out there.

Instead, in the front of the printer are tanks, or Ecotanks. This means that you don’t have to insert a cartridge into the printer at all, and instead you get bottles of ink that you can pour into the tanks to refill them.

Generally, Ecotank printers come with a ton of ink to get your started anyway, so if you don’t print regularly, this might last you a good while before you have to get more supplies. 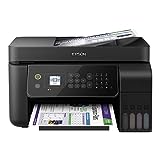 Epson EcoTank ET-4700 A4 Print/Scan/Copy/Fax Wi-Fi Printer, Black
Save on Ink: Save 90% on average ink costs thanks to the ultra-high-capacity ink tank; Connectivity: Print via Wi-Fi, even from mobile devices

When you’re talking about high end Epson printers, then one of the first models to think of is the EcoTank ET-4700. Although it has a pretty high price tag, there’s a few reasons why this printer isn’t actually as expensive as you think.

The main reason being is that you’d actually end up saving a ton on printing costs, but only if you print frequently. This model comes with at least a years supply of ink, and when you do want to refill, it actually isn’t that expensive either.

In comparison to other Epson and HP printers, which are cheap initially but have high printing costs, it definitely isn’t a bad choice considering the ET-4700.

The Epson XP range is pretty well known. Originally designed for being made for offices, it’s now developed into much more than that. With the addition of the Epson XP Home series, there’s now a lot of different models to choose from.

The Expression XP-4100 is known for being one of the better Epson models that’s been released in recent years. It’s priced pretty reasonably, and it makes the perfect addition if you’re looking for a printer for your home.

It’s easy to connect to this printer via wifi, and it’s an all-rounder that has an integrated scanner and copier too. It’s designed to be quite compact, and should fit easily anywhere in your home.

The only downside of this printer? Well, it definitely prints at a slow rate, with only 5 pages per minute if you want to print in colour. But if you’re looking for something reasonably priced, then this is definitely one of the top options out there.

There are various different HP models to look at when it comes to getting a new printer. For those looking for a low priced printer, then the Envy 6020 provides excellent value for its cheap price. It’s an all-in-one printer, and it prints to a high standard with text and black ink.

Another reason why I like HP printers is that they’re very easy to set up with the HP Smart app, and you can easily use the app to print and scan too. It’s easy to use cloud storage, like Google Drive, to find and print out any of your documents.

HP don’t just deal in home printers, and they also have a line of office printers too, with one of their best models being the Officejet Pro 8028. It prints at a reasonable speed, and you can also use it to fax, copy and scan too.

It’s very easy to link up to the printer with a Windows or Mac device, and although it’s an office printer, it’s not too big either. Although it looks like a laser printer, it’s actually an inkjet printer and you can easily sign up to HP’s Instant Ink service to save some cash too.

Cost of the Printer

Of course, there are cheap and expensive options offered by both of these brands. However, whilst HP do tend to offer many low cost printers for those looking to save cash, Epson tend to stick to more expensive printers and office printers.

So by nature, an office printer will tend to cost more, making Epson the more expensive of the two brands. This isn’t to say that all HP printers are cheap, and when they’re compared to each other directly, there’s not a great deal between the two.

They’re two of the most expensive brands on the market, but also two of the best quality too. So when it comes to costs, you really need to look at each individual model.

If you’re wondering about the text print quality of each brand, then it’s very difficult to tell the difference between them. I’ve used both HP and Epson printers that have had really great text quality. However, I’ve seen printers from both brands that don’t have the best text quality, too.

It’s really impossible to split the two by looking at their text printing quality. You need to look at the individual reviews of each printer to find out more about this.

Both Epson and HP have produced some pretty great photo printers over the years. HP definitely have more of a selection when it comes to printers specifically for printing photos, so I’d have to choose them out of these two brands.

However, if I was going to buy a photo printer, then I’d probably opt for Canon above both HP and Epson. The Canon Pixma series has produced some awesome printers that are made specifically for printing out photos.

An Epson Ecotank printer will have significantly lower printing costs over 5 years than a standard HP printer, especially with the difference in initial ink given (Ecotanks come with tons of ink, whilst HP printers come with barely any in comparison).

But, the truth is that the Ecotank is very similar in performance to the HP Smart Tank printer, which is one of the best ink tank printers. So, they both have a similar cost per page when it comes to printing.

If you take an average of the printing speeds of both HP and Epson, then across the board Epson have the better speeds out of the two. However, this is a little unfair, as Epson have more high grade models than HP. And, many of HP’s cheaper models aren’t created with speed in mind.

In general, the printing speed of your printer will depend on whether you’re printing in colour or in black and white. Either way, overall this will be better to analyse at a printer level instead of a brand level.

Overall, as a general rule then I’d stick with HP printers if I was a casual, occasional printer who was looking for a cheap printer. However, if I was printing on a regular basis and at a decent volume, then I’d be more inclined to check out what printers Epson are offering that might suit my needs more.

Epson are a good choice if you’re looking for laser printers. But for inkjet printers, HP still has my vote, as they tend to have a good print speed and you don’t have to pay a ton for each ink cartridge.

2 thoughts on “Epson vs HP Printers – Is the Ecotank really better?”