Gigaset vs Panasonic Cordless Phones – Which is best?

September 20, 2021 by Nathan | *As an Amazon Associate, we earn from qualifying purchases

If you’re trying to decide which cordless phone brand to go with, then you’ve probably come across both Gigaset and Panasonic. They’re two of the most popular phone companies of recent times, and it can be really difficult to pick between the two.

Fortunately, whilst they are both good brands, there are some reasons to opt for one over the other. Of course, this is depending on what you’re looking for. So, let’s start a comparison of Gigaset and Panasonic to see which of them is the better choice.

Whilst both companies are known for their tech products, they’re both quite different. Panasonic are a much larger company, as they focus their attention on a lot of other areas, like televisions and sound system.

Whereas with Gigaset, the majority of what they sell is cordless phones and smartphones, so their focus is solely on this. They also sell a small selection of smart home products, but their real focus is in the cordless phone market. 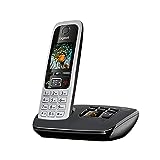 Gigaset was essentially launched as a subsidiary of Siemens, and they’re based in Munich, Germany. They were originally known by a different name, but changed to Gigaset more than a decade ago now. Being based in Germany is good, as it is known for its strong engineering background.

One of the best things about Gigaset is that they have a good variety of phones with a wide range of different abilities. Most of their phones have answering machines, and you can even find a good cordless phone that has VoIP integration built into it.

Many Gigaset models also come with in-built room monitoring. At an advanced level, you can use it as a baby monitor if you need too. \

The basic option will automatically call your saved number upon hearing an alarm or smoke detector go off. Having this can give you a little more peace of mind when you’re not at home.

Gigaset phones are also very easy to navigate, which is of importance if you’re trying to find a phone for a senior or someone who is hard of hearing. Many Gigaset models are actually designed with the elderly in mind, as they have larger buttons that your average phone.

Typically, Gigaset phones come with a 2 year warranty, which can give peace of mind to those who are concerned with how their phone will hold up. Their customer service is friendly and attentive, so if you do have any problems with your phone, then this should be easily fixed.

The main drawback of opting for a Gigaset handset is that they don’t tend to make cheap, budget friendly options. Most of their products have more advanced features, that some people might not really need.

So if you’re on a tight budget and you need to buy a set of phones, then it might be better to look at another brand.

Of course, Panasonic as a company doesn’t really introduction, as they’re a household name in the UK.

The main selling point for Panasonic phones is that they offer some great deals, especially if you’re looking for more than one handset. Typically you can find offers for 3 or 4 Panasonic handset for the same price that you can pick up a dual handset deal from Gigaset.

Another good thing about Panasonic cordless phones is that most of them have an eco mode built into them. This helps them to last longer on their batteries, resulting in using less energy.

The biggest flaw that I’ve found in Panasonic phones is that they don’t have the lifespan compared to a more premium phone like Gigaset. Generally, you get what you pay with technology products, and it’s no different with cordless phones.

By opting for a cheap Panasonic phone, you might end up shopping for a new one within a few years.

However, this isn’t always the case and Panasonic do actually offer some more expensive options too. If you want something that’s going to last, then it will probably pay to invest that little bit more.

What to Look for in a Cordless Phone

If you’re thinking about purchasing a cordless phone, then it’s important to know exactly what to look for. Here are some of the things you’ll want to consider before purchasing one.

The reality is that both of these brands have cordless phone options that are good choices. They both have a good variety to offer, and different models should have all the features that you need; nuisance call blocking, long answerphone recording times and a long battery life are just some of the things to look out for.

However, if we look at the track record of each company and compare them, then most people tend to prefer Gigaset handsets in comparison to Panasonic handsets. That’s why I featured several Gigaset handsets in my list of cordless phones that I think provide good value for money.

How to activate caller ID on home phones