There are more and more 2-in-1 (convertible) laptops arriving onto the market this year, with a massive increase in demand for them over the past few years.

One of the most popular models amongst these convertible laptops is the HP Envy x360, which seems to provide good value for money for those looking for something reasonably priced.

Another similar laptop that you’ll find pretty highly regarded is the ASUS Zenbook Flip (UX463), which is a slimline convertible laptop with a decent amount of power. But out of these two laptops, which one would be the better choice? Well, let’s take a look at them in closer detail.

The HP Envy x360 has consistently been one of the best flip laptops available over the laptop few years. It is excellent value most of all, and it meets the criteria to what most people want from a 2-in-1 laptop. The x360 series in general has been one of HP’s most successful in recent years.

In comparison to this, the Zenbook Flip is a very similar laptop, and it is usually within a very similar price bracket too. What impresses me most about this laptop is that it is very well built, and it is likely to last you a long time.

It also stands out for its facial recognition feature, which isn’t common in mid-range laptops. We’re going to take a look at both of these models closer to compare the two.

It’s only fair that we compare the same specs with both of these laptops, so this model of HP Envy comes with an AMD Ryzen 5 processor, 8GB of RAM and 256GB of SSD space. This is about the standard amount that most good laptops come with nowadays, and it’s probably going to be more than enough for most people.

This laptop uses a AMD Ryzen 5-4500U, which has 6 cores and 6 threads. If we compare this to the Zenbook flip which only has 4 cores, this is an immediate tick in favour of the Envy x360. This processor also has base clocking speeds of 2.3GHz, in comparison to the 1.6GHz of the Intel processor.

One of the best aspects of the Envy x360 is definitely its display, which is on par with more expensive devices. It has a vibrant screen with good contrast ratio, which is necessary for any 2-in-1 laptop, as it’s likely you’re going to spend a lot of time watching videos. The display also uses IPS technology, which means that it’s good to view from all angles.

So, the display and the hardware of the device are good, but it’s also wrapped up into a sleek package too. This isn’t typical of the Envy range, which is usually pretty bulky.

But, it’s undoubtedly one of the best quality laptops that this range has released in a while. You can check out more HP laptops with this HP guide.

I prefer the hardware of the Envy x360, with a good quality AMD Ryzen 5 processor being the driving force behind this laptop.
Both laptops have pretty beautiful screens, but I still think the x360 is a little more vibrant.
The HD display is made possible by the AMD Radeon Vega Graphics card, which is definitely a plus for this laptop.

Although there isn’t much of a difference between the two, the design of the Zenbook flip is a little better in my opinion.
The x360 doesn’t have the additional extras like the Zenbook Flip; facial recognition would be nice to have, but it’s not a must.
The touchpad of this model isn’t the best out there, and it can feel a bit cramped. 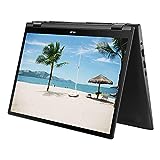 It uses a fairly recent processor in the i5-10210U, which was only released towards the end of 2019. This quadcore processor supports 8 threads, and has a clock speed of up to 4.20GHz, with a base frequency of 1.6GHz. However if we compare this to the AMD processor, it’s not as powerful.

These two laptops are very similar in their design, with the Zenbook having a more finished edge – it’s made to military standards, and is more durable than most other laptops out there.

ASUS are becoming pretty well known for their screenpad technology, which is integrated into the UX463. Essentially this is just a navigation menu that’s built into your touchpad, but it can make it much easier to find apps and programs you want to use.

One thing that the Zenbook has that the x360 and most other laptops don’t have is the ability to use the touchpad as a numberpad. This is easy to do, and can make it much easier to enter numbers into your laptop.

This laptop includes a sleeve and a Stylus pen with it, so it will be ready to go if you’re looking for a laptop for art. Overall, it’s a very close competitor to the x360, and there isn’t too much between them.

The Zenbook flip is a very well designed laptop, and this shows in its high quality chassis.
It has an Ergolift hinge on the laptop, which makes it a little smoother that the x360. This is good for those who are going to use it in tablet mode often.
The Zenbook flip has facial recognition, which allows you to log in with just a glance.

Overall, the internals of both of these laptops are very similar to one another. But, I’ll give the Envy x360 the better of the two if we’re talking about internals.
The battery life of the UX463 isn’t as good in comparison to the x360.
This laptop isn’t as good at multi-tasking as the HP model, which is another area that it’s weaker

All in all, I’ll give the overall preference to the HP Envy x360, which has been one of my favourite models of laptop released in recent years. It’s an impressive, fairly priced laptop that’s great for everything from casually browsing even through to drawing.

However, I wouldn’t write the Zenbook Flip off completely, as it’s a good laptop in it’s own right.