HP Omen vs Alienware – Which should you choose?

November 18, 2021 by Jon | *As an Amazon Associate, we earn from qualifying purchases

When you’re looking for a new gaming laptop, there are a few different brands out there for you to consider. One of the main ones will be Alienware, who are actually owned by Dell. They’re a trusted brand with a big name in the gaming industry.

However, these aren’t the only laptops out there for you to consider, and there are some other decent brands too. One of these is the Omen series by HP, who have released some pretty great laptops in the last few years.

But if you’re trying to decide, which should you go for between the two? Well, we’re going to look at both Alienware and HP Omen to see which is best.

In general, the HP Omen range tend to provide pretty great value for money. Though you will find HP critics out there overall, they’re a good alternative to more expensive brands like Alienware.

And as you’d probably expect, the branch was launched as a competitor to Dell’s purchase of Alienware all the way back in 2006. Both companies had thought about investing in the gaming industry for many years, but Dell was first to pull the trigger.

From there, HP actually bought Voodoo computers, which was a luxury brand with a gaming brand. Fast forward to 2013 and the Voodoo name was long gone, and they released their Omen line under the HP name.

One thing that the HP Omen range doesn’t have is a lot of variety, but they do still have some good laptop models out there. They tend to come with Intel Core i7 or i9 processors, and they also use Nvidia Geforce RTX graphics cards too.

The RTX is actually a little better than the standard Nvidia Geforce GTX range in some ways. The RTX range are designed to give a more realistic gaming experience, which is noticeable when you’re playing games like COD.

A good example of what their range has to offer is the HP Omen 17, which is one of the best cheap gaming laptops that you can find on the market. It’s significantly cheaper than pretty much any base Alienware model, and when you start to upgrade it, its value for money becomes even more apparent.

It’s filled with pretty much everything you could need from a gaming laptop – 16Gb of RAM, a 144Hz refresh rate and a good amount of storage space too. So whilst this is only one model that HP Omen offer (the other popular model is the HP Omen 15 inch), it’s a good basic gaming laptop that’s ideal for beginners.

The main advantage of opting for a HP Omen laptop as opposed to an Alienware or a MSI is that you can find them for a more reasonable price, so they’re better for beginners.
Although Alienware products might use higher quality parts, this doesn’t mean to say that HP Omen are bad, at all. They still use decent quality internals, and you can be sure that they’re made to a solid standard.
In general, the HP Omen models seem to get better and better with each year. This is definitely true with the HP Omen 17, which is a massive improvement on past models.

Although much of the attachment to Alienware is because they’re a gaming only brand, they do tend to be made to a higher standard than other brands, including HP’s Omen series.
If we’re talking about battery life, then typically HP Omens will have a lower battery life than Alienwares out there. Remember; they’re quite a bit cheaper on average too.
For the most part, the design is not as aesthetically attractive as an Alienware laptop. Whether the attractiveness of your laptop is a factor for you is really down to the individual.

Alienware are overall the more expensive of these two brands, and they’re well known for their high quality laptops. Although there are a lot of different options to choose from with Alienware, the majority of them are pretty expensive.

Launched back in 1996 and purchased by Dell ten years later, the brand have been the number 1 choice for serious gamers for a while now. Much of this is due to their design – plus they’re very easy to upgrade as well. And when it comes to gaming laptops, they’re likely to be the first brand most people look for.

The cheapest Alienware laptops tend to start at around the £1500 mark. Plus when you add in all the upgrades and extras you might want, you’re likely to be spending £2000 or more easily. 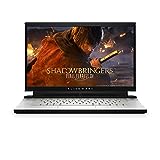 Although Alienware laptops are going to set you back a little more than other brands, they’re often worth the additional cost. A good example of this is the m15, which has been one of their bestsellers for years now. With the R2 version being released fairly recently, it’s one of the best options out there right now for gamers.

It has everything that you can need from a gaming laptop, and it’s beautiful design makes it stand out. So if you’re looking for a top of the range gaming laptop, then considering an Alienware is probably going to be a good idea.

The main advantage of an Alienware laptop is that it’s going to be made to a really high quality. This is the same for its design & chassis, and the internals of the laptop too.
For those that like customization, you’ll have a lot more choice with Alienware than with other brands. This means that if you want to put together your own laptop, then opting to go with Alienware is a good idea.
Unlike many other computer brands out there, Alienware actually have a pretty good customer service in comparison to the rest.

If you’re looking for a cheap laptop, then it’s not going to be an Alienware. Pretty much all of their laptops are pretty expensive, so there’s not going to be many bargains to find.
The cynic will say that Alienware are only expensive because of their brand name, and they’re actually not much better in quality than the other brands out there (not enough better to warrant the price difference, anyway).
If you want to use your Alienware for other things, then it isn’t necessarily adapted for this. For example, no Alienware laptops have SD slots. They’re made for gaming; and that’s it.

In conclusion, if you’re going to opt for a cheaper gaming laptop, then it’s definitely worth checking out the HP Omen series. They can prove to be the perfect entry level gaming laptop to get you started.

But if you’re looking for something with a little better quality and you have more cash to invest, then opting to go with Alienware is a wise idea. They have a great range of laptops which are ideal for more experienced gamers.

How can I sit comfortably in bed with my laptop?