December 21, 2020 by Jon | *As an Amazon Associate, we earn from qualifying purchases

There are lots of different choices out there when you’re trying to find the right printer for your needs. Nowadays, inktank printers are becoming more and more popular amongst users, with people being attracted to their low printing costs.

So, just how good is this printer and is it a competitor to Epson? Or should you stick with their models? Let’s look at it in a bit of a closer detail.

The Smart Tank 455 is a genuine competitor to the Ecotank series, as it rivals the Epson range in terms of both printing costs and quality too. The biggest obstacle for most people will be the price, which may exclude some who are looking for something more budget friendly.

Though it does have a high price, it comes with one or two years of ink, which attracts a lot of people to it. There’s a lot more to say about this printer – let’s look at it in more depth to find out more about it. 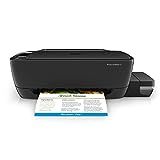 HP Smart Tank Wireless 455 All-in-One Printer, Up to 2 Years of Ink in the Box,White
Check Price at Amazon

The HP Smart Tank 455 is one of the mid-range models released by HP, with their intention of being one of the go-to brands when it comes to ink tank printers.

Whilst it’s still being sold in the UK, it has been discontinued in Australia, where it proved unsuccessful. If you still want an inktank printer, then check out our full inktank guide.

Overall, the quality of printing that the HP Smart Tank 455 produces is above average. Whilst it’s a very slow printer, it makes up for this in its overall quality and low printing costs. But, it prints well both of standard A4 paper but also on glossy paper, too.

The good thing is that with just one full ink cartridge tank, you can print more than 6,000 pages with black and 8,000 pages of colour, all at a good standard too.

The printer itself is designed to be fully compatible with Wifi, as well as other printing methods like via Apple Airprint too. Aside from wi-fi, you can also connect to this printer via cable.

Although the connectivity of the printer itself is supposedly extremely good, there does seem to be a lot of people online who have come across wifi connecting issues with this model. So, make sure you do your research before purchasing.

The main reason that you’ll want to consider a Smart Tank product is that they’re very, very good on ink prices. Therefore, you’re going to save a ton of cash on printing costs over the years that you own this product. It’s very easy to refill both coloured ink and black ink into the tanks provided.

With most cheaper printers, you can end up spending more on printing cartridges per year than you did on the printer itself. This is where models like the Smart Tank 455 come into play, as instead of using cartridges, they actually use refillable tanks instead.

The printer comes with full tanks when you order it, so unless you print an insane amount every day, then it should be more than enough to get you through your first year. And moving on from there, your printing costs will be significantly lower than if you went for a cartridge printer.

This is a well designed printer, with reducing ink costs as its core focus, and we can tell this from the start. Although printing costs are down, so are printing times, and it can take a long while to print, especially in colour.

It comes with 4 ink bottle, which should be enough to get you started. It has a 100 sheet input tray for you to insert your paper, and a 30 sheet output tray. Plus, it can produce 9 copies at once too.

As you’d expect, the main advantage of opting for this printer is that the printing costs are so much lower than the competition. if you print at a high volume, it’s worth checking out.
As well as being relatively cheap to print, it also prints to a pretty good standard too. You would expect this from a premium printer, though.
The software that HP use, like their HP smart app, is very easy for you to use and print with, making it great for those who wan to print via mobile.

This printer takes absolutely ages to print – it can get through 15 pages per minute in black which is fine, but coloured pages are more like 8 ppm, which is pretty slow.
As well as being a slow printer it’s also very slow at scanning too. So in short – don’t opt for this printer if you’re often in a rush to get stuff done!
Another area where they could improve this model is in the display screen, which could be a bit easier to navigate.

All in all, I do like the HP Smart Tank range and the 455 is not a bad printer by any means. However, I’m not sure that it does enough to take the crown off the EcoTank series, which probably still makes the better inktank printer out of the two brands.

If you’d like to stick with HP, then it might be worth checking this model out. Although expensive, it is undoubtedly one of the better printers when it comes to print quality. But keep in mind its lack of double sided printing, which may be a deal breaker for some people.

Why is my printer printing pink?