Kindle Paperwhite vs Voyage vs Oasis vs Kids: Models Compared

May 12, 2021 by Melissa | *As an Amazon Associate, we earn from qualifying purchases

When you’re looking to purchase an e-Reader, it can be pretty difficult to decide which model you should opt for. There are different brands out there to choose from, with the Amazon Kindle being the most well known and popular.

There have been different releases on the market over previous years, which includes the original Kindle, along with the Paperwhite, the Oasis and the Kindle Voyage too. And if you speak to owners of these Kindles, they’ll all probably tell you that their Kindle is pretty good.

But out of these different models of Kindle, which one of them is best? Well, we’re going to look at all of the different Kindle models available to work out which one is right for you.

Kindle Paperwhite vs Voyage vs Oasis vs Kids

Sometimes, it can be pretty hard to keep track of all of these models. This is because they don’t just release one generation – they tend to update them as they see fit, on average every 1-2 years.

To be fair to Amazon, the newer generations are typically good improvements on the previous models, and they add in new features that do make the Kindle itself a little better than before. For example, adding in the waterproof exterior to the Kindle Paperwhite and the new Kindle Oasis is something that pretty much everyone wanted.

There are a few features which may not be entirely necessary for your needs, like having a higher resolution display – most people don’t need that when reading books. Anyway, all of these models will be fully compatible with Kindle Unlimited. Let’s run through the different models of Kindle so you can know how they’re similar and what sets them apart from the others. 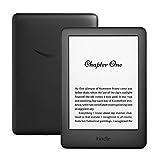 The original Kindle is the most updated model of eReader that Amazon has released. It’s been through several different minor changes over the years to improve the design, and it’s resulted in a powerful e-book reader. It’s the lowest cost option that Amazon currently offer.

In recent years it’s increased in power, been made significantly smaller whilst maintaining a fairly large display, and it has a front light now as well. This can definitely come in handy if you plan to read in the night time, or even in the late evenings when you’re relaxing.

Most people won’t need anything more than the standard Kindle. Sure, it only has 8GB of storage, but for the average person, this will be ample space to store all of your reading material. This amount of storage will be enough to save thousands of books.

If you’re an avid audiobook listener, then this is where the models with more storage come into play. You’ll likely want to look at a larger Kindle with more space, as typically audio files can be quite large. But if not, then 4GB will be enough for you.

Although it doesn’t have all the bells and whistles that some of the more expensive Kindle variations have, it’s good enough for the vast majority of people. It’s still the cheapest Kindle available, and for my money, it’s the best value out of the bunch as well.

For those that haven’t used an e-reader before, it’s a great example of what you can get for your money. Like the other models, it has a long battery life and it’s compatible with Audible. And on top of all this, it’s a good price too.

Overall Verdict: If I had to choose between all of these models for the first time, then I’d opt for the original. The other models are great, but they could be overkill unless you read on a daily basis.

For those that are looking for a step up in quality to the standard model, then you’ll want to look at the Kindle Paperwhite. It’s usually around double the price of the base model, and it’s improved in a few specific areas.

One of the main areas that the Paperwhite is improved is the ppi, or the pixels per inch. Quite simply, with an increased 300 ppi compared to the 167 of the standard model, there are a lot more pixels on the screen itself, which makes for a higher quality and more detail display.

This can make a difference primarily with the pictures in your e-reader. Even though e-ink devices aren’t particularly good as presenting pictures due to the lack of colour, it does make your reading experience a tiny bit better. The Kindle Paperwhite is slightly larger, both in height and width.

Another area where the Paperwhite is an improvement on the original is in its storage. You can get the standard Paperwhite which has 8GB of storage, or you could opt for the even larger 32GB model. This is only really going to be necessary if you’re going to be downloading audiobooks as well.

The Paperwhite comes in a nicer variety of colours, and it has a better front light than the standard Kindle. It’s slightly brighter, which does make a different when reading e-books for a sustained period of time.

Although very similar to the original, the Kindle Paperwhite does have a slightly better build quality as well. Oh, and it’s also waterproof too, which is another must have feature for those that plan to use the Kindle on their holidays.

Overall Verdict: For more ardent readers who want increased storage space and a better Kindle, but still like the 6 inch sized screen. 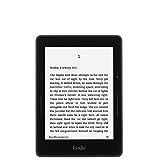 The Kindle Voyage was a pretty popular eReader by Amazon, but between the release of the Oasis and the Kindle Paperwhite, it fell somewhere between the cracks of the two.

It was discontinued back in 2018, and it doesn’t look like Amazon will be releasing any updated generations in the future (although never say never!). The Voyage never even got the chance to work with Audible, as Amazon never updated this model like they did with other Kindles.

It had pretty much all of the specs of the Kindle Oasis, though it was slightly smaller in size at 6 inches. One of the main drawbacks of the Voyage was the price tag, which was fairly expensive at the time for a Kindle of its size.

We’ll see if Amazon return to the Voyage in the future, but with the popularity of the Kindle Oasis, it’s pretty unlikely. There’s still potential talk of Amazon revisiting the Voyage in the coming years, with newer page buttons and an overall improved ebook reader. 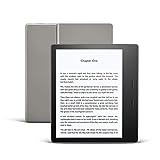 First released back in 2016, the Oasis has been through several upgrades since its launch. It was the first model to be made waterproof. You might think that this means water resistant more than waterproof, but it can stand being submerged in water.

However it’s not the only model to be waterproof now, as a lack of water resistance was a common complaint about Kindles until 2017/8. This was probably from folks dropping their Kindle into water whilst they visited the beach or swimming pool.

The main advantage of the Kindle Oasis is really the increase in size. For some, the extra inch of screen space may feel like a burden, but it’s actually well designed and only slightly heavier than the other Kindles on sale. Compared to the Paperwhite, it definitely feels better quality.

This is largely down to the aluminium chassis, which gives it more of a high-end feel. As well as this, it’s also quite a bit thinner than both the Paperwhite and the original, which is impressive and means that it only weighs around 12 grams more than the Paperwhite, even though the display is much larger.

The Oasis is the most expensive Kindle on the market, and for this reason, it’s probably only going to be appealing to ardent readers. For some, the standard Kindle or the Paperwhite would be a perfectly fine choice, but if you want the very best, then the Oasis is the right model for you.

Overall Verdict: The 7 inch screen does make it a little easier to read. It’s the definitely best Kindle overall, but it’s quite expensive, so will be suited to those who read on a regular basis. 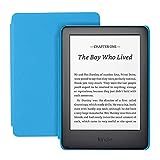 First announced and released in 2019, it’s a wonder it took so long for Amazon to produce a Kindle specifically made for kids. As one of the main demographics of readers, it’s important to give kids a way to read.

If your kids already have a Kindle at home and you’re wondering if you need the Kids version for them, then there’s probably no point. It’s basically just the standard Kindle model, though it comes with a coloured case to match (not worth paying more for).

The main thing to note about the Kindle Kids is that it’s made to work with Amazon’s Kids+, which is essentially like Prime Reading and has 1000+ kids books for your child to get started with.

It can be a good place to start for many, and it’s free for the first year (renewing at £1.99 per month after this). You can subscribe to this on any Kindle, though.

Comes with a free one year subscription to kids, £1.99 thereafter
Pretty much the standard Kindle with a colourful case
Typical books included in the kids subscription include Harry Potter

Overall Verdict: The Kindle Kids subscription might be worth trying for younger kids who are just getting into reading.

Even within the Kindle name, there are different options to choose from depending on what exactly it is you’re looking for. They’re all very similar to one another, and it can be tough to decide which one would be the best Kindle for you.

Overall, I think that for the majority of people out there, they’d actually be just fine with sticking to the standard Kindle from Amazon. It’s a good size, it has a front light on the newer generations and it has enough storage space to keep most people happy.

If you’re looking to go for something higher quality and waterproof, then the Paperwhite might appeal. It’s a step up in class in comparison to the original Kindle e-reader, and it can get mobile connectivity as well as wifi.

And for those looking for the very best, then the Kindle Oasis is the obvious choice, though it’s probably only going to appeal to regular readers. Though it does come with a higher price tag, the larger display size is definitely worth looking at if you read on a daily basis.

Hey! I'm Mel, I write the occasional article for Spacehop, amongst other things. I love meeting new people and chatting, so if you have any questions don't hesitate to ask.

What to do when your Chromecast keeps disconnecting