Kobo vs Kindle – Can the Clara match Amazon’s eReader?

April 23, 2021 by Jon | *As an Amazon Associate, we earn from qualifying purchases

When considering eReaders, there are two brands which outshine the rest of the competition by a significant margin. And depending on what you’re looking for, one of them may be a better option than the other.

Firstly, Kobo is a brand that specialises in eBooks, audiobooks and everything to do with reading books digitally (I mean, they’re named Kobo, an anagram of B-O-O-K, for a reason!).

However, they do have some stiff competition in the Amazon Kindle range of eReaders. Amazon have used their growth to expand into various different markets at will, and it wasn’t going to be long before they dominated in this area either.

So, they’re two established and well known brands with different eReader devices for you to take your pick from. Which one of them is the better option for most people? That’s what I’ll be looking into to find out.

There is not a great deal of difference between the design and build quality of the Kobo and Kindle brand. Generally, Kindle is a better choice if you’re in the UK or US due to their library and ease of use. If you’re based in Canada, you might want to opt for Kobo.

The eReaders themselves are pretty similar, although most people prefer the design of the Kindle. Kindle also has a more responsive touchscreen, and sometimes with a Kobo, you might encounter margin errors.

They both have a high end model and a mid-priced model, but Kobo hasn’t come down to anywhere near the Kindle original’s low price point. This is likely due to shipping and delivery, which is super easy for Amazon to afford.

So for a budget buy, the Kindle is definitely the best choice at an entry level. However, it’s worth noting that even the cheapest Kobo doesn’t have annoying ads within its platform, and you have to pay a little extra with Kindle to get rid of them.

If you’re curious about the range and selection of books both offer, then you may already know that Kindle doesn’t support ePub books. You can find these quite easily online, and then transfer them onto your Kobo straight away. To get these books found online onto your Kindle, you’d have to convert them into the MOBI format first.

Kobo books can be more expensive than books you’d find on the Kindle. However, they do offer a price match, meaning that if you do find the book cheaper on Kindle, then you can get it for the lower price.

Most people find that with the Amazon Unlimited subscription, you’ll have access to more than enough (1,000,000+) books to read. So if you’re looking for a subscription service, then opting to go with Kindle is probably better.

Now, let’s look at the models that Kobo have available right now, then talk a little bit more about Kindle.

With the first eReader from Kobo being released back in 2010, they’re a direct competitor to Kindle and they’re the closest to them in terms of sales. Although you might think that they’re a small company, they’re actually a subsidiary of the Japanese powerhouse Rakuten.

And whilst the two brands are competitors, there are a lot of similarities between them in terms of design. All of their eReaders are made with a similar 6, 7 or 8 inch screen, and they have a similar feel to them, as well as their appearance.

Like Kindle, Kobo have a range of different models that you can choose from. It can be pretty tough to know which of them is the best option, so let’s look through the entire Kobo selection.

The smallest and simplest model that kobo have released, the Nia is where most people will want to start. It packs 8GB of storage into a pretty small package, and a solid resolution and responsive display.

It’s currently their cheapest model available, but it’s still considerably more expensive than the lowest priced Kindle on the market. So for those looking to same money, then going with Kindle will be an easy choice in this regard.

Though it’s Kobo’s cheapest eReader, it is better in comparison to the standard Kindle. It has double the storage space, a better PPI and you won’t need to worry about ads at all.

The next step up from Kobo is the Clara HD, and it’s one of their more recent releases, initially launched in 2018. It’s one of the more popular models from the brand, and it’s priced at the mid-end of most people’s budgets for an eReader.

The Clara has the same 6 inch screen as the smaller Nia, but it is improved in a couple of key areas. The main one is in it’s ppi, which has been increased up to 300. This increase amount of pixels will give a better and more defined view on the display.

Another area where it’s a little bit better is in it’s front light, which works well if you’re planning to read in dimly lit areas or via a lamp. There’s a reason why the Clara HD is one of Kobo’s more popular models.

Now we’re stepping up to the Libra H20, which is a close rival to the Kindle Paperwhite. It’s another option for folks looking for something at a mid-ranged price point.

Unlike the previous Kobo eReaders mentioned, this model has a larger 7 inch screen. Although there’s an increase in size, it’s still pretty good in terms of ergonomics, and it’s easy to hold with one hand. It has the same Comfort light as the Clara, and a good resolution too.

This is the cheapest Kobo that’s designed to be fully waterproof, and this can definitely be handy to have in an eReader. So if you’re planning on getting on to take on holiday with you, the Libra H20 may be a safe choice for this.

Released back in 2016, the Aura One was Kobo’s original higher end eReader. However, it was discontinued in 2019 in favour of the Kobo Forma, which I’ll get onto in a minute.

It has a 7.8 inch screen, is fully waterproof, and has a good amount of storage space, although it cannot be upgraded, which was a little frustrating for some Kobo fans. It was very similar to the lower priced Kobo’s, just with a larger size and more robust feel overall. 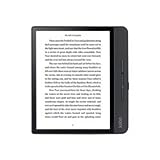 As mentioned, the Kobo Forma came in and replaced the Aura One as the high-end design from Kobo. It’s directly comparable to the Kindle Oasis, and they’re quite similar in their designs and abilities.

Like the Oasis, the Forma comes with 8GB of storage as standard, though it can be upgraded to 32GB is necessary. However, it is a bit larger than the Oasis, with the Forma having an 8 inch screen. This might be preferable for some readers.

It’s also a little lighter than the previous Kobo model, as it manages to stay sub 200g even though it has a larger screen. It fits pretty well into the hand, despite it’s large size.

When it comes to the Kindle range, there are 5 different models that you can opt for. They generally tend to offer pretty good value for money, and you can find cheap and expensive models within their entire selection. However, they all tend to have similar usability and performance.

In terms of library, Kindle has one of the better ranges out there, though the vast majority of their books are all self published. This might put some people off, and is a pretty common reason why some people end up looking at other brands instead.

For the majority of people, Kindle will likely offer the better overall experience of the two. You can pick up a Kindle nowadays from only £50 ($60) for the original Kindle model, and although it’s the lowest price premium eReader out there, Amazon have used their experience to create something that’s excellent value for money.

In terms of usability, the standard Kindle has pretty much everything that you get from the more expensive models. The fews things that it doesn’t have is that it’s not waterproof – only the Kindle Oasis and the Paperwhite are waterproof designs from the brand. The cheaper models from Kobo aren’t waterproof, even though they’re on par price-wise with the Paperwhite.

Another thing that the basic Kindle doesn’t have is a lot of front lighting. Whilst it does have an easy to use light set up, it isn’t nearly as bright as the one that comes with more premium models. You need to go up to the Oasis model if you want more storage space than 8GB too, which may appeal to those looking for audiobooks.

In terms of battery life, both of these brands are very similar to one another. This is also true for the quality of the display, as most e-readers use the same technology. This means that it can be pretty difficult to tell between them when you’re actually using the e reader itself.

We have the Voyage, which has since been discontinued by the brand – we don’t know if it’ll be back on shelves any time soon. But a step up from the standard model is the Kindle Paperwhite. One of the good things about opting for this model is that you can get it with SIM card compatibility, meaning you don’t always need to rely on Wi-Fi.

If you’re looking for the best e reader, then it can be worth upgrading to a larger screen size. The Kobo Forma and the Kindle Oasis are the best of the two brands, but in terms of the device itself, they’re very similar. They’re both easy to read, and they’ll provide a similar reading experience overall.

When it comes to Kindles, The main thing really to consider is the software that’s used on them. This is one key characteristic that makes Kindle devices so attractive, as you can easily gain access to millions of books with the click of your fingers. It’s very easy to flick from page to page, especially with more recent releases.

Kindles now have the monopoly when it comes to e-Readers. With their Unlimited service, which gives you access to millions of books, it’s hard for the competition to keep up.

In conclusion, it’s fair to say that if you’re looking for the very cheapest option out there, then Kindle is very difficult to beat. They have a good standard model to use, which should suffice the average reader.

Kobo’s eReaders are a little more expensive, but they do have flexibility when it comes to downloading books. Whilst their eReader isn’t quite as responsive as Kindle, there isn’t too much between the two brands.

IKEA Office Chair Review | Is the Järvfjället worth it?