There are a few different types of monitors on the market, however the most popular by far are LED and LCD monitors. But what is the difference between these two types of displays? There are some subtle but quite significant differences between products, which could influence your buying decision. However, in short: LCD is a type of LED display. Not all LED displays are LCD, but all LCD are LED.

A little confusing? Don’t worry, we’ll explain it all in this article. Let’s compare LED and LCD monitors to one another.

LED stands for light-emitting diode and LCD for liquid crystal display. The actual name for LCD should be ‘LED-lit LCD display’, but it is normally shortened to just LCD. These names reference the way that they work, however all LED screens are LCD screens; LED screens just have an extra functionality that makes them work differently.

LED screens are named so because of the light-emitting diode lights that are installed in the screen themselves. These screens can be volatile or static; some of them will only respond to touch and others will display a picture even when they are turned off.

How are LCD monitors different?

Older LCD screens used CCFLs, or Cold Cathode Fluorescent Lamps, to light the screen. These use electron discharge and fluorescence to illuminate a screen behind them. However, LEDs have taken over from CCFLs because they are brighter, last longer, leave higher quality images and are more environmentally friendly.

This means that LCD screens lit with CCFLs (known also as LCD screens or monitors) are fading from importance in the market, and LED screens are becoming more and more popular.

LCD screens are still used in watches, calculators and some notebook computers – however, use of LCD-only (CCFL backlit) screens is phasing out. LED (LCD with LED backlit) screens have been used for most flat panel screens since 2010; so your monitor is most likely an LED screen – or if you are thinking of upgrading, you should maybe switch to LED!

LED screens have developed further and OLED and QLED screens are now on the market. OLED technology uses an organic compound that can create impressively high-contrast images.

Products are more expensive but also much more environmentally friendly. QLED screens were created and are patented by Samsung; they create a light with a shorter wavelength which gives more crisp images.

So is LED better than LCD?

If you want to know which type of monitor you already have, then the first thing to look for is the model number. This can tell you if your monitor is LED or LCD. Also, you could check to see if there’s an LED sticker on the monitor itself, as typically these monitors come labelled.

What is Full Array LED?

A common question folks have about LED monitors is what exactly is Full Array LED. This common term can be a bit confusing, and it actually refers to certain Sony monitors.

Essentially, with an LED light, the pixels are backlit or edgelit. This means that the lights behind the monitor are usually designed to light up all of the pixels of your monitor at once. However, with Full Array each of the pixels are lit up individually, which can give more accuracy in terms of brightness. 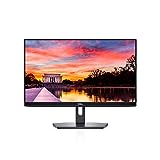 One of the best options for those looking for a smaller monitor is the Dell SE2219H. It’s a well designed 21.5 inch monitor that has LED backlighting and a good picture quality.

It has a completely flicker free screen, and it emits a low level of blue light. Ever had trouble sleeping straight after you’ve spent time on your computer or you’ve been gaming? Blue light is the cause of this, so it could make a lot of difference if you struggle sleeping.

Another plus of this monitor is the thin bezel design, and the monitor itself is clear from any different viewing angle. Overall, it offers well designed viewing technology, and it’s one of the better small monitors available on the current market.

If you’re looking for a wide monitor, then you won’t find a better option on the market than the Samsung LS34J550WQUXEN. It has a high screen resolution, with 1440p being more than enough for most people (who needs 4k?).

It has multiple ports to link up to all of your devices, and it provides a much better contrast than most other cheaper monitors available out there. You can easily set it up to have two displays side by side on the screen, as it’s clearly wide enough to support two displays!

This is about the maximum width you’re going to want to use realistically. So, this is another good option for those looking for an LED monitor.

While there are lots of words flying around about monitors, most of the ones that you will use in an office are LED monitors, which feature LCD technology but with a light-emitting diode. These are much more current than the old fashioned monitors that used CCFLs, and are the best way to get work done in 2020. If you’re looking for a cheap monitor, then check my list of monitors under £150.

Other technologies are used in very specific situations, but not commonly in offices; although as we look into the future, more and more offices are adopting more developed LED technology, such as OLEDs or Samsung’s QLEDs, or alternative technology that has been developed by other companies.