September 7, 2021 by Nathan | *As an Amazon Associate, we earn from qualifying purchases

There are a good variety of different options to choose from when you’re searching for the right gaming mouse. And if you’re looking for a high end model, then it doesn’t really come much better than the Logitech G903.

This mouse is pretty popular amongst the gaming community, and it is well known for being a strong option for those looking for an ambidextrous mouse. Most Logitech mice are designed with right handed folks in mind, so it’s good to see something that can be used by lefties as well.

And when you’re looking for the best wireless mouse, there are many things to take into account. So, let’s take a look at everything the Logitech G903 Lightspeed has to offer. 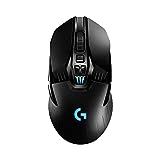 Overall, the Logitech G903 is a high performance gaming mouse that is one of the best around. It does come with a pretty steep price tag which will likely turn some people away. But if you’re looking for an ambidextrous mouse, there’s nothing better available right now.

It is often compared with the Logitech G Pro, which is a very similar mouse. However, the G Pro has a more simplistic and basic design, whereas the G903 is an all out gaming mouse in both shape and function.

Another mouse which is has been compared to is the Razer Mamba. This is one of the most cost effective options from Razer, which is slightly more responsive than the standard G903 Lightspeed.

However, many people prefer the G903 in both design but also in usability too, with a better grip and the ability to use it with either hand. It’s also pretty well known for the mouse wheel that makes it very easy to scroll.

Either way, when you’re looking for a wireless gaming mouse, there are many different options for you to choose from. So what else makes the Logitech G903 stand out from the rest? Here’s a few of its main features that make it a wise investment.

Gaming mice aren’t really known for using wireless technology. However, the G903 manages to maintain a zero lag rate and is as smooth as using a wired mouse.

It’s likely going to be best for those that use a palm or claw grip style when using their mouse. Finger grip gamers would likely be better off looking elsewhere, maybe even at the G Pro instead.

Something that is pretty cool about the Logitech G903 is that the RGB lighting on the mouse itself will change depending on what you’re doing in game. You can keep this on if you like the idea of having cool RGB lighting, or you can choose to turn it off if you want to extend the battery life of your mouse too.

As well as the ability to completely customize the colours that show up on the mouse, you can also use the software to program each of your buttons as well.

Depending on which hand you use with the mouse, you’ll likely want to set things up a bit differently. But, it does make the transition over from another mouse much easier, as you can set the buttons up similar to what you had previously.

You could also consider getting a charging mouse pad to use with your G903. This can keep your mice charging not only whilst you’re not using it, but also whilst you’re gaming with it too.

You can look at the Logitech Powerplay G charging mouse mat, which will enable you to charge your mouse without having to use a cable to do so.

The G903 has a well made and sturdy build quality, which leads many people to think that it would be pretty heavy. However, the truth is that it is actually pretty lightweight when you consider everything that it’s made of.

The mouse actually only weighs 110g, which is pretty impressive when you think about the amount of buttons it has, its long battery life for a wireless gaming mouse and the design of the mouse itself. Most competitive gamers look for a mouse around the 100g mark, so it’s only a little more than what is considered to be the best for most people.

As well as this, there is also an additional 10 gram weight which you can add onto your mouse if you prefer it a little heavier. Some prefer this when they’re playing a fps shooter, as it can make it easier for you to aim.

However, there are other aspects of the mouse which are more important than its weight, which includes its sensor, which allows for a very low click latency.

As with any gaming mouse, the amount of programmable buttons it has is going to be important. With the G903, you can actually program up to 11 of the buttons that are positioned on the mouse itself.

You have the main two buttons at the front of your mouse, with an easy to use scroll wheel in the middle. It can take a little while to get used to the click of the mouse wheel on its top, but it shouldn’t be too much of an issue.

So overall, the buttons are made up of the two main ones, two DPI buttons, three buttons for your scroll click, and four different side buttons that you can use too.

It has two side buttons on the left and right of the mouse which can easily be used for your main actions. This makes for a good gaming experience, and once you adapt to using the mouse, it should improve your gaming.

The thumb buttons are some of the most useful additional clicks that you can use. Typically, people like to use them for key in game moments, like when you want to change perspective, or even potentially for sprinting too.

Something else to mention is that this mouse has a very good report rate of only 1ms. This means that the sensor is very responsive, and when you click a button, there will be almost no delay whatsoever.

As well as the standard Logitech G903, there’s also the Logitech G903 Lightspeed Hero out there as well. It is an improvement on the original version of the mouse, however there is generally very little difference between the two.

The Hero also has a better and more responsive sensor than the original as well. It is increased up to a 16,000 DPI, which when compared to the original 12,000 DPI, is going to be a noticeable difference for those looking for the best in performance.

This is matched by a 1000 Hz polling rate, which is a common standard for gaming mice. It is more expensive, so it is really up to you to decide whether a better sensor and an improved battery life is worth the extra investment.

One of the main things to note about this mouse is that it has an ambidextrous shape. This means that it can be used by both right handed people and left handed people too, which is very important.
There aren’t too many lightweight wireless gaming mice on the market for you to choose from. At a little over 100 grams in weight, this is definitely another key feature of this mouse.
As with any wireless mouse, the main objective is to ensure the performance is the same as a wired one. The good news is that this Logitech G903 Lightspeed wireless mouse manages to do this, with the wireless charging being another good feature.

The main thing that may put some people off from opting for the G903 is the high price. With many folks searching for a cheaper option on the market, it may prove to be a little too expensive if you’re trying to keep costs down to a minimum.
Because this is an ambidextrous design, some right handed users don’t seem to like having programmable side buttons on both the left and right hand side.
For an expensive mouse, it actually doesn’t feel like it’s made of the highest quality. Generally when you spend this kind of money on a mouse, I think most people will expect a more premium feel than this mouse provides.

In conclusion, it is fair to say that the Logitech G903 Lightspeed is definitely one of the better wireless mice available right now. It has a good shape, a very responsive sensor and high DPI, and you can easily program each button to what you prefer, which can help to improve your overall performance.

The ability to charge the G903 wirelessly with the Powerplay is something that most mice don’t offer. Though it is a little expensive, if you can afford the luxury then it does essentially mean that your battery level will never run out. This is ideal for long gaming sessions.

The main question with this mouse comes with its price, and whether it’s worth the money. If you’re looking for a high end wireless mouse, then this may prove to be the right choice for you. However, it is expensive, and similar mice made by Razer and other gaming brands might be able to provide better value for your money overall.

Huawei Mediapad T3 10 Review – Easy to use but limited power