If you’re looking for a wireless mouse, then you’ve likely come across both the Logitech M325 and also the Logitech M310 as well. They’re both quite standard mice with a very similar price point.

Not everyone is looking for a super sensitive mouse that has a high DPI and a fast FPS. Some people are just looking for a reliable good quality wireless mouse to get their daily work done.

The main difference between these two different mice is that the M325 is the slightly smaller of the two, and better for those with small hands as it has a very strong grip. It also has a longer battery life than the M310 too. The M310 is only an average size, but it’s both bigger and heavier than the M325.

In terms of similarities, they are actually very alike one another. Firstly, they’re both ambidextrous, which can definitely be useful if different people may be using your computer. There’s nothing worse than trying to use a right handed mouse when you’re left handed.

Another area where there is not much between the two wireless mice is in their price. You can usually find them within a similar price point to each other, which is likely what makes it difficult for people to decide between them.

But, these aren’t the only differences and similarities that these two mouse share, and there are definitely more that you should be aware of. Let’s look at the M325 and the M310 in closer detail. 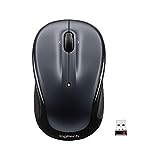 For those looking for a pretty standard mouse, the Logitech M325 is likely to be one of the first you come across. It’s not the best to look at, but it’s definitely a solid choice in terms of reliability.

Although it has a fairly basic design, it’s still probably the top Logitech mouse when it comes to price and simplicity. You can connect it up quickly with the unifying receiver. And when you’re using it, the patented Logitech scroll wheel makes it a joy to use.

If you’re a long time user of Logitech mice in general, then you’ll probably be a fan of the M325. It’s designed in the same fashion as many of the older mice that the brand have released, and has that same ergonomic style that we’ve all become accustomed to.

This is probably one of the best wireless options out there right now, especially if you’re trying to not spend a ton of cash. So, adding it to your list of things to get is probably a good idea.

The M325 has one of the best battery lives of any cheap budget mouse on the market. You should get more than 12-18 months out of a double A battery, so you won’t need to worry about switching batteries in and out all the time.
This model has a very well designed scrolling wheel, which is a bit slow but really good for those who often need to use it. It uses a Logitech precision scroll wheel, which gives you much more control over your scrolling.
Out of these two mice, it’s actually the cheaper and more affordable of the two. It does vary depending on where you find the mouse for sale. You can connect it up with the Nano receiver within a few seconds.

This is quite a small mouse, so it won’t be suitable for people with bigger hands. They will probably feel like a giant when they’re using the M325.
The scrolling wheel on this mouse is completely smooth, which many people will like. But many other Logitech mice had more rugged wheels which would give feedback and a lot of noise, so it might feel a bit different to use.
Although it doesn’t feel cheap, it is made of plastic, so it doesn’t have that super high quality feel. 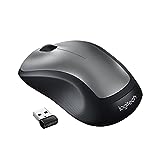 It’s hard to really compare these two mice too much, because they’re very similar to one another. The M310 often retails at a slightly higher price though, although I’m not exactly sure why – it’s not better in terms of quality than the M325.

Like the M325, it’s completely ambidextrous and designed to be a casual mouse as opposed to the many gaming options that are around nowadays.

It’s comfortable to use for long hours of work, and it’s as basic as they come. It has a competent micro precise scrolling wheel with responsive and smooth cursor movement.

The scroll wheel is one of the key areas the M310 is a little better. This is very important for many people, with most users being particularly picky about having a decent and responsive scroll wheel.

Whilst there isn’t too much between the two, it’s the better choice for those with larger hands – though neither of these mice are particularly big.

The M310 has a perfect ergonomic finish, meaning that it’ll fit into your hand perfectly. If you’re used to using mice without ergonomics in mind, then this could be very useful for you (and your wrist!).
It’s simple to set up, with all you need to do being plugging the USB receiver into the side of your laptop or computer.
Like the M325, this mouse has an extremely long lifespan, and will last a good year off of just one battery. This is definitely useful if you’re making the switch over from a wired mouse.

Even though you’d be forgiven for thinking the M310 would be the cheaper option out of these two, it’s actually a bit more expensive than the M325.
The M310 definitely isn’t a quiet mouse, so if you’re looking for something silent, then this probably isn’t the right option for you.
Like all fairly cheap mouse, they’re well made but they will probably only be good for 3 years of use before you need to invest in a new one.

Overall, both mice are quite similar to one another, and there isn’t a big difference between them. As the M325 is the cheaper of the two, I’d advise that you opt for that one. Another similar mouse is the Logitech M705.

The differences between the two mice are pretty insignificant, so if you can find the M325 for a cheaper price, then you should probably opt for that. However if a good scroll wheel is important to you, then don’t overlook the M310.

Gaming Mouse vs Normal Mouse | Which is the better choice?

How to clean a laptop keyboard without breaking it