September 7, 2021 by Jon | *As an Amazon Associate, we earn from qualifying purchases

There are quite a lot of different budget mice on the market to choose from. If you’re looking for reliability, it’s always good to opt with a big brand name that offers a decent warranty that will cover you for any faults or damage.

And, there’s none bigger than Logitech. Two of their lowest priced mice are the Logitech M705 and the M510. They’re often overlooked in favour of faster, more customizable options – but these are not features that everyone needs. If you’re just looking for a solid and reliable wireless mouse, then both of these mice appear to fit the criteria.

But out of the two of them, which one is the better option? Well, let’s compare the two mice to each other so we can see the differences and similarities between them.

The difference between these two wireless mice is that the M510 is the cheaper of the two, and is a better choice for travelling with. The M705 has a longer battery life and a more ergonomic design, which could be a deciding factor for some people.

When you’re hunting for a really good wireless mouse, then this isn’t all you’ll want to think about. These mice are very similar to one another in certain areas – they have an equally good sensor, so they’re both fairly sensitive mice as well.

The key area where they are different is their price – although they are both budget friendly options, the M510 is the cheaper wireless mouse. They’re two full sized mice that are considered to be a safe and good choice if you don’t need anything special – just a basic, reliable peripheral that works.

So, we know that price, battery life, portability and design are key factors to consider when choosing between the two. But what else is there to think about? 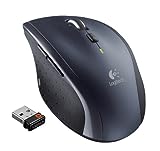 The M705 has been a long time budget friendly favourite made by Logitech. It’s been cutely nicknamed the “Marathon” mouse, because it’s great for those who need a long battery life. It has around double the battery life of other budget mice out there, so it lasts for quite a while.

If you’re looking for something ergonomic, then this would likely be a pretty safe choice. The inner curvature is designed to try and match the natural position of your hand, though it does lack rubber grips on its exterior, which may make it a little better to use.

It’s designed specifically for right handed people, so if you spend long hours at your desk gaming or even just working, it might be a good companion. But obviously, it’s not going to be a good choice if you’re ambidextrous.

Another good thing about this mouse is that it comes with a tiny Logitech unifying receiver, which is good for plugging directly into your laptop or computer and not taking up a whole lot of space. It’s a pretty good option if you’re looking for a cheap mouse.

Though the sensor isn’t particularly sensitive, it does respond well when you’re using it, and for the price it’s quite responsive. It works fairly well with both Mac and Windows operating systems, and you can use it with Linux as well if you need to.

The main selling point of the M705 is that it has an extended battery life, which will last longer than the other competitors within the same price range.
The mouse itself is well designed, and it fits into the palm well, making it good for long hours of use.
It’s a pretty cheap price for this mouse, and it’ll definitely be a step up from the standard mouse you might be using at the moment.

Logitech have updated the M705 from the old model, which in my opinion was a lot better than this current mouse. They basically released an updated version of the M705 which uses cheaper parts, which is a bit sneaky if you ask me.
Although it’s cheaper than most other mice out there, it also feels of a lower quality too – unlike most other Logitech mice. 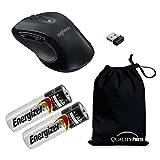 For those looking for a budget friendly mouse, then one of the best options that Logitech offer is the M510. It’s a cheap alternative to many of the other more expensive Logitech mice out there.

If we’re being completely honest, there’s nothing special about the M510, and it’s certainly not something to write home about. It’s a basic mouse designed with travel in mind. This means that the build quality is solid, and it won’t break easily.

The contoured rubber grips on both sides of the M510 do make more comfortable to use. Plus, it has an accurate scroll wheel on the top, as well as two additional buttons on the inside of the mouse.

If you’re not looking for a super fast mouse or anything specific and you just want an improvement on your current mouse, then the M510 may be a good option for you. It isn’t going to blow you away, but it does a reasonable job at what it’s supposed to do.

Out of the two mice, this one is quite a bit cheaper in price. It’s a better option for those seeking a budget mouse.
The connection between the mouse and your laptop is reliable, and like most other Logitech products, it’s functional too.
It’s designed to be used easily for travelling, and it comes with a free travelling pouch. It’s quite robust, so it isn’t going to break very easily.

Though you can’t expect too much from a mouse of this price, it’s definitely nothing too amazing that will blow you away. It’s a pretty basic mouse designed to get the job done.
Although this is a good basic mouse, it’s not going to be suitable for those that are looking for something more responsive for gaming.
Because it has a set of buttons down the lefthand side of the mouse, it’s not suitable for left handed people.

Overall, both of these mouse are in a similar category to each other and there isn’t much of a difference between them. If you want a step up in terms of quality, check out the Logitech Anywhere series.

This being said, it’s pretty clear to me that the M510 is the better choice of the two. It’s actually cheaper than the M705, but it offers more in terms of both responsiveness and overall quality too. So, opt for the cheaper and more reliable M510 if you can find it for sale on the market.

Why does my mouse keep freezing? – 8 reasons why