March 23, 2021 by Steve | *As an Amazon Associate, we earn from qualifying purchases

If you’re searching for the best soundbar to use with your TV, there are many different options that you can choose from. It can be a little difficult to decide on which option to go for. This is especially true if you’re on a tight budget, as it can be tough to know which is the right choice.

One soundbar that you could look at getting is the Majority Snowdon ii. It has pretty good feedback for what it is, and it’s a well priced soundbar too that isn’t going to destroy your bank balance.

But just how does this soundbar compare to others on the market, and is it worth looking at? Well, we’re going to look at the Majority Snowdon ii to find out if it’s a decent purchase or not.

All in all, the Majority Snowdon ii is a pretty competent soundbar, especially when you consider its low price. Though it’s nowhere near the quality of more expensive soundbars, pound for pound it’s one of the best value options available today.

It’s very easy for you to mount this soundbar to your TV. Let’s look at it in more detail, starting with the brand itself, as many people won’t be familiar with them.

Unlike most of the big global manufacturers you’ll find online, Majority are a much smaller independent company (although the name doesn’t sound like it).

They’ve tried to find a gap in the UK audio market, where brands like Kef are too premium to consider for the average person. Even when looking at Sonos and Bose, they’re a little too expensive for some people who don’t want to spend hundreds of pounds on a soundbar.

It’s a good idea, and the Cambridge based brand have been around for almost a decade now. Although they started out as a fairly small brand (and still are compared to brands like JBL etc), they’ve proved to be fairly popular and have sold more than a million units across Europe.

So, the sales of their speakers really talks for itself when it comes to popularity. The Snowdon is the name for their soundbar, but they also have other unique names for their other products, like the Eaton CD player and the Fitzwilliam Dab Radio. 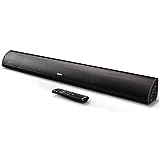 The Snowdon ii is a definite improvement on the original soundbar released by Majority. It’s considered to be one of the best options currently available in terms of price.

One good thing about the Snowdon ii and Majority in general is that they offer pretty extensive 3 year warranties. This covers any problems you might have with it for the first few years, at least.

The first thing that we want to look at is the design of the soundbar overall. It weighs just over a kilogram, and it’s around 80cm in terms of length.

It’s 8x8cm in terms of width of the soundbar, too. This means it can fit pretty neatly on your TV stand, preferably below your TV. It’s also wall mountable as well, which makes it easy to fit into your home setup. Check out our guide of how to mount a soundbar to a TV if you need some help.

It’s very easy to get started with using this soundbar with either your TV or with your phone too, if you use Spotify, Apple music or whatever else, you won’t have any trouble playing these with this model. It’s also very simple to connect it to your Alexa as well.

It’s 120w in terms of power, which is more than most of the other competitors within a similar price point. If we’re thinking practically, it would fit nicely with any TV to be honest. But, it’s more likely to be suited to those 40 inches or more in terms of aesthetic.

Above everything else, the most important factor when considering which soundbar you want to opt for is performance. Not all soundbars will be suited to what you’re looking for.

For example, the Snowdon ii is a pretty competent performer if you’re looking for a cheap soundbar to use with your TV. It manages to pack a punch in terms of volume, and it can help take your television up a level and give you a surround sound experience.

It’s intended to be able to give you a home cinema like sound for a budget price. In this aspect, I’d say that it does it’s job pretty well. The 120w speaker can definitely cope with being played at loud volumes, so it’s the perfect accompaniment for action movies.

The style of this soundbar is a 2.1, which is meant to replicate the same sound you’d get from a surround sound setup. It’s pretty successful in doing so, and you have the ability to adjust the bass and treble to your own preference (there are 4 different EQ modes on this soundbar too),

But if you’re looking for a cheap improvement on your TV speakers, then this is definitely a wise choice. You’re definitely going to get a better audio experience than using the speakers that are in-built into your television.

One of the main things to consider when looking at cheaper soundbars is how you can connect to them. Modern options tend to have many different ways you can link your television or device to the soundbar, and this one is no different.

The good thing about this soundbar is that you can connect it to your television very easily, with the most standard option, which is using an optical cable. As well as this, you can also connect to it via Bluetooth, which is useful if you want to link your phone up to it as well.

The only thing to mention is that it doesn’t have a HDMI connection, which is a little bit annoying. But apart from this, it has most of the connectivity you could need. Make sure to connect it via an optical cable if you’re looking for the best sound quality from your connection.

I’ll also mention that it isn’t Alexa or Google compliant either, so you won’t be able to set it up with either of those smart speakers. But this is pretty typical for a lower costing sound bar like this one.

The main reason you’re going to want to consider the Snowdon ii is undoubtedly price. if you’re looking for a super cheap soundbar, there’s no better option out there.
Although it’s not amazing for bass, the built in subwoofer does help it to deliver some good low frequency sounds, which is impressive for its price.
It’s a cheap soundbar, but the curved front of it make it appear to be of a better quality than it actually is. The finish on the soundbar overall is pretty nice.

There’s no doubting that this is a budget soundbar, and it won’t compare to those that are a step up in quality.
Something that will put a lot of people off is that it doesn’t have any HDMI port on it. So, you’ll need to use an optical cable, Bluetooth or an AUX connection.
Like many cheaper soundbars, the screws that this comes with aren’t great. If you want to mount it on the wall, you might want to look for a different mounting kit.

Overall, there’s no doubting that this is a pretty solid soundbar if you’re looking for something to use with your TV.

It’s very cost effective, and if your in-built television speakers suck, then this is definitely going to be a big step up in terms of sound and audio quality. Those that are looking for an immediate improvement without having to spend a ton of cash will appreciate what the Majority Snowdon ii has to offer.

Though if you’re looking for something with real quality, you’ll need to up your budget a little in comparison to this soundbar. But for the price, it’s pretty difficult to find anything better out there.