When you’re looking to get a new mouse for gaming, or even for casual use, you’re going to come across Razer’s range of mice. Aside from being aesthetically very good looking, they’re also some of the most practical and responsive mice on the market.

There are several different ranges that Razer offer, and it can be quite difficult to know which one of these might suit you best. Two series that they offer are the Mamba series and the Deathadder series. These are both within a similar price range, so it can be difficult to tell them apart.

Aside from this, they also have many of the same features, like having 7 programmable buttons each and being compatible with Chroma RGB lighting. But if you’re trying to decide between the two, which should you choose? Let’s take a look at the Mamba first, and then a look at the Deathadder too.

The differences between the Razer Mamba and the Razer Deathadder are actually quite minimal – in fact, the Mamba is often referred to as the wireless Deathadder. And this is the main difference – the Mamba comes as a wireless mouse, whereas the Deathadder Elite is wired.

Both mice are perfect for folks who use a palm grip with their peripheral, but they can also suit a claw grip too if you have smaller hand sizes. They’re both made for folks that are right-handed, so they’re not suitable if you need something you can use with your left.

This isn’t their only difference, but it’s the main one. You can also check out which Razer mousemat is better too. Let’s find out more about the Mamba. 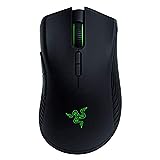 The Razer Mamba has been one of the brands bestselling gaming mice over the past few years, and it’s pretty easy to see why. The high 16,000 DPI is the stuff gamer’s dreams are made of, with a high sensitivity being one of the main things that a gamer is looking for.

The Mamba is available in both a wireless and a wired version, and you can find special releases of it sometimes too (I’m thinking of the Gears of War Edition that was released a year or so ago). It’s one of the best gaming mice on the market if you’re looking to spend a reasonable amount.

The wireless version of the Mamba weighs a little more than 100g, which is relatively heavy for a modern gaming mouse. It actually wasn’t when it was first released, but with so many other options released on the market, there are lighter options available nowadays.

Now, there is also a Razer Mamba Elite as well which you could opt for. However, this isn’t a wireless mouse, so it is much more similar to the Deathadder series, and there is very little difference between the two. The Mamba Elite has two more buttons than the Deathadder Elite though.

The Elite Razer Mamba is a great mouse in its own right. The ergonomics are great, and the side grips help to make it very easy to use when in hand. It also comes with lighting strips that can be changed using Razer Synapse, the company’s software.

So whilst you can check out the Razer Mamba Elite as well, this isn’t what we’re focusing on here. We’re really looking at the standard Mamba, as that’s what is most different to the Deathadder series, and especially the Deathadder Elite.

This mouse is, as you’d probably expect, extremely well designed and made to last. There’s a reason why it’s remained one of the more popular Razer models for some time now.
One good thing that the wired Razer Mamba Elite has is that you can use the scroll wheel tilt to change from left to right, which can prove useful for gamers. The wireless doesn’t have this function, unfortunately.
You can charge this mouse up pretty easily, and on a single charge you’ll get a few weeks use out of it (it lasts for more than 50 hours, so I guess it depends how often you’re gaming!).

The older models of the Razer Mamba had a tilt wheel on them, which can come in very handy for gaming. But, the wireless version of the Mamba doesn’t have that, instead changing it for a standard scroll wheel, which is a definite downgrade.
Although this is a well built mouse, overall I’d say that the Deathadder Elite has the better build quality of the two mice. But they are similar, and it isn’t much better, as there really is little difference between the two.
As normal with Razer mice, you actually can’t use the cool Chroma lighting on the mouse itself without downloading their software, which is just annoying. 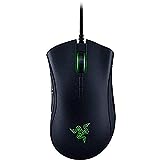 Like the Razer Mamba, the Deathadder Elite’s main selling point is that it offers great sensitivity – it also has up to 16,000 DPI capabilities. This is one area where you can’t really decide between these two mice, but that’s not a bad problem to have (at least you know either one you opt for will be responsive!).

As default, the mouse has next to no lift off distance – you can change this in your Razer Synapse settings, though. Neither mouse is ambidextrous – it’s worth looking at the Razer Viper if you’re something you can use with your left and right hand.

So, we know that both mice have a very responsive optical sensor making them ideal for gaming. They are also both designed for right handed people, and they have an array of side buttons you can use as well. Lets look at the positives and negatives of the Deathadder Elite.

Although many people have asked Razer to make one, there’s still no wireless Deathadder available for us to purchase, with the Mamba essentially filling this gap.
Another area where I’d like Razer to improve the Deathadder Elite is in it’s scrolling wheel, which isn’t the smoothest and after time can get pretty squeaky.
Like the Mamba, one of the most annoying things about the Deathadder Elite is the software that it comes with!

It’s very difficult to decide between these two as they’re so similar to each other. The Mamba is often referred to as the “wireless Deathadder”, so you can see how alike they are and how users think of them.

Quite simply though, if you really want a wireless gaming mouse, then opt for the Mamba. It’s a little taller than the Deathadder series, although the grip width is about the same.

If you’re rather a wired mouse, then I’d stick with the trusted Deathadder Elite. The V2 of the Elite helps to ensure that it’s still one of the best gaming mice on the market.

What is keyboard ghosting and how do I prevent it?

Logitech mouse not working properly – What you should do