March 14, 2021 by Jon | *As an Amazon Associate, we earn from qualifying purchases

For folks that are on the go a lot, it’s a good idea to get yourself a wireless Bluetooth speaker that you can take with you anywhere. You can use it around the home, in the garden and even take it to the beach with you too.

And if you’re looking at portable speakers, then two that you’ll likely come across are the Boom 3 by UE and the Charge 4 by JBL. They’re two very popular models that have been released recently. However, they’re a little different to one another in terms of design.

What are the differences between the UE Boom 3 and the JBL Charge 4? Well, there are a few things that you’ll want to know if you’re thinking about investing in one or the other.

It can be hard to tell these two speakers apart. They both have a waterproof design, a similar battery life and a similar frequency response range to one another.

With the Boom 3, you can benefit from wireless charging with their Power Up charging dock. On the other hand, the JBL Charge 4 probably has the edge when it comes to sound quality. It’s hard to separate the two, as they’re actually more similar than they are different.

Both Ultimate Ears and JBL are two of the best known brands when it comes to portable Bluetooth speakers. Whilst JBL have a long track record and make speakers of all different shapes, sizes and budgets, Ultimate Ears are specialists in wireless speakers, and they have a few different models that are pretty decent.

Lets take a look at both of these speakers in closer detail, starting with the UE Boom 3. 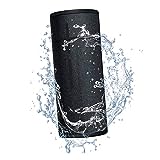 One thing that has been added to the Ultimate Ears Boom 3 to make it a little better is the Magic button. This is what users asked for in newer models, and to be fair to the company, they delivered.

It enables you to quickly connect your device to the speaker with no hassle, which is a definitely advantage of this model. It can also be used to play and pause audio too whenever necessary. The Ultimate Ears Boom 3 is probably best known for its waterproof design, but that’s not all it has to offer.

From a design perspective, this is one of the better portable speakers out there. It’s lightweight and easy to carry, and it’s a good size to easily fit into your backpack as well.

The Boom 3 is definitely a lot more attractive than the Charge series, which although performs well, is a little bit tacky.

The battery life is one area of these speakers where they’re pretty equal to one another. You’re stated to get around 20 hours of battery life from the UE Boom 3, but this is a little over-optimistic. You can charge it using a simple USB-C cable.

This is very similar to the JBL Charge 4, and you’re only going to see a minimal difference between the two.

Whilst it does pretty much everything else with perfection, the main criticism of the UE Boom 3 is undoubtedly its sound quality.

Although the sound isn’t bad, when you compare it to the overall quality of the Charge 4, it sounds very tinny in comparison. It can’t cope with delivering bass nearly as well as the Charge.

The speaker is lightweight and very easy to carry around with you.
It’s 360° design is definitely something that many people like from newer speakers.
Visually, it’s much more attractive and better designed than the Charge 4.

The main downside of the Boom 3 is that unlike the same suggests, it doesn’t produce bass as well as the Charge 4.
Battery life isn’t as good as advertised.
Not a massive fan of the UE app.

Overall Verdict: The Ultimate Ears Boom 3 is a perfectly fine portable speaker that’s lacking a little bit in terms of power. But for my money, I’d rather check out the UE Megablast or Megaboom.

Considered as one of the best portable Bluetooth speakers on the market, UE and all the other speaker brands have to go some way to match the Charge series. It’s been some time since the first generations were released – the Charge 1 & 2 weren’t met with the best reviews via critics.

Fast forward to the Charge 3, and things had improved a lot, with one of the main ones being an increased water resistance.Then onto 2018 and the release of the Charge 4, which is what we’re looking at today, and it’s a vast improvement on the original. It is undoubtedly one of JBL’s better selling models of recent years.

The Charge 4 weighs around a kilogram, and it’s a fairly long speaker at 22cm in length as well. It’s a 30 watt speaker that packs a lot of power, and it uses Bluetooth as a means of connection, or AUX if you wish.

You can link it up to two devices at once, which comes in handy if you have multiple people using the same speaker.

Unlike many other speakers out there, the JBL Charge 4 has a long 20 hour stated battery life. And in real life, it lives up to expectations and can actually match what the brand state.

It has one of the longer battery lives out of any budget portable speaker out there.

This is one of my favourite options if you’re after a great sounding portable speaker. Like the UE, it has a 60Hz – 20kHz frequency range, but it delivers well at the lower end.

The good thing about this speaker is that even when you’re playing it at its highest volume, you’re only going to get minimal distortion, if any.

The JBL Charge manages to deliver good quality sound at all different ranges, including some excellent bass.
Strong and long lasting 20 hour battery life is impressive.
You have the ability to pair two Charge speakers to one device at the same time.

The main downside of the Charge 4 is the JBL Connect app, which isn’t as good as it should be.
May get some lag when first connecting up with Bluetooth.
Not as good in the water as it is out of it.

Overall Verdict: For its low price, it’s definitely one of the better options out there if you’re looking for a reliable Bluetooth speaker.

All in all, these speakers are quite similar to one another. For example, these two speakers are often up for the same price, which is probably why they’re compared to each other so much. They both offer full water resistance, and they also have pretty much the same battery life (20 hours) as each other too.

Though, there are some differences between the two which we can break down pretty easily.

Battery – The Charge 4 is the winner in terms of overall battery life, as it’ll last longer than the Boom 3.
Audio – The Charge 4 is the undoubted winner when it comes to sound, as it’s much better quality overall.
Size – As you’d expect, with more power comes a heavier weight and larger size. The UE Boom 3 is much lighter and better for those travelling often.

Overall, these are both two good quality speakers that have a lot to offer. They’ll typically have a similar Bluetooth range, working up to 10 metres away from your device.

For your money, the JBL Charge 4 provides better value for money, and it performs better in terms of sound quality. If you’re looking for a lightweight speaker that’s easy to carry, then you could consider checking out the UE Boom 3 too.