May 25, 2022 by Jon | *As an Amazon Associate, we earn from qualifying purchases

There are different brands of portable speaker out there for you to choose from. Whilst names like Bose and JBL are well known within the market, you can also look at lesser known brands like Ultimate Ears too.

I say lesser known, but Ultimate Ears (or UE) have made a name for themselves over the last few years. Their small range of Bluetooth speakers is good quality, loud and above all, cost effective.

Two of the most popular models that they sell are the Megaboom and the Megablast. But how are these two speakers different to one another? That’s what we’re going to try and find out.

These speakers are very similar to one another, and it can be difficult to tell them apart. However, the key difference is in the volume, where the Megablast is a little louder.

Also, the Amazon Alexa integration is another big factor for some people; the Megablast can be integrated with Alexa, whereas the Megaboom 3 can’t. This could be a big factor in your decision if you have other smart home devices that you want this speaker to be a part of.

So, the Megablast is a smart speaker. But as well as this, it also has a higher maximum sound level overall. This might lead some people to choosing this option, as it means that it can double up as a home speaker as well as being portable.

Aside from this, there’s actually very little difference between these two pretty impressive speakers. But, we’ll continue to look at them both in a closer detail to find out more about them. 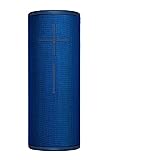 Released towards the end of 2018, the Megaboom 3 has proven to be one of UE’s most commended and well received speakers that they’ve released. It’s a good improvement on the original, and it generally has a whole lot to offer.

Design: What the Megaboom 3 is probably most well known for is its design. It’s fully waterproof, and it’s made to be very resilient, which makes it the perfect speaker to use when you’re outdoors.

The fabric is improved on this model, so it’s even more long lasting and durable. The 360° design of the Megaboom must also be commended, as it allows the audio to be delivered equally.

Battery Life: The battery life of the Megaboom is definitely pretty impressive. They state a maximum battery life is 20 hours, and although it might not quite manage to meet these heights, you’ll be using it for a while before it needs recharging.

You can charge it to full battery in just a few hours. Overall, it has a longer battery life than the Ultimate Ears Megablast, with this increase lifespan being a key feature for any Bluetooth speaker.

Performance: Although overall the speaker does sound very good, it could definitely be a little clearer all around. They both have a similar frequency range, however the Megaboom does have larger passive radiators than the Blast, which can help with lower sounds.

And if you intend to take advantage of the speakers waterproof nature, as it doesn’t sound as good when it’s in the water. As a party speaker, you’d expect it to have a bit better sound, though both of them are water resistant.

The design is something that UE excels in, and the Megaboom 3 is one of their best.
Easy connect with up to 150 other Megaboom speakers.
It’s designed with simplicity and ease of use in mind.

Although it does well at all ranges, clarity could be improved.
The lack of Alexa voice integration will put some people off.
No wifi options or AUX, only connect with Bluetooth.

Overall Verdict: It’s still one of the best Bluetooth speakers to come out in recent years, and there’s little difference between these two. The 20 hour battery life of the Megaboom is the main thing that stands out.

Released a little bit before the Megaboom 3, the Megablast is one of the less popular speakers from UE. However, it’s still a perfectly respectable speaker in its own right.

It has a good Bluetooth range, as well as being one of the better options out there when it comes to sound quality. But this doesn’t really separate it from any other Ultimate Ears speaker, as they’re all made to the same standard.

Design: Definitely one of the better designed speakers out there in terms of appearance, it’s a simple yet well made speaker. It’s definitely worth mentioning that this is more of a home and portable speaker, as you can connect to it via wifi.

The Megaboom 3 is a strictly portable speaker, and it doesn’t have the same capabilities if you’re looking for something that can be used at home.

Battery Life: The Megablast has a perfectly good battery, but it isn’t quite as good as the Megaboom 3 and other portable speakers similar to it. This is likely because it’s not a true portable, and is intended to be good for the home as well.

You’re likely going to get around 16 hours of life out of this speaker, which is 20% less than the Megaboom.

Performance: As I’ve mentioned, this speaker manages to be louder than the Megaboom, with a 93dB maximum volume. Even though it can be played at very loud volumes, it does this without suffering from distortion.

It has two large active drivers which manage to deliver a louder sound, and works excellently as a pair.

Undoubtedly one of the loudest portable speakers currently available.
One of the better looking speakers that UE have released in the last few years.
Being able to use it with your smart home speakers is a plus, along with wifi connectivity.

The main negative about this speaker is the software it uses, which definitely lets it down.
The Megablast had a relatively good battery, but it isn’t as good as the Megaboom.
It is bulkier in design than the Megaboom.

Overall Verdict: A very good speaker for anyone looking for something they can use as easily in their bedroom as they can at the park or beach.

In conclusion, it’s fair to say that there’s very little difference between the two. I’d say that if you want the Alexa integration, then the Megablast will prove to be the better option of the two. It is usually more expensive than the Megaboom though.

With that in mind, I’d opt for whichever one is cheaper at the time – Amazon often has sales on Ultimate Ears speakers. And if you don’t need smart compatibility, the Megaboom 3 is still a fine option.

SSD not showing up in disk management – Fix