If you have £1000 to spend on a laptop, then this is a good amount and you should be able to get something really solid. You need to know what you’re looking for when purchasing any laptop, especially if you’re going to spend this kind of money. However, there are a few options on the market that provide great value for money and will ensure that your pennies have been well spent.

As long as the laptop has the power that you need, then you should be good to go. So, let’s look at the best laptops that you can find that are less than £1000. 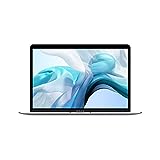 When we’re talking about laptops around the thousand pound mark, the Macbook Air is always going to come up.

It’s priced at a similar rate in comparison to other premium laptops on the market – the Lenovo Thinkpad and the Dell XPS series come to mind. But, there are two main ways that the Macbook beats them hands down. Firstly, it’s the user experience. This is especially true if you use an iPhone, and if you do, I’d advise you to opt for a Macbook to go with it.

Secondly, the customer support that Apple provide is a million times better than any other computer brand out there. If you get a warranty with your Mac, then this is going to cover you for pretty much anything – just take your Macbook to your local Apple store and you can get it fixed, no questions asked.

So in terms of the amount of power and storage you’re getting for the cost, are Macbook’s expensive? Yes, but the benefits that comes with them will makes a difference for a lot of people, which makes them a great choice to opt for. 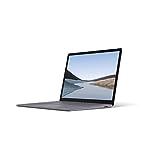 If you don’t want to opt for an Apple laptop, then there are a ton of other options out there. One of my favourite’s is the Microsoft Surface series, with the Surface 3 being one of the best models out there.

Let’s start with the good things about this model. It’s definitely a good option if you’re concerned about the appearance of your laptop, as it’s very stylish. However, the majority of you won’t be too bothered about this!

So what about the specs? Well, it comes with 8GB of RAM and an i5 processor, which is going to be fast enough to run most of the programs you need it to. Only gamers will really need to look at getting more power than this, and if you are a gamer, I’d advise you look at 16GB RAM laptops instead.

It also comes with 128GB of SSD storage space, which might not seem like enough. However, with most people using cloud storage like Google Drive nowadays, it won’t be too much of an issue unless you’re planning to download a ton of files and programs.

The only bad thing about the Surface 3 is the battery life, which isn’t as good as other laptops out there. Whilst the advertised battery life for this model is around 11.5 hours, you’re not really going to get this length with this model. So if you really need a laptop that has a substantial battery life (if you take long journey’s often where you might not get the chance to charge it), then you might want to look at another model.

If you want something with more power but still less than £1000, then it’s worth looking at the Dell Inspiron 5491. You can purchase the model with 16GB of RAM, which will give you a faster running laptop – the additional RAM will enable your laptop to juggle more programs at the same time. So, you’ll be able to cope with a higher workload, which is useful if you’re using large-sized programs, like games or graphic design software.

The Dell Inspiron 5491 is a solid choice for anyone looking for a powerful 2-in-1 laptop. This will give you the ability to use it as a drawing tablet too, so you might want to pick up a Stylus as well. If you combine the HD touchscreen display with the tablet function and then the 16GB of RAM, you’re going to have a great laptop for someone who want something interactive. It also comes with a fingerprint reader inbuilt too, which although isn’t essential, is definitely a nice touch (nice touch, get it?… I’ll let myself out).

So yes, the specs of this model are really good for the price, and they’re all wrapped up in a slim design too. It’s another possible option for those looking for a powerful laptop that’s less than £1000.

What are the most sold laptops?

If you’re wondering which brands are the most sold worldwide, then the current leader is Lenovo, followed closely by HP and Dell. Despite what many people think, Apple aren’t as bigger market share holders within the laptop industry as of yet. However in terms of the models, in Western countries two of the most sold laptops are the Macbook Pro and the Lenovo Thinkpad – these are often bought in bulk by companies, or even in the education industry by universities for their students.

Which processor should I opt for?

When you’re purchasing any laptop, the specifications can be quite confusing. This is definitely the case when you’re looking at processors, as many people don’t know the difference between an i3 processor and an i5 processor. Typically you’ll get better CPU performance from an i5 processor than an i3, however this isn’t always the case. Even some of the newer Macbook models are released with an i3 processor, and they’ll perform better than another brand laptop with an i5. So, don’t focus on the processor too much unless you’re more experienced with laptops and looking for something specific.

Which laptop is best for students?

If you’re a student and you’re looking for a laptop, then there are many different models for you to consider. In my opinion, I’d stick with either a Macbook or even the Microsoft Surface if you’re looking for something with a long battery life. For most students, one of the most important things is that you have a responsive keyboard, as you’re going to be typing a lot. So, make sure you check the reviews of the laptop’s keyboard you’re going to be purchasing first!

Can a laptop last 10 years?

The majority of people say that a laptop will last you anywhere between 3 and 5 years. However, if you buy the right laptop, then it can last you a lot longer than this. Of course, in ten years time some of the hardware used to make your laptop will be outdated. However, many laptops do still have the potential to last you 10 years.

Why do laptops break so easily?

If you’ve had a laptop break on you in the past, then I know your pain. But seeing as laptops are so important and expensive, why do they break so easily? Well the answer is that it’s made up of components that are just, unfortunately, easily broken. When you look at what a laptop is made of, many of it’s parts are fragile – it’s screen, it’s hard drive and a whole lot else. So unfortunately, laptops are just fragile by nature.

All in all, these are just a few of the options that are out there for you to think about. Whilst the Macbook typically rules King around the £1000 mark, there are many other options out there to consider as well. It really depends on what you’re looking for. If you want great UX, then opt for a Macbook. But if you want more power, then you’re better off looking elsewhere.