When looking for a laptop, the first thing to consider is your budget. If you just want a basic laptop to browse the internet, then you can find something usable for even less than £200.

Whilst the majority of laptops will be more expensive than this, there are a few that fit into this price bracket. Sure, they’re not going to have much RAM (memory) and they won’t be great for people who use a lot of programs. But for casuals, a cheap laptop can be all you need on a daily basis.

But which laptops should you be considering if you’re looking to keep costs as low as possible? Well, here I’ll take a quick look at some of the best laptops under £200. 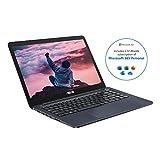 When you’re trying to get a laptop for less than £200, there isn’t an abundance of options out there. However, I think I’ve found one of the best possible options out there in this ASUS Viviobook.

ASUS are pretty great for finding deals, as many of their laptops are cheap yet powerful enough to do a good job. This laptop has 4GB of RAM, which is enough for the large majority of people who will be using a laptop casually. It also has 64GB of storage and an AMD processor which work together to give you a good user experience.

Another positive about this laptop is that it actually comes with Microsoft Office installed, with a licence for an entire year. For those who know how much a Microsoft licence costs, you’ll be pleased and probably a little bit surprised to find out that it’s included in the price. It also uses the standard Windows 10 operating system, so you won’t get any surprises there.

It has a 14 inch 768 display, which you can’t really argue for at this low price. For those looking for the bets value for money, I’m pretty sure you won’t find anything better than this ASUS Vivobook.

For those looking for a simple every laptop, then it might be worth looking at the Lenovo Chromebook S345. It can do pretty much everything you would need it do quite easily, especially for people who want something lightweight and very easy to use.

This laptop has all of the ports that you’ll need – several USB ports, an audio jack, an SD reader and an audio jack should give you the ability to connect any of your devices. If not, then the Bluetooth capability will allow you to hook things up quite simply.

As well as these simple functionality, it also has all the necessary components of any decent laptop. 4GB of RAM is enough power to get things done, and combining this with the Chrome operating system makes for a seamless scrolling experience.

Although this is a cheap laptop, it actually feels like a more premium one with a slim design and a light 1.48KG weight. As well as this, the IPS display will give you a high-definition view of the screen. So all in all, this is one of the better choices if you’re looking for a low cost laptop for daily use. 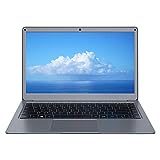 If you think that you might need a little bit more power, then it’s worth looking at a lesser known brand. A good choice for people who would like more than 4GB of RAM is this Jumper EZBook.

This 13 inch laptop has an extra 2GB of RAM in comparison to the other laptops mentioned, giving it a total of 6GB of RAM. This extra memory gives the laptop more ability to run higher intensity programs, or numerous programs at the same time. Along with the increased RAM, it has a 128GB of storage space, however this can easily be increased up to 1TB later down the line if you do need to.

It comes running on the Windows 10 operating system, which is what is probably best for the majority of people. And, it comes with a dual-core processor which will enable the laptop to deliver information quickly.

Whilst this laptop might have a little lower battery life (with the most being around 6-7 hours from a full charge), it does make up for this in other areas. Along with the impressive specs, it’s slim design and lightweight build make it a great option for anyone looking for a cheap laptop less than £200.

How much RAM do I need on my laptop?

Generally for most people, I try to advise that you probably want a minimum of 4GB of RAM on your laptop. Whilst there are still 2GB RAM laptops out there, they’re really going to struggle to run larger programs. For some people who like to have a lot of programs open on their laptop or use files that take up a lot of RAM, an 8GB laptop would be a better choice.

How much should I spend on a laptop?

Really, you should always spend as much as you can afford. If you’re only going to be using your laptop for writing documents and browsing the internet, then you can opt for a cheap one that is less than £200. The issue comes where you either need a lot of storage space, or you need something with more power. Then, you might need a more expensive laptop.

Does it matter if I leave my laptop plugged in all the time?

One of the most common concerns with leaving your laptop on charge all the time is that it’s going to deteriorate your battery in the long term. Fortunately, this actually isn’t too much of an issue, and it shouldn’t have any effect on the life of your laptops battery. However, it does have the potential to cause your laptop to overheat, which isn’t good and should be avoided when possible.

What size laptop should I opt for?

When you’re looking for a budget laptop, you might think you’d be restricted to a 10 inch screen or even smaller. But, you should still be able to get a 13 inch or 15 inch laptop for this price. The right answer is that everyone is different, and finds different screen sizes better for different things. If you aren’t sure, then starting with a 13 inch screen is standard for the majority of people.

Are cheap laptops any good?

A lot of people think that unless you’re willing to spend in excess of £1000 on a decent laptop, it isn’t worth getting one. Well, this isn’t necessarily true, and just because a laptop is expensive, it doesn’t guarantee that you won’t have problems with it later down the line. I’ll admit that most people will probably want to spend a little more than £200 if they can, but if you can’t and you have other priorities, then there’s no problems getting a cheap laptop.

For those looking for a super cheap laptop, I hope you can see that there are still options out there for you. Although many people might want to invest a little more than this, you don’t have to if you only want the basics.

Most people don’t need a super powerful laptop that can play games and has a ton of power – it can be overkill. So, if this is you, then getting a cheap £200 laptop might be the best idea. If you’ve picked up any bargains, then let me know in the comments below!

Hey, I'm Jon. I'm an engineer by trade, so it makes sense that I'm obsessed with anything technology related! Feel free to leave a comment if you want to get in touch!

Lenovo Thinkpad vs Ideapad – Which should you choose?