Lenovo Thinkpad vs Ideapad – Which should you choose in 2021?

August 25, 2021 by Jon | *As an Amazon Associate, we earn from qualifying purchases

The Thinkpad and the Ideapad are two of Lenovo’s bestselling models. This is no surprise, as they’re both competent laptops with a lot to offer. But for many people searching for a laptop, it can be very difficult to know the differences between the two.

With the Thinkpad being a stalwart of the laptop world since the 90s, the Ideapad range is a much newer design, and is little more than a decade old. But as we all know, newer doesn’t necessarily mean better.

So if you’re looking to find out the difference between the two series of laptops, then you’re in the right place. Let’s take a look at the two and see how they differ.

To explain the difference between the two quite simply, the Lenovo Thinkpad is designed with the business user in mind, whilst the Ideapad is made for the average everyday consumer.

Lenovo are one of the biggest selling brands in the world today. The Chinese company has gone from strength to strength, taking on the American giants in Dell and HP.

With their two strongest laptop series, it can be tough to know which is more suited to your needs. We’re going to start with the ever popular Thinkpad.

The Lenovo Thinkpad is the businessman’s laptop of choice – it’s ritually voted as the best laptop for those looking for something for work, and it’s one of the bestselling models too.

It’s not only popular in the business world – it’s also used by universities all across the world, as they offer great business deals to the education sector. This is one of the reasons I recommend looking for a refurb Thinkpad if you’re on a tight budget, as there is an abundance of them around!

Another interesting fact for younger people is that the Thinkpad was actually originally made by IBM, and it became one of their bestsellers back in the 90s! However, in 2005 Lenovo purchased the manufacturing rights for the Thinkpad, and it has been on a steady uphill trajectory ever since. Anyway, lets talk about the actual laptop itself.

The Thinkpad is intended to be a working laptop, with minimal focus on a pretty design and unnecessary features. Although there have been tablets and other models made, most people think of the standard X or T series when considering the Thinkpad. This basic, efficient design has proved popular amongst users, with many actually appreciating the minimalism of it.

It’s not all about the design with a laptop – the performance is the focus, especially for the Thinkpad series. With an extremely strong battery life, high quality RAM combined with Intel Processors, the Thinkpad has been voted as one of the best lines of laptop for its high performance, too.

The majority of Thinkpads come with 8GB of RAM, but you can easily upgrade this if you need to. That would be a good idea if you’re looking for a laptop to last you another 5+ years or more.

The Thinkpad tends to use a variety of different processors in their devices, with the higher quality more expensive models using Intel processors. For example, the X1 Carbon uses a minimum of an Intel core i5 processor, but it’s more likely to come with an i7 processor, which will make it even more powerful.

But, they do also use AMD processors in some more cost effective models as well. One example of this is the Thinkpad T14, which comes with a AMD Ryzen 7 PRO 4750U – this might sound cheaper, but it’s still a powerful 8 core processor.

These laptops are well known for their high quality displays, which many of the higher end models come with a fully 4K screen. This model tends to come in a 14 inch size in most variations of the Thinkpad, as they’ve managed to find the sweet spot between 13.3 inches and 15.6 inches. However, they do come in more traditional sizes too.

There are several different Lenovo Thinkpad series, and it can be difficult to know which one to choose and what the difference is. Here’s a quick guide on the basic differences between them.

Nowadays, when you talk about a Thinkpad, most people will look towards the X series. This is the Thinkpads highest quality series, and whilst they’re more expensive than most other models, they’re typically worth the cost. They often go head-to-head with the Macbook Pro in a competition for the best laptop of the year. 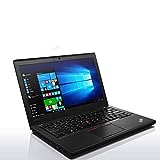 The Thinkpad X1 Carbon is the current model that is the most popular. It’s described as the lightest ultrabook out, and it’s available with up to 16GB of RAM (the Extreme version can go up to 64GB of RAM, but 95% of people won’t need anywhere near this).

If you’re looking for a laptop that has pretty much everything, then you’re going to want to consider the Thinkpad X1 Carbon. Although historically this is meant to be a business line of laptops, it’s great for pretty much anything. It’s a true rival to the Apple laptops and the XPS series.

The laptop is made with a high quality display, and it typically comes in a 14 inch screen size. It’ll come running Windows 10, and it will likely have an Intel i5 or an Intel Core i7 processor inside. As a business laptop they’re great for meetings, as the in-built 720p camera gives a clear picture.

Its thin design make is ideal for travelling with, and it uses the latest Intel processors. However, what’s probably most impressive about the X1 Carbon is the battery life, which can be in excess of 15 hours. So, this is probably Lenovo’s best Thinkpad currently available.

It isn’t just the X series that Lenovo currently has available – there are other series of Thinkpad out there that you may want to consider.

All in all, the Lenovo Thinkpad is probably the best business laptop in the world right now. If you’re looking for something for work or studying and you prefer to use a Windows OS over a MacOS, then this is the first place you should look.

Whilst the Thinkpad series has rightfully taken a lot of the limelight, the Ideapad is a great series of laptops in its own right. Where the Thinkpad is more targeted at business users, the Ideapad is targeted more at consumers. This makes it more similar to the Acer Aspire, which is another consumer focussed laptop.

In general, the Ideapad is much cheaper than the majority of Thinkpad models. This is because it’s not really aimed at the same target audience. It’s still a fantastic laptop in its own right, though.

It’s very easy to see the difference between the Thinkpad and the Ideapad just by looking at the two models. Whilst the Thinkpad sacrifices beauty in favour of power, the Ideapad is a much better looking laptop. It’s streamlined, slim and lightweight enough to be carried around for an entire day without it feeling like a chore.

Whilst the Ideapad is lighter and more aesthetically pleasing, it’s not as powerful as the Thinkpad and it typically comes with less RAM. Although this might sound like a bad thing, it’s still powerful enough for 80% of people to use without a problem. It’s only when using larger files that you might run into some hiccups with the Ideapad.

The Ideapad range uses a mixture of Intel and AMD processors across the board, with the AMD Ryzen 5 being the most used in the cheaper budget laptops. These laptops can be as low as a few hundred to buy, so it’s no surprise that they’re so cheap.

The Lenovo Ideapad display is generally pretty good, but it’s not as bright as the Thinkpad range, and likely to have a lower contrast ratio too. They’re by no means bad quality, but obviously in comparison to the premium Thinkpad range, they’re not quite in the same league.

Most of the Ideapad range use Lenovo’s connection with Dolby to hook them up with in-built Dolby quality speakers, which is much better than many other budget laptops on the market.

The S series of the Ideapad has been around for over a decade, and is what many people think of when they imagine what an Ideapad is. The Ideapad series in general are designed to be lightweight, with the S series being the best example of that. They manage to combine a decent battery life and specs with a modern, lightweight design which is impressive.

I should say that the S Series (and the Ideapad in general) is intended for more casual users, and it’s typically not going to be as powerful as the Thinkpad. So if you’re looking for something to use day to day, or you’re a student just typing up a ton of documents, then the Ideapad series might be for you.

Something that’s relatively new to the Ideapad line of laptops is the Ideapad Gaming 3 (it was fully announced back in April, 2020). It’s only been a matter of time before Lenovo wanted to get in on the gaming market, with the HP Omen series and the ASUS TUF series being so popular.

Whilst Lenovo have made a lot of high quality laptops over the years, this series of gaming laptops is targeted at those looking for a more cost effective solution. This is especially true when compared to brands like Alienware, which have the most expensive laptops for gamers on the market.

Even though the Gaming 3 series is relatively cheap, it still comes stacked with high quality i7 processors and Nvidia GTX graphics cards. It’s a bit early to say how successful it will be just yet, but we’ll keep our eyes peeled to see how well it does.

Whilst the Lenovo Thinkpad is definitely the better option for business and work use, many casual users have found it to be powerful enough for their needs too. In comparison to this, the Ideapad is better for everyday users who don’t need everything that the Thinkpad offers. If you only want to browse online, then the cheaper Ideapad would be a better choice.

10 thoughts on “Lenovo Thinkpad vs Ideapad – Which should you choose in 2021?”