January 18, 2023 by Jon | *As an Amazon Associate, we earn from qualifying purchases

If you’ve stumbled across some of your old cassettes, then you’re going to need a good cassette player to use with them. Or, maybe you’re just looking to take things back a bit and want to start using cassettes instead. Their retro style is what makes these tape players appealing to use.

And in a world of Spotify and Soundcloud, sometimes it can be a nice feeling to get away from the internet a little bit. A cassette player can definitely help with this – but which is the best cassette player out there? Well, here’s a few of the ones you’ll want to consider. 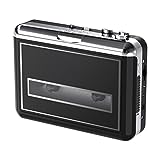 Though there are different options out there for you to choose from, they all tend to be very similar. However, one cassette player with a particularly good build quality is this Rybozen model. It’s made to last, so if you need something with a little resilience, then this is the right choice.

Although sturdy and long-lasting, this is a fairly lightweight cassette player, which makes it great for carrying around with you anywhere. It’s very simple to pop it out and get a new cassette tape in there when you want to listen to a new one.

It allows for simple enough volume control when you’re using it, and it has a fairly high volume if you have any quieter recordings on old cassette desks you need to listen to.

Another thing to mention with this model is that it gives you the capability to record off of your cassette takes and into mp3 files on your computer. So, if you’re looking for a way to get all of your old cassettes onto your laptop or phone, then this is the best way for you to do so. You can also use it to burn onto old CDs as well.

This is a small cassette player, but it definitely gets the job done, and it could be your gateway to the past. It plays well, and does everything you need it to, which is why it’s one of the best out there. 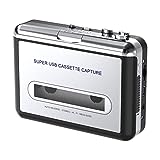 This is another portable style of cassette player that you can find all over the internet. It’s very popular, and there are different variations of it found made by different brands (it’s likely that it’s sourced quite cheaply and therefore easy to get hold of).

There’s nothing revolutionary about this tape deck, but it does do everything you need it to. It plays smoothly, and you can easily use the software provided if you want to get your cassettes onto another platform.

This portable tape deck is compatible with both Windows but also with Mac as well. This makes it really easy for you to get music from any of your old tapes onto your computer. So if you have a ton of ancient music recorded onto cassette tapes, then this could be a good way to get that music onto a modern way of playing it.

It also comes with some cheap headphones, though the likelihood is that you’re going to want to upgrade if you want decent audio quality. It’s very lightweight, which makes it a great choice if you want something you can listen to when you’re on the go.

As mentioned, this is a pretty cheap cassette player, so it’s not going to be as good quality as some other options out there. But, it is a reasonable price too, so if you’re looking for a cheap way to listen to your old cassette tapes, then this is probably the best way for you to do so.

Whilst most people will be looking for a typical cassette player, you could also consider going for this full stereo with cassette playing capabilities. If you want to listen to your cassettes with other people, then this boombox is the best way to do so.

Available in a variety of different styles, this is a classic stereo that will bring back nostalgia for many of us who has these in the 90s and even into the 2000s as well. Whilst it doesn’t have all the compatibility of a modern version (Bluetooth etc), that’s probably not what you’re going to be looking for anyway.

The audio quality is pretty impressive, and much better than I remember these stereos actually being, so there’s definitely been some improvements here. It’s very simple and straightforward to use, so it might be the perfect choice if you’re looking for something for a senior to use.

As well as being a cassette player, it’s also usable as both a CD player and as a radio too. Having an inbuilt FM radio is a definite bonus, as you’ll have something to play when you can’t find anything to put into your tape deck.

It also has an aux connection if you do want to connect to it with another device. So overall, this is a great option if you have a ton of old cassettes you want to listen to with the family. Obviously, it’s not suitable if you’re only interested in portable cassette players. 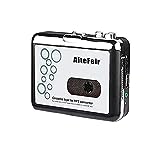 Another small classic cassette player, this can likely provide exactly what you’ve been looking for. Like most of these smaller cassette players, it has the ability to play cassettes, but it can also be used to record them if you want to save them too. This is very simple and straightforward to do.

For those looking for a standalone portable player, then this could be a great choice. It has a pretty stylish retro design, although it is quite cheaply made, so bear that in mind before you decide on it. The casing is not as solid as other models out there, although folks using it at home won’t need to worry about this.

By using the aux port in the cassette player, you can very easily connect this model to your headphones. Or, you can actually connect it to your car by doing this if you want to as well, which might make some long journeys a little more fun by listening to old cassettes.

It has an auto reverse function, which will rewind the tape deck back to the beginning when you’re finished with it. It uses simple AA batteries, though they aren’t included with it. Either way, this is definitely another viable option if you want a cheap cassette player. 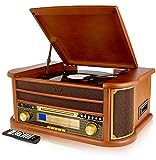 If you’re looking to take things to another level of old fashioned, then you could consider going all out and getting a full on record player. This one has the ability to play vinyls very easily, and of course, it has a built in cassette player too.

Although it has an old classic style, this actually has a lot of functionality. As well as playing cassettes and vinyls, you can also use it for CDs, the USB port and it also has an AUX connection point as well.

Another good thing about this model is that it makes recording to mp3 super simple, as you can very easily connect it a USB drive. It also has a useful remote control which can be used to turn it on and off when you need to. With an RCA outport port, you can connect it to a larger set of speakers if you wish.

But for most, that won’t be necessary. The most noticeable thing about this model is that the sound quality is particularly impressive. It is the perfect choice if you want to kick back and listen to your old cassette tapes clearly. Obviously this isn’t a suitable choice if you’re looking for something that can run on batteries.

This is the perfect option if you’re a bit older and don’t want to compromise to the world of music streaming. However, it’s also a good choice for those who happily use Spotify during the day when they’re out and about, but in the evening, would like to relax to vinyls and old cassettes.

Are cassette players making a comeback?

Although the likelihood of them other coming back to be used for practicality is slim, there’s actually a decent market for these handy little portable cassette players nowadays. With them being heavily used throughout the 70s, 80s and 90s, nowadays a lot of younger folk are wanting to bring back the same nostalgia that our parents had.

Can cassette tapes be transferred to CD?

It’s actually pretty easy and straightforward if you want to get all of your cassette recordings onto your laptops or a CD, as you can use one of these players to record the files as an mp3 on your computer. Then, you’ll be able to do whatever you want with them, including burning them onto a CD if needs be.

Can cassette tapes be recycled?

Can I still buy cassette tapes?

What has developed into a niche industry, cassette tapes are still actually available if you want to buy them. Though they are definitely becoming more difficult to find, you can still purchase them and use them as normal.

Are cassettes worth anything?

Make sure that you check your cassettes before you throw them out, as some of them might have become rare and therefore pretty valuable. If it’s just a standard cassette tape, then it’s unlikely that it’s going to hold any value. But, it’s always worth checking online just incase you do have a fairly rare cassette tape at home.

Whether you’re looking for a simple personal tape player or you’d like a tape recorder to get all of your old songs onto your laptop, they’re fairly cheap and worth picking up.

It’s difficult to believe how much music has changed over the last few years, but if you want to take it back to basics, then a cassette player is a good idea for this.

What is an AC adapter?

Apple Mail not working? Try these steps to fix