June 16, 2021 by Jon | *As an Amazon Associate, we earn from qualifying purchases

A good tablet can be the perfect addition to your household. We all have needs that lie somewhere between a big, chunky laptop and a small phone screen, and a tablet is the perfect resolution to those needs.

They’re the perfect evening device, sitting back and browsing the latest catalogues or news, or even tuning into your favourite shows. But if you’re looking for a good tablet, can you get one that isn’t going to destroy your bank balance?

Well, thankfully there are cheap and budget friendly tablets out less that you can purchase for less than £150. Let’s take a look at some of the best budget tablets that you can currently get your hands on. 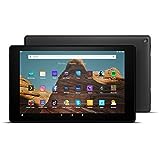 If you’re looking for the best budget tablet available, then I’d advise that you check out the Amazon Fire range.

They’re Amazon’s answer to both Samsung and Apple, and they’re some of the best reasonably priced tablets around. And out of these, the one that provides the best value for money is the Fire HD 10.

As you’ve probably guessed from its name, this tablet has a good quality display that’s ideal for playing games or watching Netflix on. You can easily set it up with your Amazon Alexa too, so you can control your devices from your Fire.

One of the most impressive things about the Fire HD 10 is the battery life. You can go through days of scrolling without having to recharge it, and it can last for 12 hours of constant use. Whilst the storage of the device might seem a bit stingy (it only comes with 32GB of storage), you can easily add to this with a Micro SD card.

This is Amazon largest display tablet, and it’s probably their best too. It runs faster than the previous Fire models, and it works on both wifi bands so you’ll be able to get a good connection. It also has a 2MP camera on the front and back of the tablet, making it the perfect option for selfies.

So overall, for those looking for a cheaper tablet that you can purchase on a budget, then the Amazon Fire HD 10 is going to be worth every penny. With a 1080p display, decent processor and a solid operating system, there’s not much wrong with it.

Costs more to buy without ads
A little heavy

Verdict: This is probably the best cheap tablet you’ll find. The big screen and easy navigation make it difficult to beat. 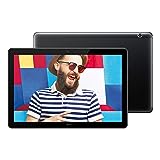 Although the Amazon Fire series has become increasingly popular in recent years, there are still some great Android alternatives out there.

One of these is the Huawei Mediapad T5, which has been around for a while. It actually has increase power in comparison to the Fire, and gives you 3GB of RAM instead of only 2GB. This extra little bit of power does make a big difference when it comes to running several programs at once.

The Mediapad T5 also has a ton of other good features to consider. It uses an Nvidia chipset, which helps to give it a vibrant and colourful display. It has inbuilt dual speakers, and it even has a kids mode, making it the perfect cheap family tablet.

As well as this, it also has a 5MP camera on the back of the device, and a 2MP camera on the front. This makes it ideal if you have a lot of video calls to make. All of this is fitted into a slimline metal tablet design, which is quite impressive when you consider its functionality.

The only downside of this tablet in comparison to the Fire series is that it doesn’t quite have the same amount of battery life. Whereas the Fire may last up to 11-12 hours of constant use, this model will likely be a bit less than that (between 9 and 10 hours).

So, if you’re willing to sacrifice a little bit of battery life for some extra RAM and power, then the Huawei T5 is a great choice.

Verdict: This is probably my favourite option if you want to steer clear of the Amazon Fire range.

Whilst most of the Samsung tablet range are off limits if you’re looking for a bargain, there are some variations of the tab that you can pick up for a good price. Most will recommend the Galaxy Tab A 10, though personally I prefer the A8.

If you’re looking for a tablet with a long battery life, then this is tablet will suit. It has a nice 8 inch display, which is the perfect size for many people, whether you want to watch movies or play games on it. For the size, it’s actually very light, as it’s only around 350 grams in weight.

In an ideal world we’d have more than 2GB of RAM, but this isn’t always possible on a low budget. If you need more than the 32GB of storage, then it has a micro SD card slot that you can take advantage of too.

This tablet has two cameras, with a 2mp front camera and an 8mp rear camera which give you the ability to take good photos. This model has good connectivity as well, which means that it’s super easy for you to connect to the wifi in your house.

So overall, if you’re looking for a tablet at a low price with a HD display, then considering the Galaxy Tab A8 would definitely be a good idea. It’s a competent tablet that’s a great choice if you want something reliable you can use every day.

Not that responsive
Many prefer previous version

Verdict: Another alternative to the Fire series, the A8 is one of Samsung’s budget line that performs well. Whilst not quite on par with the rest of the Galaxy Tab range, it still does enough to be a viable option. 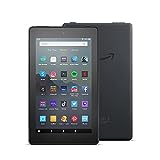 If you’re looking to spent no more than £60 or £70, then you can still find a decent tablet for this amount. Within this sort of price range, the best option out there for you is going to be the Fire 7. It’s the little brother of the Fire 8, and aside from the screen size difference, there isn’t much between the two.

Unlike the Fire 10 and 8, this model has 1GB of power and less storage space than the larger models. This will be pretty noticeable when you’re using the tablet, but it’s much cheaper in comparison.

It also has dual cameras, with the front facing camera being 720p and rear camera being 2MP. It’s easy to set up with your in-house Alexa too, which should be expected with the Amazon Fire 7.

It has an average battery life, and although the 16GB of storage isn’t great, you can easily upgrade this to 1TB of space with the right Micro SD card. It also has a special game mode, which is perfect for any Minion Rush addicts.

All in all, whilst I do prefer the Fire HD 10, there’s certainly nothing wrong with opting for a cheaper, smaller option. If you don’t need the 10 inch screen the Fire 10 offers, then the Fire 7 is a great cheaper alternative.

Verdict: Though it is still fairly underpowered in comparison to the rest of the list, it’s the best tablet you’re going to find for £50. 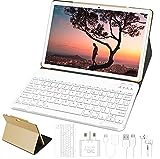 For some, a 2GB tablet might not be enough. Whilst this is the right size for scrolling and streaming, you will likely get a smoother experience with a higher powered tablet. There aren’t many 4GB tablets less than £150, but one of them is this Goodtel tablet, which provides excellent value for money.

This tablet is a better choice for those who might need to make the occasional change to a Word document, as its extra power mean that it’s easy to use with Microsoft applications. Saying this, it’s still great for browsing YouTube and Netflix too, but this is just an added dimension to this tablet.

Another impressive feature of this tablet is its dual cameras, which are 5 and 8 MP – much better quality than the other tablets we’ve mentioned. Combining this with the large 10 inch IPS display that produces a good quality picture, and there’s little not to like about this budget Android tablet.

So, it does have a lower giga hertz processor, but that isn’t going to make much difference in this case. If you’re looking for a higher powered yet still cheap tablet, then you might need to avoid big brand names like Apple and opt for something like this Goodtel Android tablet.

Verdict: You can get good value by avoiding the major brands. This Goodtel tablet is a prime example of that.

Are cheap tablets worth buying?

What should I look for when buying a tablet?

When you’re looking for a tablet, the main things that you should consider are its size, but also its power too. This is indicated by the RAM that the tablet has, much the same as a laptop. The more RAM that your tablet has, the more power that it has and the better it will run. You’ll also want to opt for a tablet with a good battery life, with a reliable and long lasting build quality too.

What is the best size for a tablet?

Many people aren’t sure on the best size for their tablet. Although there are a lot of smaller tablets out there, many of them are little bigger than your phone. In most cases, an 8 inch tablet is good for browsing, but many want at least 10 inches if you’re going to be watching videos. It really comes down to personal preference, which some people even preferring 7 inch tablet.

What is the lifespan of a tablet?

If you’re wondering how long your tablet will last, then again it’s difficult to say. More expensive tablets like iPad can last in excess of 5 years. However with cheaper tablets, I’d say that a life span of around 3-4 years is what you can expect before the hardware is outdated. This is why it’s a pretty good idea to opt for a budget tablet, because many of them will be outdated within the coming years anyway.

Is 32GB enough for a tablet?

This really depends on what you’re going to use the tablet for. If you’re planning to download a ton of games, then 32GB might not be enough. But if your main activities consist of browsing and streaming, then a 32GB should be fine. If you’re concerned that it might not be enough storage for you, then you can always look at upgrading and getting a 64GB tablet instead.

All in all, if you’re just looking for a reasonably cheap tablet that you can browse the internet, check the your emails and maybe watch the occasional YouTube video, you don’t need to spend a fortune.

There are plenty of low cost tablets to choose from on the market too. Although iPads are great, not everyone needs one, and for some people they would be overkill.

So for casual users, you can find a cheap tablet at less than £150 that should be able to do everything you need it to. Whilst they may not be powerful enough to be a business, work or student tablet, they should be enough for daily use.

How to fix a Samsung tablet that’s not charging