August 25, 2021 by Jon | *As an Amazon Associate, we earn from qualifying purchases

When you’re looking at higher end mouses, then often people will look to brands like Logitech as having the best options. Amongst the range of mice that Logitech offer, the MX Master series is probably the best that they have released.

Whilst the older MX Master is still available, there are various newer models that you can pick up which have been released over the last few years. This included the MX Master 2s and more recently, the MX Master 3 as well.

If we then compare the MX Master 2s to the MX Master 3, then the key difference here is the improved scroll wheel on the side of the mouse, which is much better.

It also moves the side buttons down slightly on the side of your mouse too. This makes it much easier to use with your thumb, and is another definite improvement. It’s only a few grams lighter than the 2s, but when it comes to wireless mice, this can be pretty significant.

These subtle differences do make a difference when you’re using your mouse on a regular basis. Let’s break things down even more so you can decide on the right one for your computer or laptop.

Although this is the original release of the MX Master series, it actually isn’t that old. It was only released back in 2015. This is one of the main reasons why the mouse is still available now, as it’s still relatively new and definitely a pretty good option. 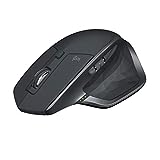 This whole range is actually fairly heavy for a mouse, with the MX Master coming in at 145g. Whilst in some cases this would be perceived as a negative, it’s actually not a bad thing with this mouse, and it feels balanced throughout.

Out of these three mice, nowadays it’s going to be the cheapest of the lot, and sometimes you can find it available for a really decent price during sales. This means that if you’re looking for one of the lowest costing high end Logitech options, this is probably going to be it.

To be honest, this is going to be a major factor in this decision. If it’s only a bit cheaper than the other two, then it’s probably worth skipping it. But if you can find it for half the price, then it’s going to be a pretty safe purchase.

Design – The weighty design of the MX Master proved to be very popular with users. It has a stylish curved design, and it uses a curved ergonomic design to fit into your palm (right handers only, I’m afraid).
Buttons/Wheels – There are seven different buttons on this model, with 5 of them being programmable. It’s well known for its secondary scrolling wheel on the side of the mouse, which can be used with the thumb to scroll sideways. This is perfect for designers and those who use Excel a lot.
Connectivity – You can connect to the MX Master via a Bluetooth connection, with it being one of the most popular wireless mice out there.
Performance – Overall, it’s fair to say that this was already selling extremely well, both in comparison to other Logitech mice but also amongst the competitors too. This is because the mouse does exactly as it sets out to – it’s the perfect mouse to use for most things. Comfortable grip and a good build quality are its main features. But, the newer models have improved on this model in certain areas.

Fast forward a few years and although the MX Master was doing just fine, there were a few improvements that Logitech wanted to make to the mouse. So, they introduced the 2s version of the mouse in 2017.

Much about the mouse itself was the same – it has the same weight as the original, and the same ergonomic style design as well. They have introduced a few new colorways with the 2s though, so you might be able to pick it up in a different colour if you want to.

Differences to the Original

Battery – Although this is an area which most users aren’t too fussed about improving, it always seems to be something that Logitech focus one. Overall, it has around a 75% better battery life than the original. However, the originals battery life is still perfectly acceptable.
DPI – Another thing that Logitech decided to do with the 2s is that they increased the sensitivity capabilities of the mouse, increasing its DPI up from 1600 all the way to 4000. For the average users, this isn’t going to make much of a difference.
Laser Sensor – Finally, Logitech also decided to improve the sensor on the mouse itself, so it should work a little more smoothly than the original version.
Logitech Flow – Although it sounds like it’s something amazing and super cool, Flow is just the ability to use the mouse across different computers or laptops smoothly – for example, you can copy and paste on other, which is pretty cool in all fairness.

Now, the MX Master 3 actually isn’t that much different to the 2s. However, there is one significant difference between them which many people think makes it worth the increased price. This was a change to the scroll wheels on the side of the mouse.

Essentially, Logitech must have heard that people loved the mouse for the side-scrolling wheel on the side. They therefore made the scroll wheel much better on this version, with it being more responsive and faster than it was before. 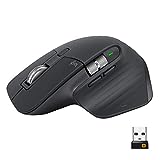 This is a pretty great mouse that has everything that most people could need from a mouse (it’s probably the best Logitech mouse out there).

Differences to the 2s

Scroll Wheel – As I mentioned, the scroll wheel on this model is much better than it was before. They made it faster than it previous was, and it’s more precise too.
Smarter – This mouse is smarter than its predecessor. What do I mean by this? Well, the buttons on top of the mouse will automatically know what to do in certain popular applications, so when you open the app, you’ll have easier shortcuts.
Sensor – Another thing that I’ve seen Logitech post is that the sensor is again improved on the previous models, but there’s not much of a difference there to be honest.

As well as these differences, you also get a few more options when it comes to customizing the the MX Master 3 too. Whilst they do offer a very similar user experience, it’s marginally better than the 2s. None of the three are going to be a good choice for gaming, though.

All in all, there’s no doubting in my mind that the Logitech MX Master 3 is the best mouse of the three – it has the best of pretty much everything, with improvements made to the scroll wheel, which attracts a lot of people to the mouse in the first place.

However, it is pretty expensive, so if you can find either of the other two models at a significantly cheaper price, then it might be worth opting for one of those instead. If you need an even cheaper mouse, then check out the G502 series.

Logitech G502 Hero vs G502 Proteus Spectrum – Which should you choose?

Razer Synapse not opening? Try this to launch the software