Logitech vs Razer – What are the differences?

August 25, 2021 by Alex | *As an Amazon Associate, we earn from qualifying purchases

When it comes to getting the right wireless mouse, the two brands it often comes down to is Logitech and Razer. Both companies make quality products, but they have some key differences that make one mouse better for some than others.

Logitech and Razer both make a wide variety of devices. Which one is the right one for you or best is ultimately going to depend on individual models of a mouse. However, when you’re looking for the best mouse for you, you can narrow your options down a bit.

Each brand excels at different aspects of making a great mouse. If you want to find the better mouse for you, you need to find which of these companies produces mice that actually suit your needs.

We’ve broken down what you should be looking for in a mouse and what Logitech and Razer do differently, so you can figure out who comes out ahead in Logitech v Razer, and who makes the better mouse.

The difference between Logitech and Razer is that whilst Razer specialize in high quality gaming mice, Logitech sell a range of different mouse options. Razer mice tend to have more buttons, whilst Logitech mice are more streamlined, though still pretty high in quality.

However, this is quite a basic comparison, and it doesn’t really get into any detail. We’ll need to take a look at both Logitech and Razer closer if you want to know who makes the better wireless mouse.

What Makes a Great Mouse?

When you’re looking for the best mouse out of Logitech and Razer, you’ve got to think about what you need. Mice have a lot more going on inside of them than just tracking movement and clicking. This is what you need to look for and know about the mice available at the moment:

Logitech makes a great variety of mice, so they have options that have different features. However, on the whole, they excel in a few areas. There are certain aspects of a mouse that Logitech do better than Razer.

When it comes to customisation, Logitech falls behind the competition bit. Setting up a profile for custom mouse bindings on a Logitech Mice is often difficult since it is applied overall to your mouse, rather than being easily restricted to a limited amount of applications.

This is quite helpful if you’re using the buttons as general keyboard shortcuts. Using a button for cut or paste can save you a lot of time, but for gaming, it can be a bit of a problem.

Responsiveness is going to vary depending on which model you have, but the majority of Logitech mice available have a decent DPI. They aren’t as specifically gamer orientated as Razer, but mice with a high DPI are available.

Logitech mice can also come in at a lower price point than their equivalents from Razer. This is a factor that needs to be considered.

On the whole Logitech mice are great for general use, and they can be configured to work well for gaming too. However, their lower price point does make them pretty good value, so you’re getting quite a lot for your money.

For those looking for the ultimate Logitech gaming mouse, then the Logitech G Pro must be one of the best out there right now. It has a massive 16,000 dpi, making it one of the most sensitive gaming mice available.

This mouse is specially designed for professionals, so it’s pretty expensive. But if you’re looking for a mouse with a long battery life and a super high build quality, then the G Pro is one of the best.

The are different variations of the G502 out there for you to choose from. This model is the G502 Hero, which is a wired gaming mouse made for those looking to make a step up in terms of quality.

It has the same high DPI as the G Pro, and it also has 11 programmable buttons on the sides of the mouse too. It also has RBG lighting on the side, which you can easily sync to your gaming computer. It’s another impressive Logitech mouse, and it’s not one to ignore.

They provide better value for money, especially if you opt for a Logitech gaming mouse.
Logitech mice are very responsive, and have a good build quality.
For those looking for a normal mouse for general use, you can customize a Logitech mouse quite easily.

The mice that are produced by Razer are similar to those from Logitech, but with some key differences.

When it comes to responsiveness and DPI, you can find a similar level to that from Logitech, but typically at a higher price point for the same DPI. Both offer mice that go up to 1600 DPI for a fairly good price, but Razer tends to be more expensive.

In terms of customisation for specific games or programs, this is easier with Razer. You can easily create custom profiles that suit specific applications. This makes it a whole lot more convenient than using a Logitech. However, this factor only really applies to this one element of customisation.

Razer offers quite a lot of different options in terms of aesthetics. Their mice are available in pretty diverse styles. If this is the kind of aesthetic you’re looking for, then Razer is definitely a better choice.

They make great mice that suit a whole gaming PC set-up and can make a big difference. However, a Razer mouse can be overkill for a basic office PC. 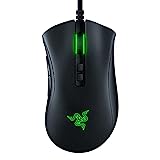 The Razer Deathadder has been one of the bestselling gaming mice on the market for years and years now, and they’re different variations of the mouse too. This 2nnd version of the Deathadder has a dpi of up to 20,000, which is particularly impressive.

The mouse is designed with ergonomics in mind, and if you want to game comfortably one your computer, then this would be a great way to do so. The wired connection makes the clicks in almost real time, and it’s a perfect mouse for any gamer.

For those looking for something a little cheaper, then you could consider the Razer Viper. It’s perfect for both left and right handed gamers with its neutral design, and it weights little more than 60 grams.

You can easily customize the lighting on your mouse too via Razer Synapse, which is Razer’s software. So, all in all this is a perfect budget gaming mouse from Razer.

Razer have a wide variety of different options for gamers to choose from.
If you want to customize your mouse, then Razer have a lot of different ways you can do this with their high end models.
Razer mice have a good software for button mapping, meaning you can easily assign different buttons.

The main downside of a Razer mouse is that they tend to be pretty expensive, and you might be able to find a cheaper deal with Logitech.
For some people, they’ll prefer the simple design of the Logitech mouse more than a Razor.

Logitech and Razer both offer a great variety of options in terms of their mice. However, they definitely appeal to different markets. Both companies make mice that can be very accurate and responsive.

With both manufacturers, you can find mice that have a great DPI that is adjustable. But you can also find mice that aren’t too great in terms of response, it essentially comes down to what level of responsiveness you choose in a model from each.

Logitech mice offer a good level of customisation in terms of remapping buttons, but their software can become a hassle. You’ll struggle to set application-specific binds for your mouse without having them interfere with what you use in other applications.

If you’re happy to use these features for a standardized set of shortcuts, then this isn’t a problem. You also don’t have as many aesthetic options. However, this isn’t always a flaw. If you’re looking for something that gets the job done and comes in at a decent price, then these are a great choice.

Razer makes a great mouse, and often one that’s pretty visually distinctive. You are paying a premium for this though. Compared with Logitech, their mice cost more because of how they look. Whether this is a pro or a con comes down to what you’re looking for. They also offer better options for customising the shortcuts on your mouse.

Gaming Mouse vs Normal Mouse | Which is the better choice?