December 22, 2022 by Steve | *As an Amazon Associate, we earn from qualifying purchases

There are a ton of different options available if you’re looking at new wireless keyboards. One of the better known models is the Logitech MX Keys, which was released at the back end of 2019.

It’s a mid-priced option from Logitech, and the brand have many cheaper options on the market, plus a couple of more expensive keyboard available too (like the Logitech Craft). Though the layout of the keyboard is fairly basic, it’s one of the higher-end membrane keyboards you can buy.

Often matched up with the MX Master mouse series, the MX Keys has been pretty well received. We’re going to take a quick look at the MX Keys to find out whether it’s worth it’s fairly high price.

Overall, the Logitech MX Keys is one of the better keyboards available right now. It’s got a high build quality at a lower price than the older Craft, and although the layout is simple, most people will find it comfortable for daily typing.

It is probably best known for being one of the only external keyboards that has backlit keys. Many other high end models don’t have this to help save battery power, but it’s been added into this keyboard for evening and late night typing sessions. 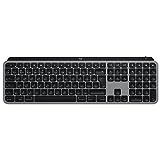 Though some people don’t like the Logitech software it uses, once you play around with it you should be able to customize your devices to your needs. You can easily set up shortcuts, which can come in handy for quick navigation. Let’s look at the overall build and function of this keyboard.

When compared to the Magic keyboard (as it often is), it’s a little different in terms of the specifics. It has a greater key travel distance – the Apple keyboard has a 1mm travel, whereas with the MX keys it’s around 1.8mm. This may not seem like much, but it does make a difference when you’re typing.

The style of the keyboard is quite similar to that of a laptop. So if you’re making the transition from a full time laptop user, this may prove to be a useful stepping stone. The spherically indented keys are great and help to make typing that little bit more comfortable.

Though it may look like it has a chrome or metal finish, it’s just made with a high quality and durable plastic. Aesthetically it’s extremely attractive when compared to other cheaper models, and it definitely looks like it’s fairly expensive (which it is).

You may also want to pick up the MX Palm rest if you’re trying to get a comfortable typing experience for your wrists. Having a wrist rest is pretty much essential for all types of office work.

When typing, the increase in travel does make it good for those that don’t really like shallow keys. It uses a scissor-switch mechanism which works extremely well and helps to keep typing noise down to a minimum.

The battery life is pretty exceptional with this keyboard. It’ll easily last for 3-4 months without you needing to worry about recharging it. However, this is only when you’ve got the backlight turned off. If it’s on, then you’re going to get nowhere near this kind of life from a full charge unfortunately.

For best performance, you’re going to want to use the MX Keys with the Logitech palm rest too. It’s actually not that much extra on top, though when the keyboard is a high price already, you may not want to pay out any more than this.

You can sometimes see this referred to as the MX Keys Pro, which is just the normal keyboard with an additional rest. It’s definitely an accurate and well made keyboard, and it provide a good typing experience (which is the main thing really).

All in all, it performs very well as you’d expect from a keyboard of its stature and reputation. Plus, if you set it up with the Logitech Flow software, then you can use it across multiple different devices.

The main thing that stands out about the Logitech MX Keys is the build quality. You can tell just by using it that it’s a well made piece of equipment, with sturdy grips on the bottom that help to keep it in place.
With a slight depression in each of the keys, this seems like a small adjustment. But you’ll definitely notice it when you’re typing, especially if you type at a fast speed.
With the Logitech Options software, you can use the MX Keys with three different devices if you want to. So, you can easily switch between them with your keyboard and mouse. Though the software may seem complex at first, it’s worth taking some time to set it all up properly.

The Logitech MX Keys is a pretty competent keyboard, but you do pay a price for it. It’s more expensive than the Magic keyboard 2, which is already considered to be fairly costly. You may find the MX Keys on sale sometimes, which can help to make the deal a little sweeter.
The backlit keys are great for an external keyboard, but they have a dramatic effect on the battery life of the keyboard. It goes from lasting a few months to just a few weeks with backlighting on, which just makes you want to keep it off at all times.

Aside from these two points, there aren’t many faults with this keyboard. Sure, there will be those that think that it’s quite large for an office keyboard, but this is always going to be the case if you have a numberpad. You can look at tenkeyless keyboards if you want a smaller option.

So, if they could extend the battery life in the future, that’d help to improve this keyboard and make it a little better. We’ll also quickly look at another variation of the MX Keys.

There’s also an additional version of the MX Keys that’s specifically designed to work with Apple software and the Mac operating system. They also updated their MX Master 3 mouse to match, and that also works seamlessly with the Mac OS.

There isn’t a whole host of differences between the two. In terms of appearance, the Mac version of these two peripherals are a slightly greyer colour, designed to match up with the Space Grey colour the Macbook is well known for.

The keys on the front are very similar but slightly altered as well. They just make the Command and Option key more usable for the Mac, as they’re the most used keys on those devices.

Obviously, they’ll come out of the box ready for setup with an Apple device. This extra convenience means that they’re a no-brainer if you’re looking for something to work seamlessly with your Macbook.

In conclusion, this is one of the best options out if you’re looking for a daily typing keyboard that isn’t mechanical. The keys have a good form factor with minimal resistance, and it’s an ideal keyboard if you’re looking to increase your productivity.

The only potential snag is going to be the price, which may rule out some purchasers. But aside from an extended battery life when using the backlit keys, I don’t think there’s much more you could ask for from a keyboard.