May 3, 2021 by Nathan | *As an Amazon Associate, we earn from qualifying purchases

When it comes to peripherals, a vertical mouse is definitely an acquired taste. They can definitely make your overall experience more comfortable, but the compromise is that you’ll have less cursor accuracy.

For some people, the trade-off is worth it. Unless you’re gaming or completely a specific task, a traditional mouse probably isn’t necessary, and something more ergonomic could be beneficial. And if you’re looking for a reliable vertical mouse, then one of the first ones that you’ll come across is the Logitech MX Vertical.

It’s pretty well known as maybe the most popular on the current market, and is considered by many to be the best vertical mouse. So, we’re going to see whether that’s true, and whether it’s one of the ergonomic mice you should look at picking up, or avoid altogether. 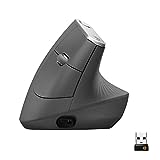 In short, I’d definitely recommend trying out the Logitech MX Vertical if you want to make the switch from a standard mouse. Above everything else it’s extremely comfortable, and after an initial familiarisation period, you won’t want to use anything else.

No, seriously – it can make using other mice feel strange and a bit of a chore. But although there’s not a great deal of scientific evidence to back them, vertical mice are supposedly better for your hands and posture if you’re using a computer long term.

An ergonomic mouse can help you to maintain a natural grip, as well as putting the mouse buttons in more comfortable places for you. If you’re worried about getting carpal tunnel syndrome, then this style of mouse can help prevent that. The first thing that we’ll look at is build quality, Then, we’ll take a quick look at the performance of the Logitech MX Vertical.

Most people look to a vertical mouse because they’re having problems with their wrist or hands, or they’re worried they’re going to. The MX Vertical is a pretty typical example of a vertical mouse that’s designed to put your hand into a handshake position as opposed to a classic claw or palm grip mouse.

It’s made at a 57° angle, with the slight tilt to one side making it comfortable and potentially a more natural position for your hand to be in. On the top of the mouse, it has the left and right button with a scroll wheel in the centre for easy access.

At the other side of the mouse, it has a textured area for your thumb to sit. You can also easily reach up with your thumb and press the cursor speed switch or sensitivity changer, which can prove useful if you switch between activities (from gaming to editing, for example).

The size of this mouse really makes it most suited to those with average to large hands. It’s going to be a little bit too large if you have smaller palms, as it has a large surface area that you’ll want to cover. It’s going to be too large to be really suitable as a portable option.

Like any vertical mouse, it’s going to feel a bit odd using it at first. But, you just need to give yourself some time to get used to it before really judging it. After using it for a good while, then you can truly say whether it’s right for you or not.

Something that I do really like about the MX Vertical that many other similar options don’t do well is working with the Mac OS. Many similar mice work very well with Windows, but struggle with connectivity when it comes to Mac. That isn’t the case with this mouse, as it works well with both.

Whilst it does come with a small USB receiver that you can use with it, most people won’t need to. You can set it up and use the mouse with your computer or laptop directly without much hassle using Bluetooth, which should work without much hassle.

Personally I really like Logitech Options software, as it’s pretty responsive. When it comes to software that you’ll use with a mouse, it’s important you have one that’s simple to navigate. It allows you to easily see the different choices you have with customizing the mouse itself, from changing the sensitivity of your mouse cursor to re-arranging your buttons.

You can also use options to enabled Logitech Flow too. This allows you to use multiple computers seamlessly together with your mouse without having to worry about transferring files. When you set it up with the software, you can just drag and drop from monitor to monitor.

Overall, it’s a great mouse to go for if you’re looking to try going vertical for the first time. Let’s break down the main positives and negatives of the mouse.

The main thing that you’re going to notice when using the MX Vertical is how comfortable it is. Sure, there’s going to take a little time for you to adjust to using it. But after you’ve used it for a few weeks, you’re going to notice just how well designed it is.
The long battery life is pretty outstanding when you compare it to other similar mice out there. One full charge should last you as long a 4 full months of moderate usage. This means that you’ll barely need to charge it, which is a plus for any mouse.
Although there’s only a few different buttons for you to use on the MX Vertical, they’re all positioned very well. Having a standard left and right mouse button with a scroll wheel between works well, with the additional cursor speed changer coming in handy too.

The biggest downside of the MX vertical is definitely its high price tag. Though it’s a strong mouse in most areas, it does come at a significantly increase price compared to many other verticals. Some may argue that you’re not getting a whole lot more for the extra cash.
The MX range in general is known for being pretty high quality and functional – the MX Master and MX Anywhere series are both great mice. But the Master has an additional scroll wheel on the inside for your thumb to use. It’d be nice if the MX Vertical has something similar too.

So in conclusion, there’s no doubting that the Logitech MX Vertical is one of the top options out there if you like this style of mouse. It connects well with your laptop no matter the operating system, and it’s extremely comfortable for all day use.

However, this market isn’t exactly inundated with alternatives. Whilst it’s better than cheap Anker mice, there’s really no competition for the MX Vertical. Whilst it remains the best for now, there’s a few improvements we’d like to see to future versions.

5 reasons why your HP laptop won’t shut down