A detachable laptop really gives us the best of both worlds. You can get your work done throughout the daytime, and in the evening, you can detach your laptop and just use its screen to browse the internet, watch Netflix or whatever else you want to do.

It essentially gets rid of the need for a separate tablet and laptop, so for many people, they’re a good idea to invest in. You might have also heard detachable laptops referred to as 2-in-1 laptops, or even convertible laptops – this really depends on their manufacturer.

Different brands of laptop will have their own name for this style. However, these laptops are not always “detachable”, and may only have the ability to flip the keyboard back behind the screen.

So which detachable laptops are worth looking at, and which of them aren’t really up to scratch? Well, we’re going to take a look at some of the best options available now.

When you’re talking about detachable laptops, one of the first models that springs to mind is the Microsoft Surface Pro. With the Surface Pro 7 being released more recently, it’s a definite improvement on previous models.

This model comes with more than enough power for most casual users, combining an 15 processor with 8GB of RAM. It also has 128GB of storage space, which isn’t a great deal, but it should be enough for the average user.

As well as this, it has an impressively long battery life, so if you’re tired of your device running out in the evenings, then this should last you a full day. It’s the perfect model for artists, as you can also pick up the Surface pen, which can give you the ability to draw and write on its touchscreen.

Although some touchscreens aren’t of the best quality, this is well designed and also resilient enough that you don’t need to worry about damaging it. It’s also responsive enough for drawing on, too. The Surface Pro 7 comes in two different colours to choose from.

So for those looking for a good sized screen that is somewhere between tablet and laptop, then the Surface Pro 7 is a good pick.

It’s more reliable than many other 2-in-1 laptops out there, and it has all the power of a laptop wrapped up into the form of a tablet. All you need to do is prop it up with the keyboard and you’re good to go.

Definitely one of the best looking laptops on the market.
Quad Intel Core i5 processor works well.
Can easily be upgraded to suit your preference.

Quite expensive for what you’re actually getting.
Battery life isn’t quite as good as advertised.

Verdict: Although it is expensive, it is still one of the best 2-in-1 laptops on the market.

The truth is that when it comes to fully detachable laptops, Microsoft have the best options around. The gap where Apple don’t really want to tread – they want to keep their iPad line and Macbook line separate – leaves a real gap in the market for Microsoft to fill.

And the Surface Book 3 is a pretty impressive device in its own right. For gamers, it’s going to be one that stands out as you can easily use it with your Xbox controller. This means that if you want to set it up and play some games on it too, then it’s simple to do so.

There have been a few subtle improvements to this laptop over the previous Surface Book 2. It has a better battery life (but still not great), as well as improved processors – both the GPU and CPU in the updated Surface Book 3 are a little better than before.

It is really easy to use this laptop both for work, but also switch into tablet mode when you need to as well. So, it only makes sense that it’s an addition to the list.

Verdict: This isn’t a budget 2-in-1 laptop, but if you’re looking for a high end design and strong performance, it’s a good choice.

If you’re looking for a more budget friendly 2-in-1 laptop, then this Acer Aspire model might be more suitable. It doesn’t have the power of the Surface Pro, but it’s a lot cheaper. And for some people, it would prove to be a better, more cost effective choice.

The laptop comes with 4GB of RAM and an i3 processor, with 128GB of storage. Sure, the specs aren’t the most impressive compared to others out there, but it’s a much more affordable option than many others out there.

Although it’s a lot cheaper than the others listed, that doesn’t mean that you’re compromising on quality. It has the same high quality HD IPS display that more expensive, and it’s a relatively lightweight design for you to use too. It comes fully installed with Windows 10.

The keyboard is quite large, but it doesn’t stop the laptop itself from being quite portable and easy to carry around with you. It has a CPU cooling system which helps to keep it cool yet also quiet at the same time. The 2160×1440 resolution screen combines with the 2 front facing audio speakers to give a good experience too.

Not everyone needs a 8GB laptop for their day to day use. If you’re just looking for something you can casually browse the internet with and watch some videos, then this Acer Alpha 12 SA5-271 would be a great choice.

The screen is the perfect size for a laptop/tablet hybrid.
Touchscreen works well and is super responsive.
Excellent value for what you’re paying.

The keyboard isn’t as solid as it should be.
Quite heavy when compared to tablets.

Verdict: When it comes to finding something cost effective, Acer often make the best convertible laptops. 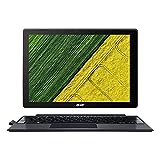 Like the Surface Pro, they manage to pack a surprisingly impressive amount of power into a small device. With the same 8GB RAM & i5 processor specs as the Microsoft laptop too, there isn’t much to choose between the two. It also has a good quality display that’s a good choice for those who want something interactive.

Another good thing about the SW512-52 is that it’s essentially noiseless, with very little cooling technology in place. This means you won’t need to deal with overheating or loud fans within the laptop itself, as there’s none of this with this model, even if you’re using it for prolonged periods of time.

The only downside to this laptop in comparison to the Surface Pro 7 is that the battery life isn’t as good. So whilst it’s pretty similar in most other areas, this is the only thing about this model that lets it down a little.

Can be easily used with just one hand.
A very quiet and low noise laptop.
Well made with a solid build quality.

Touchscreen display could be more colourful.
Could do with a little more power.

Verdict: This model has a completely detachable keyboard, so it might be the best option for you.

For those who aren’t looking for a proper laptop, then the Acer One S1003 might be more suitable than any other that I’ve mentioned here.

It would prove to be the best option for someone looking for a tablet, which has the added bonus of being used as a Notebook on occasion when you really need to. It’s not good for long term use as a Notebook, but it could be used for emails etc.

In many cases, an expensive detachable laptop might not prove to be the best choice. If you only really need a tablet that can be used as a Notebook on occasion, then this Acer device might be your best bet.

Can’t get much more than this for the price.
The keyboard is well designed and easy to use.
The full HD display is pretty good too.

Verdict: Although many people will want something much more powerful, there’s nothing wrong with this Acer laptop.

How does a detachable laptop work?

Essentially, a detachable laptop is a high powered tablet that can be connected to a keyboard via a docking system. For it to be classified as a detachable, it must have a full keyboard for you to use with the device. When you connect the tablet to the keyboard, you can then stand it up, and use it like you would a normal laptop.

What is the point of a detachable 2 in 1 Laptop?

The main point of a detachable laptop is that you’re going to get the best of both. If you already use a tablet in the evening to scroll through the internet, then you’ll know how much more convenient they are than a standard tablet. With a detachable, you’ll be able to use a laptop during the day to get all of your work done, and a tablet in the evening for casual use too.

Can a detachable 2 in 1 laptop be used for gaming?

If you’re looking for a laptop for gaming, then it’s best that you buy a gaming laptop specifically, and then buy a separate tablet for casual use. There are no good 2-in-1 laptops that can be used for serious gaming. However, they are perfect for gamers like Temple Run and Candy Crush!

Which detachable laptop is best?

For those who don’t know which option to go for, then it’s always a good idea to play it safe by opting to go for a Microsoft Surface Pro. They are always at the top of the list when considering this style of laptop.

Is Apple making a detachable 2 in 1 Laptop?

It doesn’t look like Apple are making a detachable laptop any time in the near future. It’s not really their style to do this, plus they have a ton of people who want both their Macbook’s and iPads. So giving people both in one would probably cost them sales in the long run.

In conclusion, getting a detachable laptop is a really good idea for people who spend time in the evenings scrolling through the internet. It can give you the ability to use a tablet whenever you want to, and switch this to a laptop whenever you need it as well. It’s not the best choice for a work laptop, as they tend to be pretty small in size. But for some people, this type of laptop will be the best option.

Now TV stick not working? Try these 5 steps to fix it

How to Measure Your Laptop Size – The Full Guide