When you’re looking to buy a new laptop that will last, you need to have a decent budget. For many people, spending more than £1000 is overkill, as you can often get a laptop that suits all of your needs for less than this. For many people, a £900 laptop is going to give you everything you need, and you probably won’t need to spend more than this.

Now, let me get started by saying that the Pixelbook won’t be for everyone. If you’re attached to the Windows operating system, then you’ll need to look at another laptop. And if you’re attached to the Mac OS then well.. just buy a Mac! However, if you’re open to using a different OS, or you have no idea what I’m even talking about, then here’s why I think you should consider the Pixelbook Go.

Now, let’s look at the benefits of using a Pixelbook. The battery life is excellent in comparison to most other laptops out there. It has a really simple interface, so even if you’re not the most tech savvy, you’ll be fine using this. It’s more secure than a Windows laptop and you won’t need to worry about viruses. But above all, it runs fast! The Pixelbook series is known for it’s quick startup times and responsive system.

The negatives? Well, the main thing is that you can’t use programs like Microsoft Word. Or, if you’re interested in design, you won’t be able to download a lot of the programs you may need. There are Google equivalents of Word of course, but some people might be attached to using Microsoft versions.

However, for people who don’t use a lot of different programs on their laptop, you might be better off opting for this Pixelbook Go. It’s light, fast and it does everything that most people need. 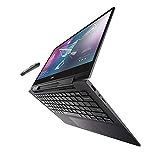 If you’re not entirely sure what a 2-in-1 (also referred to as a convertible laptop), essentially it’s a laptop and a tablet in one device. You can easily use it as a laptop, but you can also fold it back completely into a tablet and use the touchscreen, too. It comes with a pen for you to use, so if you think you might be interested in drawing on your laptop, then this model would make sense.

You can also flip this model into “tent mode” – combine that with the high quality display and it’s a perfect device to prop up and watch Netflix or YouTube on. So for those who intend to watch a lot of media, or want a good device to draw/sketch on, then this model would be perfect.

Although many people think that 2-in-1 laptops are less powerful than regular laptops, they’d be sorely mistaken. In the past, companies may have tried to get the smallest parts to make sure that it was light – however, this is no longer the case. This laptop comes with your standard 8GB of RAM and an impressive 512GB of SSD storage space for anything you need to save.

Overall, I think this Inspiron model is one of the better choices out there for people looking for something portable and lightweight.

If you’re looking for the best value for money, then it’s worth looking at brands like Acer and ASUS. By going with these cheaper brands, you’re typically going to be able to get more for your money.

The Acer A509 is a great example of this. You can pick up the A509 for less than £900, but it has the specifications of a much more expensive laptop. What do I mean by this? Well, with this model you actually get an i7 processor, which is a step up from an i5 processor and two steps up from an i3 processor. If you compare this to the cheapest Macbook’s, they actually come with an i3 processor. So you’re getting a lot more value for your money.

If you find the right model too, you can also get it with substantially more RAM than the standard 8GB. I say as a rule for most people nowadays you should be looking for 8GB as a minimum, but you can get this model upgraded with 16GB if you get the right price. So for those looking for the most value for money, you might want to consider the Acer A509.

Most Common Questions about Laptops

This is a good question, because £900 is a significant amount for anyone to spend on a laptop. However, it’s not quite enough to get yourself one of the top of the range models. Typically, Macbook Air’s start around the £1000 mark, and Thinkpad’s are a little bit more than this. However, it really depends on what you’re looking for from your laptop. If you’re just looking for something to browse the internet, write up documents and go through your emails on, then yes a £900 laptop will be fine. But if you want something you’re going to use extensively, with lots of different programs (Photoshop etc), then you might want to spend a little more.

Which laptop brand is the most reliable long term?

A common question amongst those buying a laptop is asking which brand is most reliable if you’re looking for a laptop to last you long term. The first thing I should say is that you should look at the specs more than the brand itself – all brands have released good and bad models of their laptops in the past. In terms of reliability, you’re typically best off going for a brand like Apple, which have great customer service. Or one of the more premium brand names, like HP, Dell or even Lenovo.

Which laptop brand is the biggest?

Actually, in the last few years the brand with the biggest market share has been Lenovo. This is obviously partly due to the fact that the brand is Chinese and very popular in China, however the brand has increased in sales in many Western countries too. After Lenovo, Dell and HP are the next two biggest selling brands, followed by Apple, ASUS and Acer. However, this is stricly laptops – if we include computers in the mix too, Dell and HP both outsell Lenovo by quite a margin.

Which OS should I choose?

For some people who aren’t particularly computer savvy, it pays to know what OS, or operating system, you’re going to use. The main choice that you have is between using Windows or opting for a different OS, like Mac or Chrome. This is essentially just the hardware that manages the programs that are on your laptop. Windows is by far the most popular, so many people want to stick with that – however, both Mac and Chrome OS can be a lot easier and smoother to use.

Which laptop is best for me?

To get the right laptop for your needs, you just need to think about what you want from a laptop. For most people, starting with the specs of 8GB of RAM and 256GB of SSD is good. Need something cheaper and won’t use your laptop extensively? Then you could drop from 8GB of RAM to 4GB. Need more storage space? Upgrade from 256GB to 512GB.

All in all, I know a lot of people aren’t interested in a laptop that operates on Chrome OS. However, for many folks (especially older folks that don’t need a ton of stuff on their laptop), I really think it’s worth considering a Pixelbook. However if not, then hopefully there are enough alternative options here for you if you’re looking for a £900 laptop.